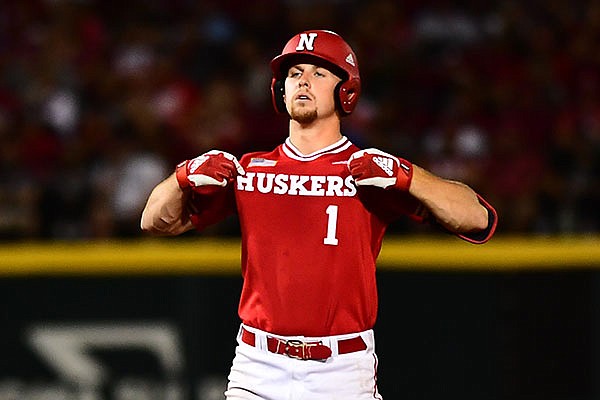 Nebraska's Spencer Schwellenbach celebrates after hitting a game-tying single during an NCAA regional game against Arkansas on Sunday, June 6, 2021, in Fayetteville.

The teams are scheduled to play again Monday at 6 p.m.

Nebraska relief pitcher Spencer Schwellenbach shut down Arkansas for 4 2/3 innings to lead the Cornhuskers to a 5-3 win over the top-ranked Razorbacks on Sunday night. Schwellenbach allowed one hit during his 65-pitch outing and worked around two walks in the ninth inning.

Christian Franklin drew a leadoff walk and Cullen Smith walked with one out, but Casey Opitz struck out and Jalen Battles popped up to the first baseman with the tying run on base.

Schwellenbach, the Big Ten player of the year who is also Nebraska’s starting shortstop, had a game-tying single during a three-run fifth inning that gave the Huskers (34-13) the lead. Nebraska went ahead 5-3 on Griffin Everitt’s two-out single.

All five Nebraska runs came against Arkansas starter Lael Lockhart, who was taken out of the game after 4 1/3 innings. Lockhart (3-3) allowed 8 hits, 4 earned runs and struck out 5.

Ryan Costeiu replaced Lockhart after Schwellenbach’s single on a 1-2 pitch with one out. Costeiu, who inherited runners in scoring position, struck out Luke Roskam for the second out of the inning but gave up the go-ahead single to Everitt.

Arkansas (48-11) barely threatened after that point against Schwellenbach, who retired seven in a row after Robert Moore’s two-out single in the sixth. Moore was the Razorbacks’ only base runner against the right hander until the two ninth-inning walks.

Schwellenbach (3-1) entered the game in a high-stakes situation in the fifth inning. Jalen Battles walked and went to third base on Matt Goodheart’s single against Nebraska starter Kyle Perry.

Schwellenbach struck out Cayden Wallace for the second out and Charlie Welch flied out to end the inning.

Arkansas went ahead 3-1 in the third inning. Wallace’s one-out single scored Battles to tie the game, and Wallace and Goodheart scored on a combination wild pitch by Perry and throwing error by Everitt, the Nebraska catcher.

Perry gave up 3 runs (2 earned) on 3 hits and 3 walks in 4 1/3 innings. The left hander had pitched just six innings prior to Sunday’s game.

The Huskers went ahead 1-0 in the first inning when Jaxon Hallmark homered with one out. Hallmark added a sacrifice fly in the bottom of the third to pull Nebraska within 3-2, but the Huskers had a pair of base-running mistakes that potentially cost them a bigger inning.

Nebraska was thrown out four times on the bases, including twice when Mojo Hagge flied out to begin inning-ending double plays. Wallace, the left fielder, threw out Everitt at second base in the second inning, and the center fielder Franklin threw out Brice Matthews at first base in the eighth.

The Huskers defeated NJIT 18-4 in an elimination game Sunday afternoon. Nebraska was sent to the loser’s bracket with a 5-1 loss to Arkansas on Saturday.

Christian Franklin drew a leadoff walk in five pitches, then Robert Moore advanced him to second on a swinging bunt back to the mound. Franklin then advanced to third on a wild pitch to Cullen Smith.

Smith drew a four-pitch walk, putting runners on the corners with one away. Casey Opitz struck out and Jalen Battles popped out to first to end it.

Spencer Schwellenbach went 4 2/3 innings and allowed only 1 hit, walked 2 and struck out 4, earning his third win of the season.

The teams will meet Monday at 6 p.m. in a winner-take-all game. The winner advances to Super Regional play.

Connor Noland struck out Cam Chick looking to open the home half of the 8th. After a Brice Matthews single, Mojo Hagge lined out to Christian Franklin in center field.

Franklin threw to first and doubled off Matthews to end the inning. It is the fourth out the Cornhuskers have run into on the base paths.

Arkansas has Franklin, Robert Moore and Cullen Smith due up.

Nebraska pitcher Spencer Schwellenbach is rolling right now. Not only did he strike out Brady Slavens to end the top of the 8th, he ran into foul territory and caught a Cayden Wallace popup near the plate after slipping and falling on his backside.

Schwellenbach has allowed 1 hit in 3 2/3 innings so far and thrown 33 of 44 pitches for strikes.

Connor Noland is back on the mound for the Razorbacks.

Pretty efficient inning from Connor Noland. The first batter he faced flew out to the warning track in center field, Luke Roskam flew out to left, then Noland struck out Griffin Everitt.

Arkansas has Cayden Wallace, Charlie Welch and Brady Slavens due up in the top of the 8th.

Razorbacks go down quietly. Casey Opitz and Jalen Battles flew out to center field and Matt Goodheart flew out to left.

Ryan Costeiu walked Brice Matthews to begin the home half of the inning, then an error on Robert Moore allowed Mojo Hagge to reach first safely. Both runners advanced on a wild pitch before Costeiu got out No. 1 via strikeout.

On the first pitch Joe Acker saw, he popped out to first, then Jaxon Hallmark flew out to left to leave two men in scoring position. Big sequence there from Costeiu.

Spencer Schwellenbach struck out Brady Slavens to begin the inning, then Christian Franklin bounced out to third before Robert Moore added a two-out single.

Cullen Smith lined a ball between Cam Chick and second base, but Chick made a terrific diving stop and flipped to second for the third out.

Ryan Costeiu is back on the mound for the Razorbacks.

Lael Lockhart tallied his fifth strikeout of the night to begin the home half of the inning before Joe Acker picked up his second hit of the night. Lockhart then knocked down a comebacker, but his underhand toss to first was not in time, putting two Cornhuskers on with one out.

Spencer Schwellenbach singled to left-center field to tie the game, and he advanced to second on Cayden Wallace's throw.

Ryan Costeiu came on in relief with two men in scoring position and struck out Luke Roskam with a 95 mph fastball up in the zone, but Griffin Everitt singled to right on a 2-1 pitch to give the Cornhuskers a two-run lead.

Costeiu struck out Cam Chick to end the inning.

Casey Opitz popped out to first to begin the inning, Jalen Battles walked on four pitches then Matt Goodheart laced a single into right-center field.

Kyle Perry's night is done. Spencer Schwellenbach, who began the game at shortstop, came on in relief and struck out Cayden Wallace on a pitch down and away, and got Charlie Welch to hit a lazy fly ball to center.

Razorbacks stranded a pair and have left three men on tonight.

Solid inning of work from Lael Lockhart in the fourth.

He struck out Griffin Everitt swinging on three pitches, got Cam Chick to ground out to second then allowed a single to Brice Matthews before working a ground ball back to the mound to end in the inning.

Lockhart has given up 5 hits and struck out 4 over 4 innings. He has thrown 59 pitches, 44 for strikes.

Razorbacks go quietly in the top of the fourth. Christian Franklin and Robert Moore both struck and Cullen Smith fouled out to the catcher, who made a nice snowcone-type catch.

Lael Lockhart returns to the mound having thrown 48 pitches – 34 for strikes – over his first three innings.

Logan Foster reached first base safely on a throwing error by Cullen Smith, Joe Acker doubled down the line in left, then Jaxon Hallmark lined out to right, scoring Foster and trimming Arkansas' lead.

Spencer Schwellenbach hit a ground ball to Brady Slavens at first, then he fired home to gun down Acker by 8-10 feet for out No. 2. Out No. 3 was a beauty, too.

Luke Roskam grounded a ball deep in the hole for Jalen Battles, whose throw to first was too late, but Slavens fired to Lael Lockhart, who was covering third on the play, to nail Schwellenbach.

Nebraska has made three outs on the base paths tonight.

After Casey Opitz flew out to shallow right on the first pitch he saw, Jalen Battles drew a six-pitch walk then Matt Goodheart hit a flare single into left, putting runners at the corners.

Cayden Wallace laced a single into left-center field to score Battles and tie the game. He advanced to second on a fielding error by Jaxon Hallmark in center.

Kyle Perry's wild pitch to Brady Slavens brought Goodheart home, then a throwing error by the catcher on the same play plated Wallace. The crowd erupted as the Razorbacks grabbed a 3-1 lead.

Griffin Everitt led off the home second with a sharply hit single to right, then Cam Chick hit a ground ball up the middle that Jalen Battles bobbled, putting two men on. Had he fielded it cleanly, it may have resulted in a big double play.

Brice Matthews then went down swinging. He squared around to bunt on the first two pitches he saw – both strikes on the inside corner – but pulled the bat back twice.

Mojo Hagge later lined out to Cayden Wallace in left. Wallace, in left field for the first time, then threw to second to double off Everitt and end the inning.

Robert Moore drew a two-out walk, but Cullen Smith grounded out to third to end the top half of the second.

Jaxon Hallmark hit a one-out home run off of Lael Lockhart to straightaway center to get the Cornhuskers on the board first.

Lockhart, though, bounced back and struck out the next two batters he faced to limit the damage. Nebraska leadoff hitter Joe Acker also grounded out to second base.

Cornhuskers starter Kyle Perry sat the Razorbacks down in order in the top of the first. He struck out Matt Goodheart and Charlie Welch looking and got Cayden Wallace to fly out harmlessly to center field.

Lael Lockhart is heading to the mound for Arkansas.

Arkansas' Brady Slavens is active and will start tonight at first base. He has missed the last five games with an ankle injury. Slavens will hit cleanup.

The game will air on ESPNews.