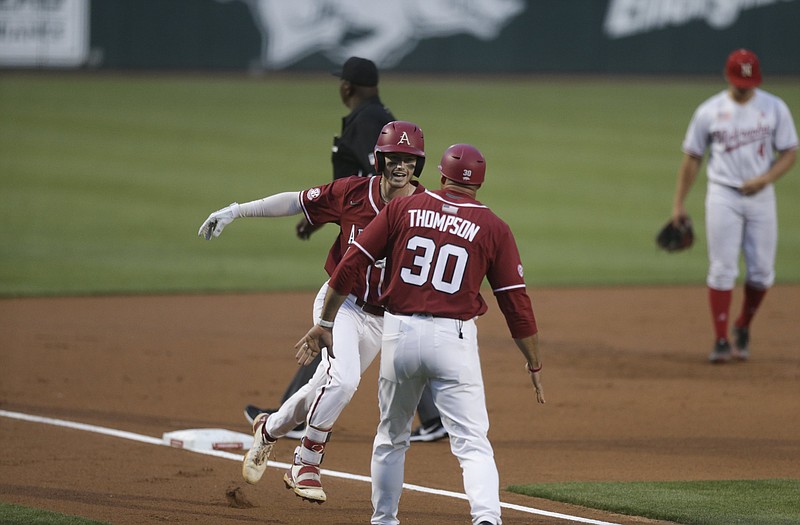 Arkansas infielder Matt Goodheart (10) runs home for a score Saturday during the first inning in the second game of the NCAA Fayetteville Regional at Baum-Walker Stadium in Fayetteville. - Photo by Charlie Kaijo of NWA Democrat-Gazette

FAYETTEVILLE -- The top-seeded Arkansas Razorbacks broke the school home run record and used the combination of Patrick Wicklander and Kevin Kopps successfully once again to advance to the championship round of the NCAA Fayetteville Regional on Saturday.

Playing deep into the night, the No. 1 University of Arkansas outlasted No. 19 Nebraska 5-1 before a sellout crowd of 11,084 at Baum-Walker Stadium.

The Cornhuskers (32-13) will face NJIT in today's elimination game while the Razorbacks (48-10) won their 10th consecutive game and will await the winner in an 8 p.m. game.

"It's better than being 1-1 and having to win three straight," Arkansas Coach Dave Van Horn said. "So we didn't play very good tonight. We won, and I feel fortunate and look forward to getting back on the field."

Both teams managed five hits, but the game moved at a leisurely pace and lasted 3:16.

Arkansas got on top with its first batter of the game, and Matt Goodheart's leadoff home run was a landmark shot.

The opposite-field home run to left center off right-hander Chance Hroch (5-3) represented the school record 99th of the season for the Razorbacks, breaking the record they held with the 2018 team.

"I didn't know," Goodheart said. "I hadn't been keeping track of that. But Dylan Leach told me when I got back in the dugout."

Goodheart's home run was his 13th of the season -- his first since May 9 in a 5-3 win over Georgia -- and it tied him with teammates Christian Franklin, Robert Moore, Brady Slavens and Cayden Wallace for the team lead. Goodheart also had a leadoff home run on April 14 vs. Arkansas-Pine Bluff.

Six Nebraska pitchers issued 10 walks, setting a new season high for the Cornhuskers, and two of those walks came around to score.

"It was jumping all around back there," Van Horn said. "It was extremely frustrating. I think it cost both teams a lot of pitches."

Said Nebraska Coach Will Bolt, "We had the fewest walks in the Big Ten Conference this year. We've been a strike-throwing team all year long, so pretty uncharacteristic there for sure."

Wicklander (6-1) got the Razorbacks through 5 innings, then Kopps came on for his fourth outing of 4 or more innings this season to notch his 11th save to go with his 11 wins.

The left-hander Wicklander bounced back from his short outing against Vanderbilt in the SEC Tournament. He allowed a leadoff single in the sixth to Joe Acker on his 92nd and final pitch.

"He came at you with three pitches," Nebraska infielder Luke Roskam said. "A slider, a curveball and a good fastball. He just attacked you. I mean, we hit some balls hard too and right at guys. It's just how the game goes."

The Cornhuskers notched only a pair of singles off Wicklander, but they were able to work his pitch count up. He walked two batters, struck out seven and Nebraska did not get a runner to second base off him.

However, Acker advanced to second on Spencer Schwellenbach's ground ball out against Kopps for the second out of the sixth, then scored on Luke Roskam's opposite-field single to make it 3-1.

Kopps worked around a leadoff double by Cam Chick in the seventh and a one-out single by Jaxon Hallmark in the eighth. He retired the side in order in the ninth.

Kopps, working on a second consecutive day after throwing 24 pitches on Friday, threw 71 against the Cornhuskers.

The Razorbacks piled on a couple of more runs off Hroch in the second inning. Designated hitter Charlie Welch singled to open the frame, raising his batting average back to .400, and he moved up on Jalen Battles' one-out walk.

Braydon Webb ripped a single to left field, giving Welch plenty of time to score from second base. Goodheart walked to load the bases, and Wallace followed with a high fly ball to deep center on which Battles tagged up and easily scored.

Arkansas' 36th sacrifice fly of the season made it 3-0 and bumped the Razorbacks into a tie for second nationally behind Campbell, with has 38 sacrifice flies.

After Nebraska pulled within 3-1 in the top of the sixth, the Razorbacks scrapped together two runs in the bottom of the frame with a lot of help from the Huskers.

In fact, Arkansas did not get a hit in the uprising, which began with Battles reaching on a throwing error from deep shortstop by Schwellenbach. With two outs, Wallace drew a four-pitch walk from Emmett Olson, ending his evening.

Lefty reliever Jake Bunz had trouble locating and walked Cullen Smith to load the bases, then issued a four-pitch walk to Franklin to bring in a run. With Robert Moore at the plate, Bunz unloaded a low pitch that eluded catcher Griffin Everitt for a passed ball, allowing Wallace to score and make it 5-1.