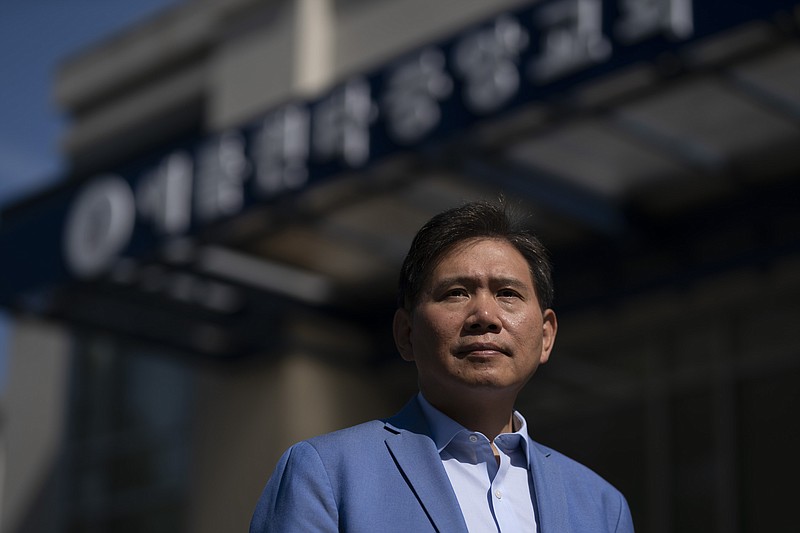 Pastor Byeong Cheol Han, who presides over the Korean Central Presbyterian Church of Atlanta, poses for a portrait outside the church on March 21 in Atlanta. (The Washington Post/Elijah Nouvelage)

A mix of emotions churned inside Pastor Byeong Cheol Han in the days after the March 16 Atlanta shootings, when a white gunman stormed three metro-area massage spas and killed eight people, six of whom were women of Asian descent.

Like many in the Korean American community, Han, senior pastor at Korean Central Presbyterian Church in Atlanta, felt grief, sorrow and anger, but also a deep sense of disappointment as he scrambled to organize a prayer vigil for that next Sunday, March 21, outside Gold Spa, where three victims of Korean descent -- Hyun Jung Grant, Suncha Kim and Soon Chung Park -- died. A fourth woman of Korean descent, Yong Ae Yue, also died in the same shooting rampage at nearby Aromatherapy Spa.

While Han felt it was vital for his sermon to condemn white supremacy and systemic racism -- problems that he believes fueled the alleged shooter -- many other ministers whom he knows in the wider Korean American Christian community discouraged him from doing so. "I got several phone calls from my Korean past colleagues, saying, 'Pastor, this is a very delicate or sensitive issue, we should be very careful to deal with this,'" Han, 57, said. Other colleagues, he said, didn't even bother to return his calls despite his efforts to galvanize fellow Korean American faith leaders in the wake of the killings.

Although he knew he would be going against the grain of most Korean American Protestant churches, which serve as important yet socially conservative hubs for Korean diasporic communities nationwide, Han decided to stick to his plans for his sermon at the March 21 service, a gathering of more than 100 that included, to his surprise, faces from outside the Asian American community.

"This is a time for healing, but healing begins when we boldly confront and admit that we have a problem," he told the crowd that Sunday. "I believe that God will only help us heal and reconcile once we admit that our society is deeply wounded, plunged in racism and chauvinism." Han went on to denounce white supremacy, pervasive silence among Korean Americans on racial and social justice, and the model minority myth -- a stereotype that hard-working Asian Americans have overcome discrimination to achieve prosperity, more so than Black or Hispanic communities.

"We cannot remain silent anymore," he preached. "Can't you hear the words of George Floyd, who died at the hands of a white police officer, screaming, 'I can't breathe'? We want to live where we can breathe."

With his outspoken support of the Black Lives Matter movement and politically progressive views, Han believes he is still firmly in the minority among Korean American Christians, who historically were more likely to identify as evangelical and politically conservative compared with other Asian Americans, according to Pew Research. But in this moment, as calls for racial justice have gone mainstream and as Asian Americans live in fear of violent hate attacks, there is a passionate and growing movement among Korean American pastors nationwide who are pushing their congregations to rethink their role in the fight for social justice.

To some progressive Korean American faith leaders, the recent increase in interest in these concerns within their religious communities is the product of decades of groundwork.

Pastor Chongho James Kim, 63, senior pastor at First United Methodist Church in the Flushing neighborhood of New York, said that his ministry is informed by the history of his homeland and the theology of his adopted country. Kim immigrated to the United States in 1973, during a period considered a "dark age for democracy" in South Korea. From the 1950-1953 Korean War through the mid-1990s, a series of authoritarian leaders, propped up at times by U.S. political and military interests focused on deterring North Korea, worked to brutally suppress the activist-led pro-democracy movement.

While Kim was enrolled in seminary at Boston University, he continued to follow events in South Korea, observing "how contemporary imperialism affects people of my homeland, how militarism and military dictatorship operates."

"I was exposed to theological training which values the liberation [from] human suffering," he said, referring to progressive, Black, liberation and feminist theologies, which showed him how Korean Americans' plight in the United States was entwined with, not competing against, the interests of other marginalized groups.

'I TAKE IT PERSONALLY'

"Growing up in this country as a youth, prejudice and racism are the issues that I had to battle with," Kim said. Now, "anything to do with the rights of undocumented people or the Black Lives Matter movement, I take it personally." Kim went on to mentor fellow ministers, including Han, who called him "a pioneer" among progressive Korean American clergy.

At times, preaching with a socially liberal bent -- addressing concerns including [LGBT] rights or support for undocumented immigrants -- has come at a cost for pastors like Kim, who said he has been rejected by some congregations and called a "communist and worse names," and Han, who said peers have described him disparagingly as "very political."

"Our religious community has to have repentance," said Jung, who has worked with Kim over the years. "Racial discrimination and violence can come to you and me, it doesn't matter if you're an elite or a bishop or a street market vendor ... The Atlanta shootings were a wake-up call for us."

The tragedy, part of a rising wave of reports of anti-Asian violence that comes on the heels of a nationwide reckoning on racial identity, is spurring more Asian American churches, including Korean American congregations, to open up new lines of dialogue.

Han, in Atlanta, said he's feeling hopeful as he educates and collaborates with other Korean American clergy and community groups in his metro area via webinars, while also compiling a manual on how to respond to anti-Asian hate crimes.

Jung, who works with more than 300 Korean American and Korean Methodist churches as a bishop, said he's seeing "innovative and creative" responses from Los Angeles to the Dakotas.

"I know it's the darkest time, a very disappointing time," Jung said. "I know it's not easy, but faith makes a difference. This is a real chance, and God calls us to such an emerging issue that the church and faith community need to pay attention to."