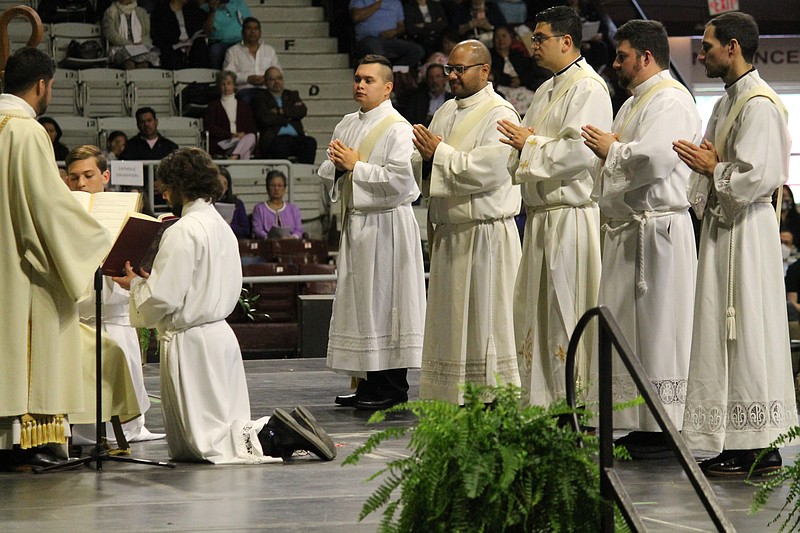 Five men were recently ordained to the Catholic priesthood at Little Rock's Barton Coliseum, joining the ranks of more than 130 priests ministering to flocks in Catholic parishes across Arkansas.

The Most Rev. Anthony Taylor, bishop of the faith's Diocese of Little Rock, was the celebrant for the ordination May 29 with Archbishop J. Peter Sartain and Bishop Francis Malone of the Catholic Diocese of Shreveport as co-celebrants.

The men ordained were Rev. Omar Galvan Gonzalez, Rev. Emmanuel Torres, Rev. Ben Riley, Rev. Brian Cundall and Rev. Alex Smith. They join the priesthood after responding to the call to ministry, discernment and years of study in seminary.

They are entering the priesthood more than a year into the covid-19 pandemic, a time that has seen clergy of all faiths testing and improvising ways to provide worship and community to physically separated church members.

The ordinations come two weeks after the diocese made the first change to its mask rules since March 2020. Masks became optional, though recommended, during Mass at church.

"These ordinations provide us with a golden opportunity to gather as a diocese with plenty of room to spread out," Taylor said in a recorded video. "What a joy [the ordinations] will be ... after this dark year of so many restrictions."

The priests, each a deacon at churches in the diocese, have since received their first assignments, and have celebrated or will celebrate their first Mass as priests this month.

Smith has been assigned to be associate pastor at Fayetteville's St. Joseph Catholic Church, and at Saints Peter and Paul Catholic Church in Lincoln.