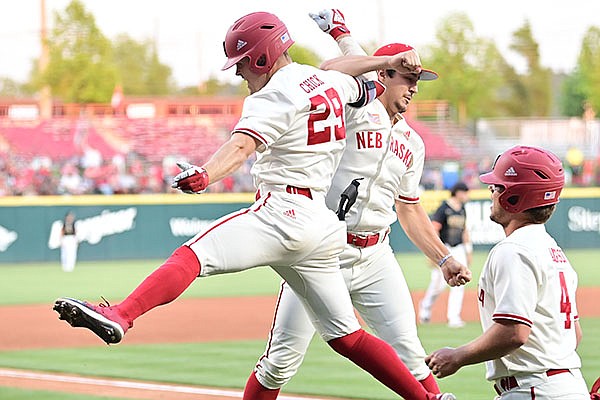 Nebraska's Cam Chick (left) is congratulated after he hit a three-run home run during the fourth inning of an NCAA regional game against Northeastern on Friday, June 4, 2021, in Fayetteville.

FAYETTEVILLE — A pair of Power 5 conference champions will face off Saturday night at Baum-Walker Stadium.

Nebraska defeated Northeastern 8-6 on Friday to set up a non-elimination game against Arkansas at 8 p.m. Saturday. The Razorbacks advanced to the winner’s bracket game with a 13-8 win over NJIT earlier in the day.

The Cornhuskers (32-12) overcame a 4-0 deficit in the third inning and won their first postseason game under second-year coach Will Bolt. As a player for the Huskers, Bolt was a captain and four-year starter under Arkansas coach Dave Van Horn.

Arkansas vs. Nebraska: How to watch and listen, forecast, pitching matchup, team comparisons

"It’s going to be a great environment," Bolt said. "This is one of the best environments in college baseball. Arkansas’ got a really good team and they play at an extremely high level, especially in this venue.

"We’re going to have our hands full tomorrow night and we just need to come out ready to rock from first inning.”

Cam Chick’s three-run home run put Nebraska on the board in the fourth inning. The Huskers tied the game 4-4 when Jaxon Hallmark tripled and scored on a sacrifice fly in the fifth.

Nebraska scored three runs in the sixth inning to take a 7-4 lead, and went ahead 8-4 in the seventh when Luke Roskam scored on a double steal attempt.

Northeastern (36-11) pulled within 8-6 in the eighth inning. Ian Fair singled home a pair of runs with one out, but the Huskies stranded the bases loaded when Jeff Costello grounded out to first base.

Northeastern put the tying run on base in the ninth when Nebraska closer Spencer Schwellenbach allowed a leadoff single and hit a batter with two outs. The game ended on Ben Malgeri’s groundout to Schwellenbach.

Schwellenbach, the Big Ten player of the year, pitched 1 2/3 innings to earn his 10th save.

The Huskers were picked up by junior right hander Koty Frank, who earned the win with 3 2/3 innings of scoreless relief. Frank walked two and did not allow a hit.

"We really couldn’t get to that first bullpen arm super well and they continued to put runs on the board, and we couldn’t get it done late in the game," said Fair, the Northeastern first baseman was finished 2 for 4. "I think if we are able to get to that second arm it might be a little bit of a different game.”

Frank entered the game with runners on base and one out. Costello flied out in the first pitch against him and Max Viero followed with a groundout on the next pitch.

The Huskers tied the game in the bottom of the inning.

"I felt like it was time to go make a change and it was huge for Koty to come in and get two pitches, two outs right there and get his feet kind of settled in the game," Bolt said. "Obviously we grabbed the momentum immediately after that.”

Northeastern took a 2-0 lead on Danny Crossen’s solo home run to lead off the second inning. The Huskies added three runs in the third. Jared Dupere singled home a pair of runs, and Dupere scored from second base on a Povich wild pitch that ricocheted to the Nebraska dugout.

"I loved the at bats," Northeastern coach Mike Glavine said. "They punched us out a couple of times early, but I felt like we got to see (Povich's) stuff and try to grind through some of those at bats."

Sebastian Keane allowed 3 runs, 4 hits and 1 walk, and struck out 4 in a 4-inning start for the Huskies. Wyatt Scotti took the loss with a 1 2/3-inning relief appearance that included four runs by the Huskers.

Northeastern will play NJIT on Saturday at 2 p.m. in an elimination game.