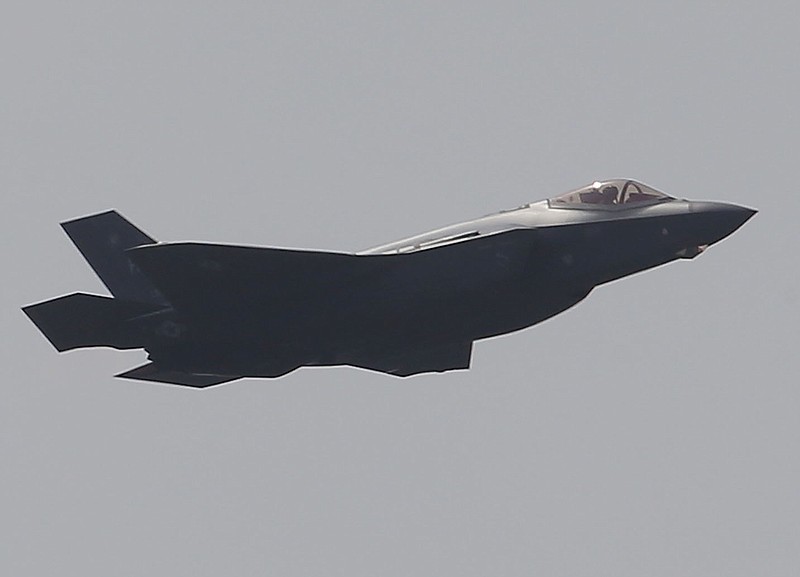 An F-35 Lightning II performs at the Paris Air Show in June 2017. The U.S. Air Force said Thursday, June 3, 2021, that Ebbing Air National Guard Base at Fort Smith has been selected as the preferred location for an F-35 training center for Foreign Military Sales participants and the new home for a Singaporean F-16 Fighting Falcon training unit. (AP/Michel Euler)

FORT SMITH -- American pilots and airmen from around the world are scheduled to begin training side by side in Fort Smith, a move officials believe will bring hundreds of new residents to the area.

The Air Force selected Ebbing Air National Guard Base as the preferred location to set up a Lockheed Martin F-35 Lightning II training center for Foreign Military Sales participants and the new home for a Singaporean General Dynamics F-16 Fighting Falcon training unit, according to an Air Force news release on Thursday.

The base, home to the 188th Wing of the Arkansas Air National Guard, had been selected in July as one of five possible sites to host this mission.

Barbara Barrett, then secretary of the Air Force, signed a memorandum in July to establish a permanent Foreign Military Sales training center for up to 36 F-35s and Republic of Singapore Air Force F-16s based within the continental United States.

Foreign Military Sales is a security assistance program authorized by the Arms Export Control Act. The act allows the U.S. to sell defense equipment, conduct training and provide services to a foreign country when the president deems that doing so will strengthen U.S. national security and promote world peace, according to the news release.

Singapore's air force is an F-35 Foreign Military Sales customer that wants its F-16 squadron, currently at Luke Air Force Base in Glendale, Ariz., with its F-35 aircraft at a long-term site.

The new training center will have a capacity for up to 36 fighter aircraft, according to the release.

Mayor George McGill said the training mission will probably be one of the largest economic development projects in the state, with it potentially generating "close to $1 billion" in yearly economic impact to the River Valley region.

"Realize that they're going to be bringing families here," McGill said. "At one point, I heard numbers up to 300 to 350 people that would be coming to man that operation, so you're talking about housing developments. You're talking about spending on just about everything that people would need."

The new development at Ebbing would bring in more than 345 U.S. military personnel, as well as about 180 Singapore unit members and about 300 dependents to the River Valley, according to a news release from the Fort Smith Regional Chamber of Commerce.

Gov. Asa Hutchinson said in a joint news release with Republicans Sen. Tom Cotton and Sen. John Boozman and 3rd District Rep. Steve Womack that the selection committee recognized Arkansas as "one of the most military-friendly states in the nation."

"Our tax exemption for military retirement income and our licensing reciprocity initiatives are valuable tools for recruiting qualified employees and their families to Fort Smith," Hutchinson said. "We have made significant progress toward building the most expansive fifth-generation airspace directly over Ebbing and an aerial range just four miles off the end of the runway."

Elected officials urged the Federal Aviation Administration to expand airspace, in addition to collaborating with state and community leaders for the past year to promote the the Fort Smith region for this project, the release states.

"We already are prepared to provide a first-rate quality of life for the families who will move here," Hutchinson said.

Boozman said the selection strengthens Arkansas' role in the defense of the nation.

"This is a win for the community and the entire state that was made possible in part thanks to the dedicated citizens who have tirelessly advocated the opportunities that exist here," Boozman said.

Cotton likewise attributed the development to years of hard work by the Fort Smith community, the federal delegation and Hutchinson.

"Singapore's F-16s and future F-35s will make good use of Arkansas' strong workforce and excellent facilities," Cotton said. "We're all grateful that the Air Force and our friends from Singapore have chosen Fort Smith for this vital new national security mission."

"Our strategic location, coupled with the River Valley's airspace, strong infrastructure, and capable workforce, will allow us to seamlessly support our valued allies and the next generation of air combat capabilities," Womack said. "I'm proud the Air Force and Singapore recognized this confluence of attributes."

The Air Force anticipates making the final decision in spring 2023.

The F-35 provides "next-generation stealth capabilities" to the U.S. and its allies with its "aerodynamic performance, advanced integrated avionics, enhanced situational awareness and increased survivability," the Air Force release states.