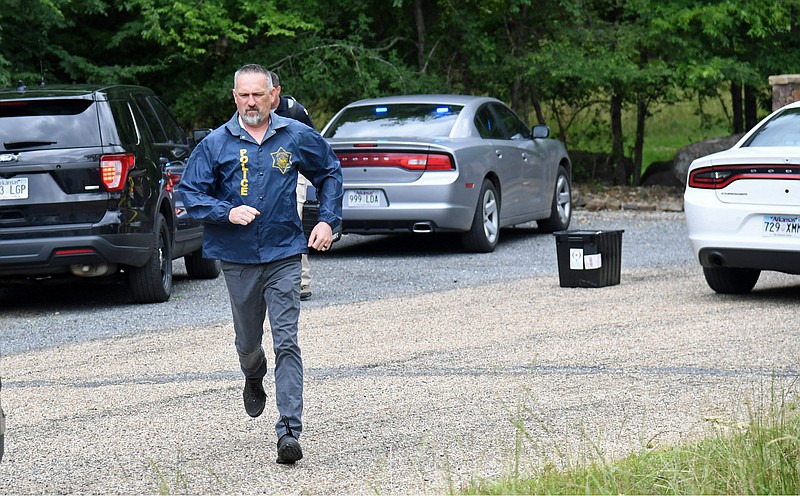 An Arkansas State Police investigator sprints to his car close to the scene of a shooting involving a trooper near 580 Woodview Lane on Wednesday. - Photo by Tanner Newton of The Sentinel-Record

HOT SPRINGS -- Arkansas State Police say a suspect who fled on foot after a motorcycle pursuit in west Garland County on Wednesday afternoon was shot and died at the scene after abandoning his bike in the 600 block of Woodview Lane.

"The shooting occurred after the suspect grabbed the trooper's gun during a struggle in an attempt to overpower the trooper," state police said in a news release.

The identity of the suspect was being withheld pending notification of next of kin.

At 12:34 p.m., the trooper, whose name was not released Wednesday, reported he was attempting to stop a motorcycle driver who was not complying with the trooper's emergency lights and siren to signal a traffic stop.

A short pursuit proceeded west along Airport Road toward the Lake Hamilton School District, where the motorcyclist turned off the highway onto Sunshine Road "still trying to evade the trooper," the release said.

"As the driver of the motorcycle reached the dead-end of Woodview Lane, he abandoned the bike and fled on foot in a northeasterly direction through a wooded area with the trooper following.

"The trooper's orders to stop were ignored by the suspect, at which time the trooper fired a Taser, a less than lethal device, in an attempt to stop the suspect.

"Special Agents of the Arkansas State Police Criminal Investigation Division have begun investigating the incident and will prepare a case file to be submitted to the Garland County prosecuting attorney," the release said.

"The prosecutor will determine whether the use of deadly force by the trooper was consistent with Arkansas laws."

As required by Arkansas State Police policy and procedures, the trooper has been placed on paid administrative leave while the investigation continues. The trooper's identity will be released later as the investigation progresses, the release said.

In addition to their regular duties, Arkansas State Police were filling in for Garland County sheriff's deputies at the time of the incident to allow them to attend the funeral services Wednesday for Sheriff's Sgt. William C. "Bill" House, 57, of Royal, who died May 23.

Wednesday's fatal shooting of a suspect is believed to the first in Garland County since 2016.

Former Mountain Pine Police Chief Chad King was wounded Jan. 27, 2016, in an exchange of gunfire that killed a parolee, Scott Scanlon, 52, of Hot Springs, during a confrontation in the Little Blakely Creek Road area in Jessieville.

King was shot three times in the leg and hip area by Scanlon, who was pronounced dead at the scene. King was placed on administrative leave, but later returned to work after former Prosecuting Attorney Terri Harris determined his use of deadly force was justified. 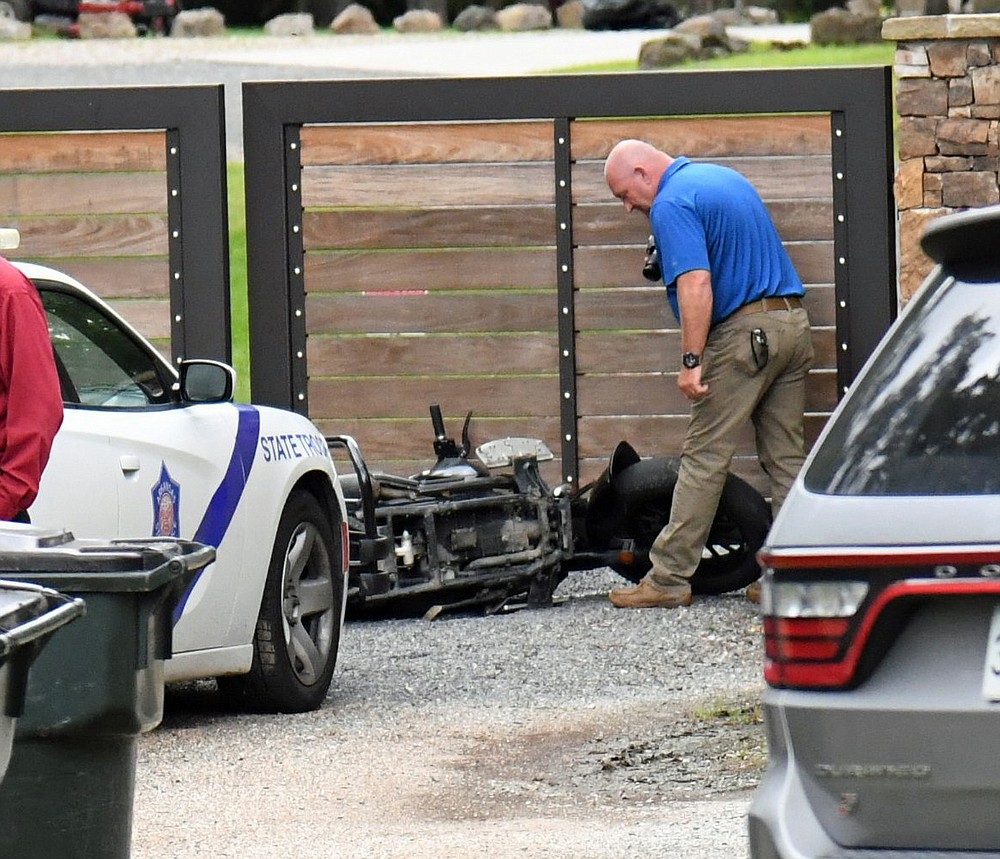 An Arkansas State Police investigator looks over an abandoned motorcycle believed to belong to a fleeing suspect at 614 Woodview Lane on Wednesday. - Photo by Tanner Newton of The Sentinel-Record
ADVERTISEMENT