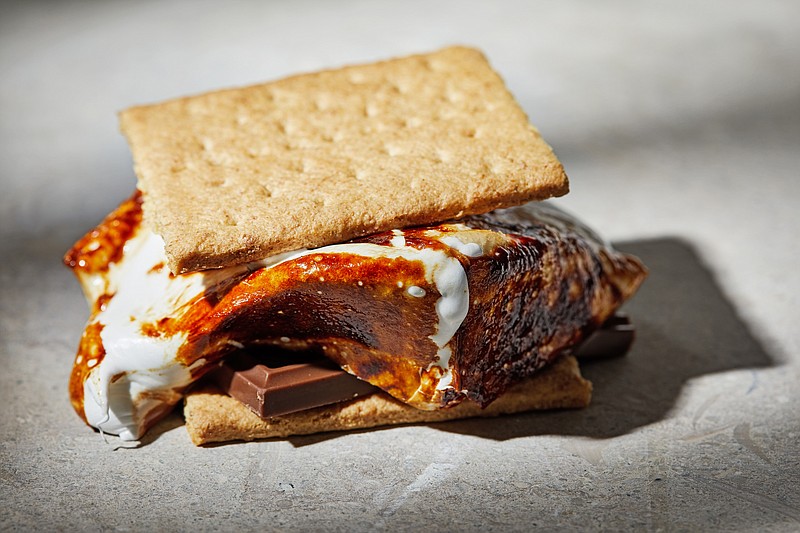 First printed in a Girl Scouts' handbook in 1927, the classic s'more has you toast a marshmallow on a stick over a campfire and then slide it off atop a piece of chocolate between two graham crackers. (For The Washington Post/Tom McCorkle)

Messy, sticky, warm and sweet, s'mores are a treat that needs no recipe. The combination of fire-roasted marshmallow, sturdy graham crackers and melty milk chocolate remains a classic for a reason.

Lately, it's become my go-to weekend snack thanks to a backyard fire pit and my longtime devotion to homemade marshmallows. My stepfather gathers the wood and builds a fire, my mom brings out blankets and we watch the flames dance in the darkness, skewering marshmallow after marshmallow for as many s'mores as our stomachs will allow.

But you don't need a fire pit, and, as Ina would say, store-bought marshmallows are fine. You can make s'mores over a campfire or beach bonfire, in front of a gas fireplace or stove burner, with a candle or microwave or propane torch. (But whatever you do, don't make s'mores without warming up the marshmallow so it can melt the chocolate a little bit — that's the best part!) 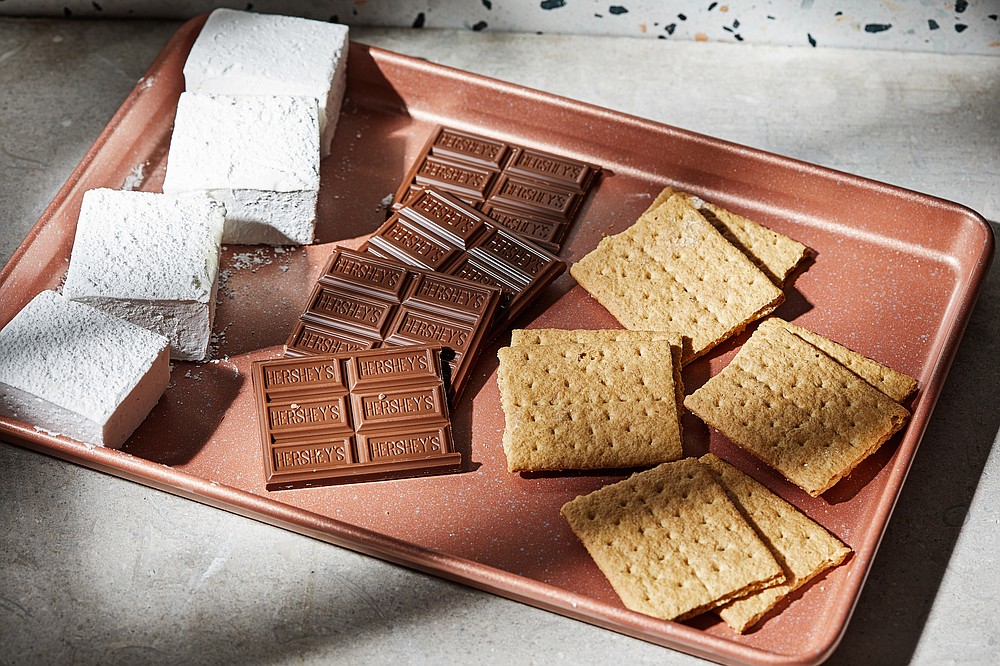 The classic s'more ingredients include marshmallows, milk chocolate and graham crackers. (For The Washington Post/Tom McCorkle)

You don't need to follow the traditional Girl Scout recipe, either. One night, when we ran out of graham crackers, I got creative with a couple of almost-stale chocolate chip cookies. I've made s'mores with gingersnaps and dark chocolate; saltines and nougat; cherry jam and chocolate-hazelnut spread; Oreos and banana slices; white chocolate and fresh raspberries; and an ill-fated, extremely messy affair involving KitKats. Nothing will replace the classic, but here are a few new tried-and-true formulas to help you mix it up, no matter where or when you decide you need s'more.

First printed in a Girl Scouts' handbook in 1927, the classic s'more has you toast a marshmallow on a stick over a campfire and then slide it off atop a piece of chocolate between two graham crackers. Milk chocolate is standard, as it melts more easily, and large store-bought marshmallows work well, but to make this combination even better, use 2-inch square homemade marshmallows. 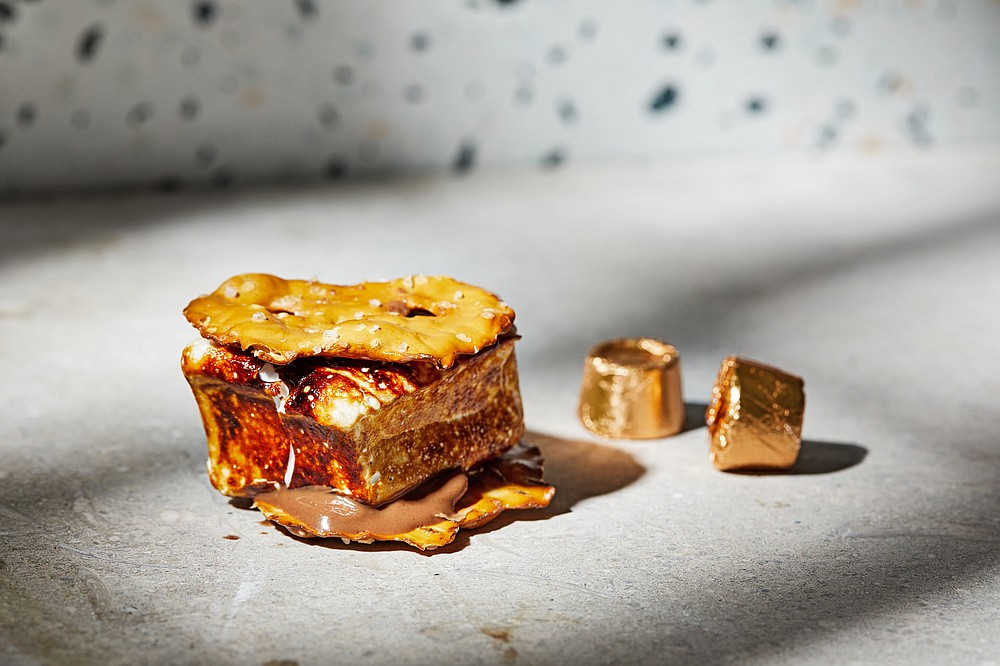 Pretzel Chip + Caramel-Chocolate Candy + Marshmallow: Use salty pretzel chips in place of the graham crackers, a Rolo or other caramel-filled chocolate candy instead of the chocolate bar and a large marshmallow for this riff. If you stick the unwrapped chocolate candy onto the tip of the stick before you slide the toasted marshmallow off, it will end up inside the hot marshmallow and melt just enough to let some of the caramel ooze out.

Coconut Wafer Cookie + Dark Chocolate + Coconut Chips + Marshmallow: Lay a thin dark chocolate bar on top of a coconut wafer cookie or flat coconut macaroon and top that with toasted coconut chips. Once the marshmallow is roasted, lay it on the coconut chips and dark chocolate, using another coconut cookie to slide it off the stick. 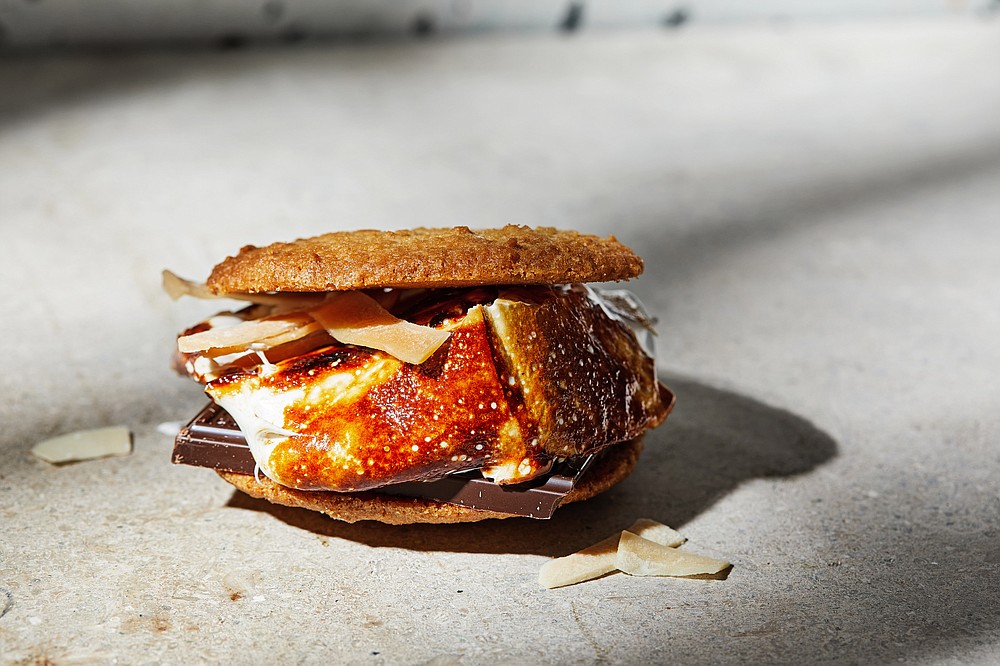 Chocolate Chip Cookie + Marshmallow: Any two chocolate chip cookies, plus a melty marshmallow, are an easy s'more cheat. A wafer-like chocolate chip cookie like Tate's works especially well for this as it holds its shape and provides a nice contrasting crunch, but try a homemade cookie recipe, too, for a softer s'more sandwich.

There's nothing wrong with store-bought marshmallows, but they can't compete with the homemade variety, which glisten as they toast and melt into soft, sweet puffs of perfect fluff.

Plush and squishy as a stress ball, a homemade marshmallow is pure sweetness and air. Pleasantly chewy, it melts easily on the tongue, a seemingly magical alchemy of sugar and protein. 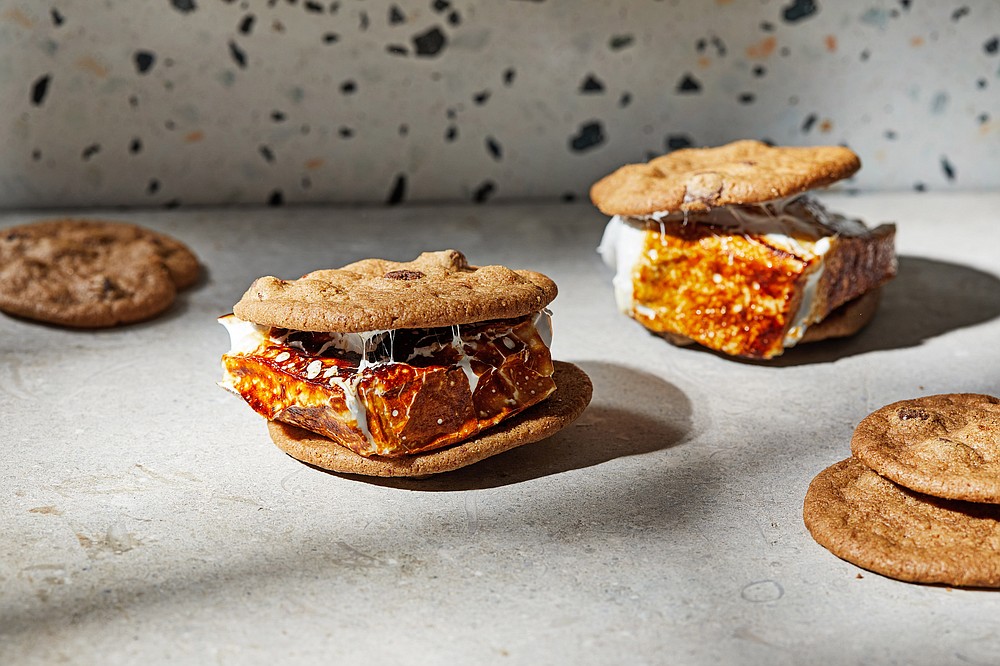 But it's just candy chemistry at work: Sugars and proteins are heated and whipped before they're cooled and cut. Modern marshmallows no longer contain sap from their namesake, Althaea officinalis, the marshmallow plant. Whether mass produced or homemade, they rely instead on gelatin for their structure, but there are dozens of ways to make a marshmallow. Some recipes use a combination of egg whites and gelatin, while some depend on agar agar for a vegan product. Granulated sugar is the default sweetener, but glucose, fructose, honey and corn syrup can also be added. The type of sugar and protein, along with the temperature to which the sugars are heated, are variables that alter the texture, melting point, bounciness and shelf stability of the final candy.

Regardless, once heated and whipped, the candy sets into a network of sweet, elastic air bubbles, perfect for floating in a mug of hot chocolate, melting in a microwave experiment or roasting over an open fire.

For this recipe, you'll need a stand mixer and an instant-read or candy thermometer. Powdered, unflavored gelatin is bloomed in water while a mixture of sugar and corn syrup is boiled until it reaches 238 degrees, or softball stage on a candy thermometer. The hot syrup is then carefully poured over the gelatin and then whipped until it's thick and bright white. A touch of salt and vanilla gives the candy some depth. Once set, it's cut into squares and tossed in confectioners' sugar.

You will need a 4- to 6-quart stand mixer to make this recipe, but the ingredient list is short and sweet. Homemade marshmallows are sticky little buddies, so be sure to coat them on all sides in confectioners' sugar before serving or storing. 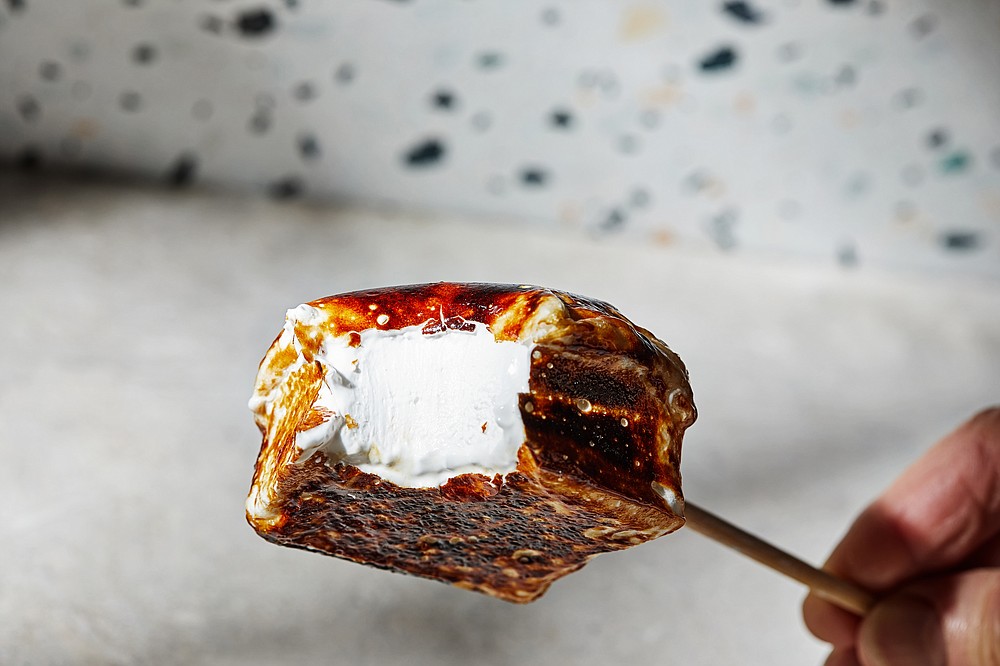 A toasted Vanilla Marshmallow (For The Washington Post/Tom McCorkle)

Grease a 9-by-13-inch pan with about 1 teaspoon vegetable oil. Cut a piece of parchment paper long enough to have a generous overhang on the two longer sides of the pan; fit it into the pan and brush with the remaining teaspoon of oil.

In the bowl of a stand mixer fitted with a whisk attachment, add ¾ cup water. Sprinkle the gelatin into the water and let stand until it dissolves, whisking briefly to ensure all the gelatin is moistened.

In a 4-quart saucepan with high sides, combine ½ cup water, the sugar and corn syrup. Using a rubber spatula, gently stir to ensure all the sugar is moistened. Use a wet pastry brush or wet cloth to wipe the sides of the pan so there are no sugar crystals clinging to it. Attach a candy thermometer to the side of the pan and bring the sugar mixture to a boil over high heat. Cook it, gently swirling the pan occasionally, until the mixture reaches 238 degrees, 6 to 8 minutes.

Turn the mixer to medium-low speed and slowly pour the sugar syrup in a steady stream into the gelatin, avoiding the whisk, aiming for the space between the bowl and the whisk. As soon as all of the sugar syrup is incorporated, gradually increase the speed to medium-high, taking care not to raise the speed too quickly, or some of the hot syrup may splash out. Continue beating until the mixture begins to turn white, about 4 minutes. Add the vanilla extract or paste and salt, and increase the speed to high. Whip until the fluff is glossy and quite thick, an additional 4 to 6 minutes.

Lightly grease a rubber spatula with oil and use it to transfer the marshmallow mixture to the greased pan, spreading it evenly but quickly, as it will start to set. Cover with a lightly greased sheet of parchment paper. Let the marshmallows cool completely, at least 3 hours and up to overnight, before cutting.