Newport lockup 7th in state to welcome canines for Paws in Prison program by Jeannie Roberts | June 2, 2021 at 7:02 a.m. 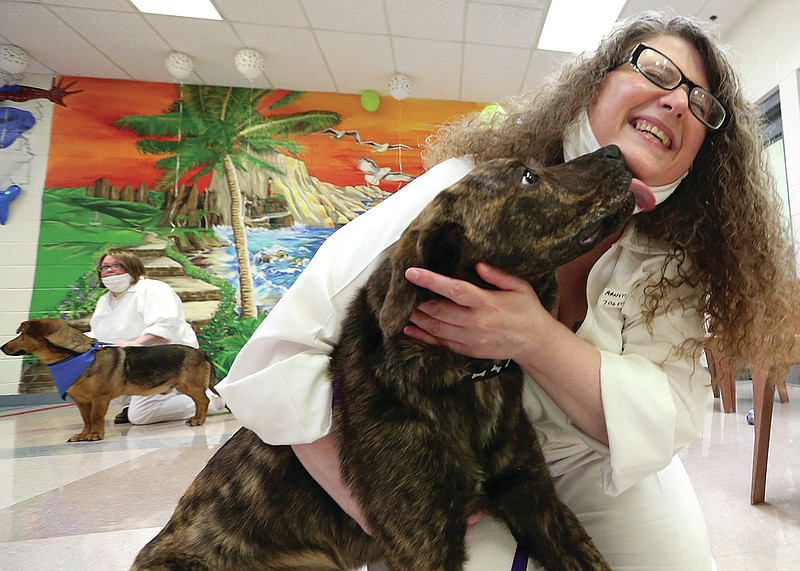 Hooch gives a kiss to his new trainer, McPherson Unit inmate Carolyn Arnett after they were matched up during the Paws in Prison kickoff "Paw-ty" on Tuesday, June 1, 2021, in Newport. Eight dogs were assigned to inmate trainers at the prison. More photos at www.arkansasonline.com/62pip/ (Arkansas Democrat-Gazette/Thomas Metthe)

NEWPORT -- The celebration at the Arkansas Department of Corrections' McPherson Unit in Newport on Tuesday afternoon could be heard long before attendees walked through a series of locking metal gates and down a long tiled corridor to an open door.

The room was crowded with about 50 people, business suits integrated with women in white prison uniforms. A series of eight dog kennels lined the front of the room next to the podium with dogs inside barking to get out. Dog-shaped balloons and dishes with dog treats were scattered around the room.

After about five years of planning, the women's prison unit became the seventh facility in the system to join the Paws in Prison program.

"You will pour your life and heart into this, and it will come back to you," Deputy Warden Billy Inman told the inmates during the celebration.

Paws in Prison -- founded in 2011 by philanthropist Renie Rule -- matches inmates with rescue dogs from shelters around the state, then professional dog trainers teach the inmates to train the dogs to prepare them for adoption after the canines graduate from the program.

The dogs live with their trainers 24 hours a day, seven days a week in the cells or barracks. The dogs must pass the American Kennel Club's Canine Good Citizen exam to graduate from the program.

Secretary of Corrections Solomon Graves told the inmates that he adopted a dog from the program in December as a Christmas gift for his son.

"I cannot thank you enough for what you're about to do," he said.

Prison spokeswoman Cindy Murphy said the inmates are carefully screened for acceptance into the program. Their records must be clear of any behavioral infractions for a year, and they must maintain good-behavior standing to remain as trainers.

Since its inception, more than 1,700 dogs have been trained and adopted into permanent homes.

Forty-three dogs are enrolled in six prison units: the J. Aaron Hawkins Sr. Center in Wrightsville, the Maximum Security Unit in Tucker, the North Central Unit in Calico Rock, the Ouachita River Correctional Unit in Malvern, the Randall L. Williams Unit in Pine Bluff and the Tucker Unit in Tucker.

Before the celebration began, inmate Kathy York, 58, sat on the tiled floor as a black-and-white dog with speckled legs named Peppa cowered in the corner beside her. York -- who is nearly 40 years into a life sentence for first-degree murder -- gently stroked the dog's back.

York knew that the eight dogs provided by the Humane Society of Independence County would be matched with inmate trainers at the end of the day's celebration. The two-person inmate team numbers would be pulled from a dog treat jar.

She put her arm protectively around Peppa.

"I think I've already found mine," York said. "I've never had a dog before in my whole life."

She sang softly to Peppa, who scooted closer to York.

In the end, Peppa was matched with York and her teammate Brenda Ivey, 52. Ivey has served 13 years of a 39-year sentence for first-degree murder.

Paws in Prison Foundation Board chairwoman Mary Parker spoke to the inmates sitting in chairs along the east wall of the room, encouraging them to pour their all into their dogs, despite the inevitable pain of letting them go when the dogs graduate and are adopted.

"Will you cry when they leave? You most certainly will," Parker said, but she encouraged the inmates to help anyway.

She nodded to the back corner where York was still sitting on the floor with Peppa.

"Like the dog in the corner, you will give them a chance like never before," Parker said.

The program is funded by the sale of recyclables through the Division of Correction and by donations administered by the Arkansas Paws in Prison Foundation nonprofit, as well as funds from other foundations, businesses and private individuals.

Inmate Cassandra Johnson said excitement was high for weeks before the dogs arrived at the prison.

"I would say 90% of us were in that 'Yippee!' mood," Johnson said. "I will not take this lightly. I'm going to put everything I have inside of me into this. These dogs will feel loved. With rescue dogs, you just don't know what they've been through. I'm so grateful for this."

Johnson has served 16 years of a life-without-parole sentence for capital murder and a 20-year aggravated robbery sentence.

"She's a dog lover too, and these dogs need love just like we do," she said. "Our dog just may end up being my therapist."