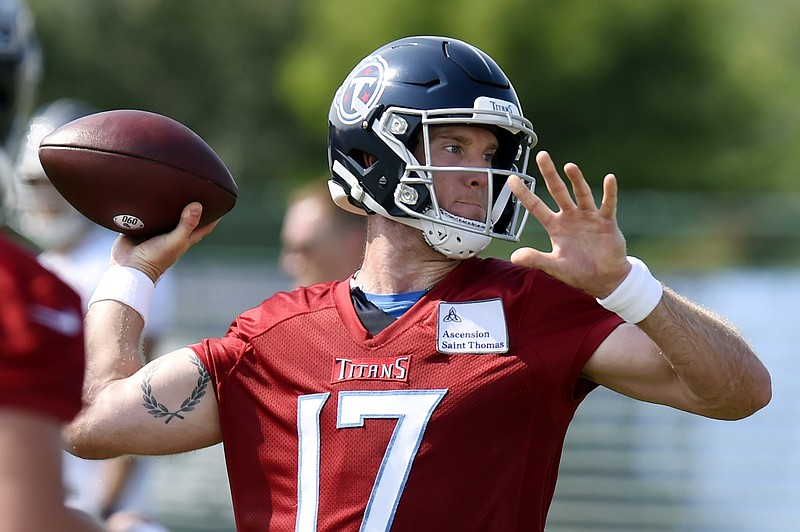 Tennessee Titans quarterback Ryan Tannehill said he would not have gotten the covid-19 vaccine had it not been for the NFL’s mandates. “Everyone has to make the best decision for them and their families,” he said. “That is kind of our mindset in this building, but they are trying to force your hand.” (AP/Mark Zaleski)

The NFL's most discussed stat has been covid-19 vaccination percentages.

As the first week of training camp kicked off, numbers continue to increase while debate persists.

The league can't mandate the vaccine, but it made its stance clear through strict protocols for players who don't get it.

"I wouldn't have got the vaccine without the protocols they are enforcing on us," Tennessee Titans quarterback Ryan Tannehill said this week. "It's a personal decision for everyone. Everyone has to make the best decision for them and their families. That is kind of our mindset in this building, but they are trying to force your hand.

"I love this game, I love this team, I want to be able to compete and do the things that are important to build chemistry and win football games. Ultimately, that forced my hand into getting the vaccine."

Some players are willing to endure daily testing, wearing masks, physical distancing and more restrictions to avoid the vaccine. They won't be allowed to eat meals with teammates; can't participate in media or marketing activities while traveling; aren't permitted to use the sauna or steam room; and may not leave the team hotel or interact with people outside the team on the road.

Buffalo Bills wide receiver Cole Beasley has strongly argued against the vaccine, even engaging in public debate with teammates about it on social media.

"I'm not anti- or pro-vax. I'm pro choice," Beasley said. "With that being said, the issue at hand is information being withheld from players in order for a player to be swayed in a direction he may not be comfortable with. When dealing with a player's health and safety, there should be complete transparency regarding information that is vital in the decision-making process."

Teams that experience a covid-19 outbreak among unvaccinated players could forfeit regular-season games, with players on both teams not getting paid. Similar rules applied last year when the league played all of its games and completed its season on schedule, with little to no talk of forfeits.

The Indianapolis Colts and Washington were the last two teams to surpass 50% vaccination rates. The Colts opened camp without Coach Frank Reich, who tested positive for covid-19 despite being vaccinated.

"I don't want this to turn out to be a negative in terms of people running away from getting vaccinated because it's still critical, and I think with Frank testing positive and getting covid, and having no symptoms, it shows it works," Colts General Manager Chris Ballard said. "I mean, that's one of the positives. We don't know the variant yet. We are waiting on results on the variant. That will be interesting to see.

"But it shows it works and it's a shame in our country right now that we've politicized something that is good and that is going to help the entire country. But it's where we're at, and we just have to continue to push forward with this."

The reluctance from Washington players to get vaccinated has disappointed and angered Coach Ron Rivera -- who is immune deficient after undergoing cancer treatment last year -- to the point he wears a mask even though he has long been fully inoculated against the virus.

"I'm truly frustrated. I'm beyond frustrated," he said at his camp-opening news conference this week. "It is everybody's choice, everybody's decision, but you just hope that they all fall in line and understand what's at stake and know we're not there yet."

Under the league's protocols, vaccinated players must be tested every 14 days as opposed to daily. That has some feeling uneasy.

"Personally, I think the [testing] once every 14 days is not enough," Seattle Seahawks Coach Pete Carroll said before referencing rising positive test numbers in the nation. "We have to look after our guys. That would have been fine two weeks ago, but things have shifted, and we have to respond." 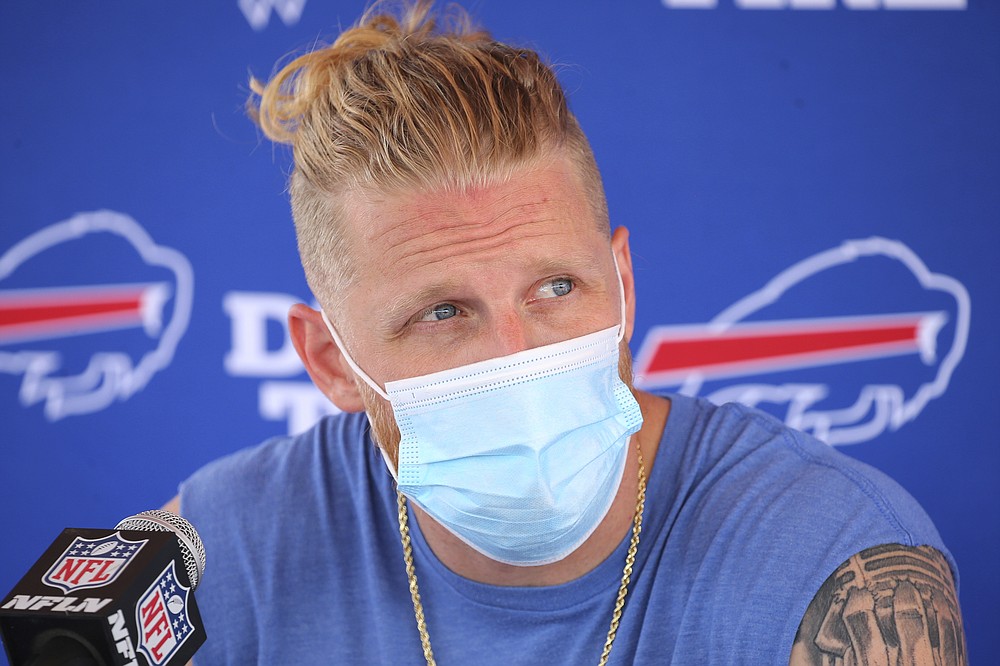 FILE - Buffalo Bills receiver Cole Beasley addresses the media following practice at NFL football training camp in Orchard Park, N.Y., in this Wednesday, July 28, 2021, file photo. The NFL can’t mandate the vaccine but it made its stance clear through strict protocols for players who don’t get it. Cole Beasley has strongly argued against the vaccine, even engaging in public debate with teammates about it on Twitter. “I’m not anti- or pro-vax. I’m pro choice,” Beasley said. (AP Photo/Jeffrey T. Barnes, File)