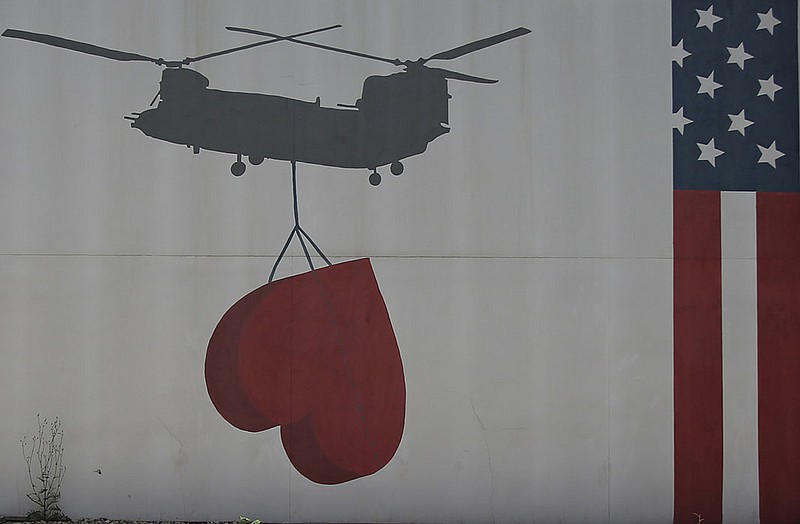 A painting projects a hopeful image on the wall Friday at the U.S. Embassy in Kabul, Afghanistan. An initial group of about 2,500 Afghans who provided aid to U.S. forces is being evacuated under threat of reprisals by Taliban militants. (AP/Mariam Zuhaib)

WASHINGTON -- The first group of Afghans promised refuge by the Biden administration for helping the U.S. during the 20-year war in Afghanistan landed on American soil early Friday, starting a new chapter after years of waiting.

A chartered airliner carrying Afghan interpreters, drivers and others who worked with the U.S. military, as well as their family members, arrived at Dulles International Airport outside Washington after traveling more than 30 hours from Kabul, the Afghan capital, officials said.

The first evacuation flight carried 221 Afghans under the special visa program, including 57 children and 15 infants, according to an internal U.S. government document obtained by The Associated Press.

The evacuees escaped the clutches of Taliban militants who have targeted interpreters, in some cases killing them as retribution for their work with U.S. troops on the front lines and as crucial guides for diplomats and aid workers.

From Dulles, they were bused to Fort Lee, Va., south of Richmond, where they will stay at a hotel on the base for about a week to complete their processing before being resettled in the U.S. permanently, officials said.

[Video not showing up above? Click here to watch » https://www.youtube.com/watch?v=KGIPRu9xvwQ]

Friday's flight was "an important milestone as we continue to fulfill our promise to the thousands of Afghan nationals who served shoulder-to-shoulder with American troops and diplomats over the last 20 years in Afghanistan," President Joe Biden said. He said he wanted to honor the military veterans, diplomats and others in the U.S. who have advocated for the Afghans.

"Most of all," Biden said in a statement, "I want to thank these brave Afghans for standing with the United States, and today, I am proud to say to them: 'Welcome home.'"

The arrival marked the vanguard of an initial group of about 2,500 Afghans being evacuated under threat of Taliban reprisals in an effort the White House calls Operation Allies Refuge. Groups of Afghans will arrive by plane roughly every three days and be transported to Fort Lee, said one U.S. official briefed on the arrangements.

The newly arrived Afghan people will join 70,000 others who have resettled in the U.S. since 2008 under the special visa program.

At the sprawling Army base about 130 miles south of Washington, the Afghans will stay on dedicated floors of the hotel, where private security agents rather than military police will be in place to ensure their safety, officials said.

An additional 4,000 Afghans who worked with U.S. forces but whose applications need further approvals will go to other countries with their families in the coming weeks to complete the visa process before coming to the U.S., officials said.

The U.S. is negotiating with Qatar and Kuwait to house thousands of Afghans at military bases in those countries for up to several months while they complete their visa applications and await clearance to come to the United States.

But U.S. officials, speaking on the condition of anonymity to discuss negotiations, said Friday that no deal had been closed with those two countries. Diplomats are discussing similar arrangements with Kazakhstan and Kosovo, one official said.

Concerns about housing Afghans who have not completed their security screenings and uncertainty on the American side about finding funding for the relocation effort have remained obstacles, the U.S. officials said.

Many of the newly arrived interpreters have long been targets of the Taliban for their cooperation with U.S. troops during the war. Their passage was promised under two congressionally devised special visa programs, but the documentation and security requirements have bedeviled many applicants.

About 20,000 Afghans had applied for the special immigrant visa as of July 15, according to the White House. That number does not include family members; a U.S. government official said the total number of people in the applicant pipeline including family members could be as high as 100,000.

Many more are still trapped as Taliban fighters tighten their grip around rural areas. The administration has been opaque about who precisely will receive passage, and many fear that they will never be found.

The Association of Wartime Allies, an interpreter advocacy group, estimates about half of applicants still waiting live outside Kabul. Many roads outside the capital are dotted with Taliban checkpoints. The Afghan air force, beleaguered and overtaxed in battles with the militants, does not seem capable of ferrying applicants, said Matt Zeller, a former Army officer and board chairman of the group.

"The reality is some of these people are going to die. Why didn't the U.S. military evacuate them when we had the ability?" asked Zeller, who said Biden administration officials ignored his warnings in January to prepare for mass evacuations.

Tracey Jacobson, the State Department's Afghanistan Coordination Task Force director, told reporters on the call Thursday that the United States had no ability to get applicants to the capital or house them while they wait for clearance to fly.

Thursday, Congress agreed to expand the number of special visas available for Afghans to 19,000 from 11,000 and broaden the number of people eligible for them by removing some application requirements. The measure, part of a $2.1 billion emergency spending bill, also includes hundreds of millions of dollars for government programs that aid and resettle refugees and migrants.

Biden and other top administration officials say they are committed to assisting Afghans who braved dangers and hardships to aid the U.S. during its longest war.

"We have spoken many times about the moral obligation we have to help those who have helped us," Defense Secretary Lloyd Austin said in a statement last week.

But a refugee agency said the Biden administration appeared to be still scrambling to work out the resettlement of thousands more of the Afghans, and it urged Biden to bring them quickly to the U.S. or a U.S. territory, such as Guam.

"To date, there is simply no clear plan as to how the vast majority of our allies will be brought to safety," Krish O'Mara Vignarajah, president of the Lutheran Immigration and Refugee Service resettlement agency, said of the Afghan interpreters.

"We cannot in good conscience put them at risk in third countries with unreliable human-rights records, or where the Taliban may be able to reach them," the resettlement official said.

Military veterans, some members of Congress and refugee groups have pushed to speed up the evacuations. But concerns that a processing error could result in a security problem have kept that pressure in check, said several people who talked to administration officials in recent weeks.

"Realistically, one cannot bring 20,000 interpreters directly into the United States," said Mary Kaszynski, director of government relations for VoteVets, a veterans organization that has focused on the issue for years because many members remain close with the interpreters they worked with in Afghanistan. "That wouldn't be safe, that wouldn't be good for U.S. interests and that is why they had to implement a staged approach."

Ross Wilson, the charge d'affaires at the U.S. Embassy in Kabul, heralded the success of the first flight but acknowledged the difficulties that lie ahead for the thousands more awaiting refuge as the security situation across Afghanistan deteriorates.

"Much work remains ahead to meet America's commitment to those who have been committed to us," Wilson said Friday at a news conference held at the embassy.

Stuck in limbo are thousands of others seeking a visa who were found not to qualify for the special immigrant visa program, often for minor reasons. Many of these applicants have appealed or reapplied countless times and are afraid they will be abandoned as the U.S. leaves.

Currently there is no official effort to help those in that applicant pool, along with those who are unable to get to Kabul to undergo the visa process because of recent Taliban advances.

Information for this article was contributed by Eric Schmitt and Jennifer Steinhauer of The New York Times; by Ellen Knickmeyer, Matthew Lee and Lolita C. Baldor of The Associated Press and by Alex Horton, Anne Geran and Seung Min Kim of The Washington Post. 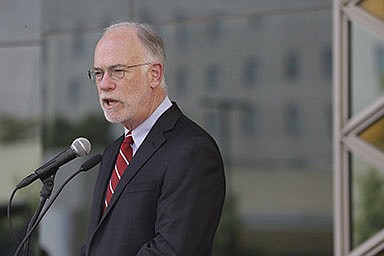 U.S. Ambassador Ross Wilson, the charge d’affaires at the American Embassy in Kabul, said Friday that many difficulties lie ahead for the thousands of Afghans awaiting transfer to the United State. (AP/Mariam Zuhaib)