Hog to Warrior: Golden State takes Moody at No. 14 in NBA Draft 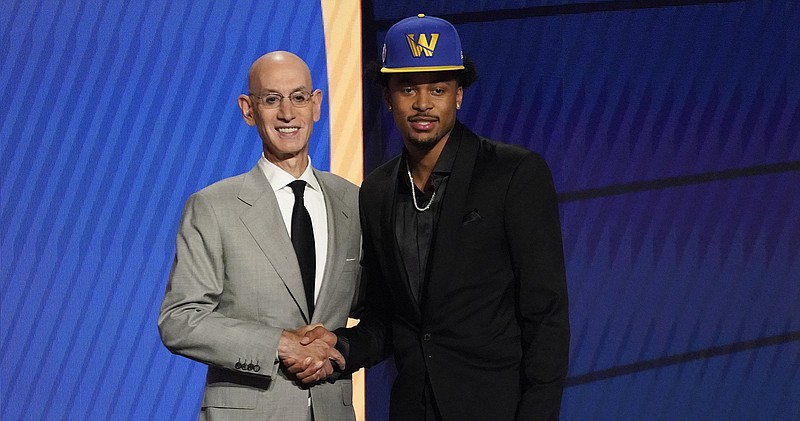 Former Arkansas guard Moses Moody (right) is congratulated by NBA Commissioner Adam Silver at the NBA Draft on Thursday night. Moody, a Little Rock native who declared for the draft after his freshman season with the Razorbacks, was taken by the Golden State Warriors with the 14th overall pick. (AP/Corey Sipkin)

FAYETTEVILLE -- After Moses Moody worked out for the Golden State Warriors on July 15, he was excited about the possibility of being drafted by them.

"I would love to play for the Warriors, honestly, especially being a rookie," said Moody, a 6-6 guard from Little Rock. "It's just somewhere I could really develop. They develop their guys really well, and it's almost like a head start just because you're in this system that works.

"You're learning how to play basketball at the highest level and the best way. I feel like that puts you at an advantage just being in this environment and this community."

Moody, who had a second workout for Golden State on Sunday, will be headed back the Bay Area to begin his professional career.

The Warriors selected Moody, a first-team All-SEC player as a freshman for the University of Arkansas last season, with the No. 14 overall pick in the first round of Thursday night's NBA Draft.

Moody is the Razorbacks' 40th draft pick, 13th in the first round and first in the lottery since Ronnie Brewer -- Arkansas' new recruiting director -- went 14th to the Utah Jazz in 2006.

Arkansas' most recent first-round pick had been Bobby Portis in 2015, who went 22nd to the Chicago Bulls.

"It's no coincidence that the organization that we talked to the most [about Moody] was Golden State from the very beginning once he entered his name into the draft," Musselman said. "I think he's going to [a] great, great spot. He's going to be able to play on a winning team, playing for a great coach [Steve Kerr] and playing for an incredible front office as well."

Moody was rated the No. 37 high school player by 247Sports, No. 41 by ESPN and No. 53 by Rivals, but played his way into being a lottery pick by averaging 16.8 points, 5.8 rebounds and 1.6 assists for an Arkansas team which reached the Elite Eight of the NCAA Tournament for the first time since 1996 before losing to eventual national champion Baylor.

"Moses made an incredible jump from where he was rated at the end of his high school [career], and he did that through incredible hard work," Musselman said. "I think it's a great statement for everybody -- from a national standpoint, from an in-state standpoint."

Moody is Arkansas' first one-and-done NBA player to be drafted after his freshman season.

Previously, sophomores Joe Johnson (the 10th pick by Boston in 2001), Daniel Gafford (the 38th pick by Chicago in 2019) and Isaiah Joe (the 49th pick Philadelphia in 2020) had been Razorbacks who left the program the earliest.

"Probably when all of my NBA friends that I have still in the league started calling and asking questions [about Moody]," Musselman said of when he knew early in the SEC schedule that Moody likely would be a first-round pick after the season. "I think as the phone started ringing with NBA people asking about his character and work ethic and they were people that I had relationships with.

"I told the staff, 'I think this guy is going to be gone in another 15 games.' ... All of us knew he was going to be heavily pursued by the NBA."

Arkansas' players watched the draft at Musselman's house with the coaching staff. The players wore T-shirts with "Pro Hogs" on the front and "Who's Next?" on the back in reference to the draft.

"I feel it's amazing that he's a pro now," Arkansas sophomore guard Davonte "Devo" Davis said of Moody. "That was his goal, and now he got there. So I'm happy for him.

"Of course, that's everyone's goal, is to get to the NBA. To get the next step. You never know who's next. Everyone for sure is putting in the work, I can tell you that."

Moody attended the draft, held at the Barclays Center in Brooklyn, with his family.

"Really excited for Moses and his family and all of his teammates, too," Musselman said. They got to celebrate and see all of his hard work.

"He was such a good teammate for us. To think that a freshman would lead us in scoring and be one of our most unselfish players and to watch his growth throughout the year that he was with us, I think every Razorback fan should be proud of Moses.

Musselman said Moody will benefit from playing in Golden State with guards such as Stephen Curry and Klay Thompson.

"He's going to an incredible organization, playing with some incredible vets -- Steph Curry and Klay Thompson, those guys are the truest professionals," Musselman said. "I really believe he fits in really well with their style of play because he can move without the ball."

Moody was asked after his first workout with Golden State about how his style of play might mess with the Warriors.

"I feel like it fits perfect," Moody said. "I like to run the floor, space the floor and knock down shots. And when guys have lots of shooters on the floor you've got to decide where you want to put attention, and if you don't pick me then I get open shots and get a lot of good looks.

"It also creates a lot of driving lanes and just makes the game a lot easier in a system like this."

Musselman said Moody's game will translate well to the NBA.

"Immediately when he steps into their locker room, the veterans are going to respect him because of how he works and his approach to the game," Musselman said. "How he watches film, the way he pre-practice shoots."

"He's now entered a business world, and he's well mature beyond his age, and we saw it on a daily basis and now Golden State is going to see it," Musselman said. "He's a guy that understands offensive spacing. Golden State, the way they play, their philosophical Xs and Os is about spacing, sharing the ball, passing up a good shot for a great shot, and that's what's in Moses' DNA.

Before the Warriors drafted Moody, they picked Jonathan Kuminga, a forward who played in the G League last season.

Moses Moody became the 13th Arkansas player to be picked in the first round of the NBA Draft. Here is rundown: 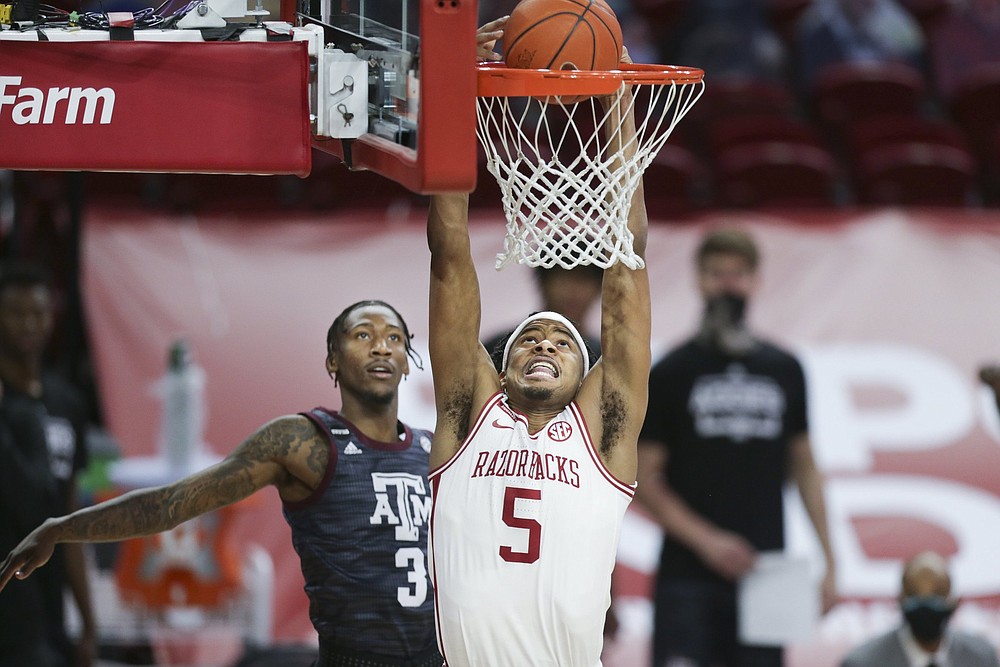 Former Arkansas guard Moses Moody, who was taken by the Golden State Warriors with the 14th overall pick, led the Razorbacks in scoring last season with an average of 16.8 points — third in the SEC and fourth best among NCAA freshmen. (NWA Democrat-Gazette/Charlie Kaijo)