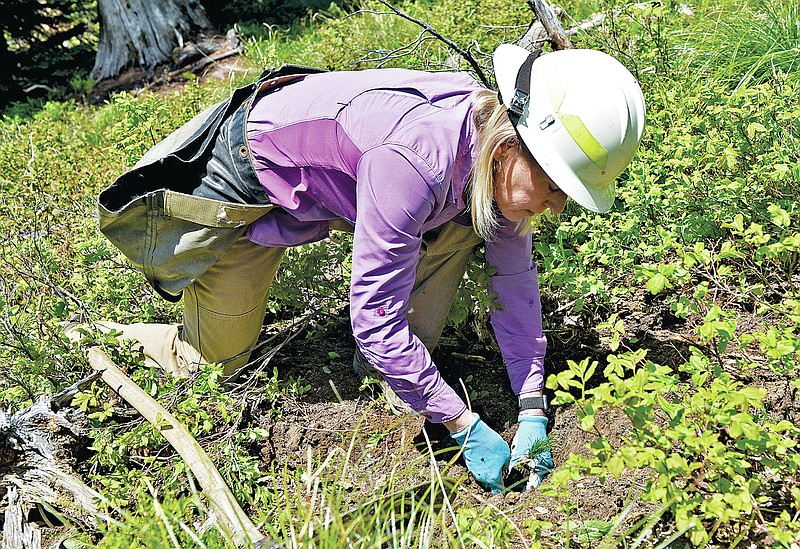 Former Flathead National Forest silviculturist Melissa Jenkins demonstrates the proper way to plant a whitebark pine seedling to ensure its best chance of survival at Whitefish Mountain Resort June 24, 2021, in Whitefish, Mont. Seeds for the pine trees were gathered at the resort in 2014, frozen at a seed bank for some years before being grown at a U.S. Forest Service nursery in Coeur d'Alene, Idaho. The seedlings that are being planted are 3 years old. (Whitney England/Whitefish Pilot via AP)

WHITEFISH, Mont. -- Tiny whitebark pine trees just a few inches tall peaked out from behind old stumps and logs along a mountainside just outside of Whitefish Mountain Resort's boundary near the Hellroaring Basin.

Dedicated workers from the Flathead National Forest, with support from the resort, spent the better part of a recent day carefully planting 400 seedlings in prime microsites along the prepared forestland. The placement of each seedling is vital to its chance of survival -- and the survival of the whitebark pine species is critical for high-elevation mountain locations and the wildlife that resides there, according to the forest's recently retired silviculturist Melissa Jenkins.

"Whitebark pine is called a foundation or a keystone species at high elevations, and that is because its presence allows other species to exist and high-elevation ecosystems to function like they did historically," Jenkins told the Whitefish Pilot.

Restoration efforts for the threatened whitebark pine trees in the Flathead National Forest have been underway for more than 20 years, and the resort has been a key ally in those efforts. In 2016, the resort was honored as the first Whitebark Pine Friendly Ski Area by the nonprofit Whitebark Pine Ecosystem Foundation and it has kept that certification active. The recent tree-planting event at the resort was part of the recertification process.

Flathead National Forest culturist Karl Anderson, who helped organize the tree-planting event, was one of the first people climbing trees on the front side of Big Mountain to collect whitebark seeds in the late 1990s, he said. He has personally seen and helped along the efforts to save the species. To witness it all come together by planting seedlings back at the resort was a treat for the culturist who's spent 32 years with the U.S. Forest Service.

"It's a pretty cool story working with the resort and getting to this point," Anderson said. "The seed that was collected here in 2014 is going right back to here. ... This area has a unique standing in our whitebark pine world in that it has genetic diversity represented here much more so than other places."

Because the forest's geneticist has deemed the whitebark pine seeds collected at the resort genetically diverse, those same seeds can be planted in the resort with a good chance of survival. The seeds collected from areas of the resort such as the Ptarmigan Bowl and Good Medicine in 2014 were frozen in a seed bank for some years and then taken to the forest's nursery in Coeur d'Alene, Idaho, where they grew in containers in a greenhouse for three years. Now the 3-year-old seedlings are finally able to be planted back into the forest.

"Since the beginning, the resort has been amazing ... really solid working with Whitefish Mountain Resort," Anderson said. "It's just a fantastic organization and fully supportive of what we're trying to do."

Whitebark pines are threatened and continually being wiped out by several fluctuating factors such as climate change, pine beetles and altering fire regimens. But the biggest threat to the species is a fungus called blister rust.

Blister rust infects a branch of a tree, which kills the branch within a couple years and turns all of its needles red. The fungus spreads and eventually kills the entire tree, leaving dead trees standing like ghosts of their former selves.

She added it's an introduced pathogen that the whitebark did not evolve with. Some trees have shown to be resistant to the fungus, and those are the trees forest workers try to collect seeds from because of their proven resilience.

Jenkins says it could be possible that the tree species would survive on its own without restoration efforts, but also believes it's a problem humans should be obligated to fix.

"Could whitebark pine survive and overcome the rust without human intervention? Maybe. We don't know for sure, but it would take thousands of years so that's why it's so critical," she said. "Humans caused this problem. Humans introduced blister rust to these ecosystems, and I feel that humans have a responsibility to help restore the species."

The Flathead National Forest follows its own management plan to support the restoration of the trees. Jenkins said the plan focuses on establishing populations that have genetic diversity to sustain themselves for the long term and disperse those populations across the entire forest.

The Forest Service averages planting whitebark pine seedlings over 50 to 125 acres per year. There are currently 14 sites across the forest where whitebark seeds are harvested, including the resort, according to Anderson and Jenkins.

Whitebark pines are a bit of an anomaly in the tree world. The species usually marks the tree line on otherwise barren, high-elevation mountain slopes. Whitebark pines grow in sterile soil, often the first to repopulate recent wildfire burns, and their upward growth shades the snow which manages spring runoff. The trees are also "nurse" trees which help other tree species and plant life grow.

While all of those unique traits are important, potentially one of the key offerings they bring to high-mountain ecosystems is the high-protein, fatty seed that provides nutrition to wildlife such as birds, squirrels and even grizzly bears.

"To have that kind of a food source at high elevations is really unique, so a lot of mammals dig up squirrel middens and eat the seeds," Jenkins said.

Also a unique trait of the whitebark pine is that its sole vector of seed dispersion is done by one bird -- the Clark's nutcracker. The seed from a whitebark is wingless and the cones do not open on their own; the only way the seeds are planted is by the bird that can store up to 150 seeds in a special pouch under its tongue to bury in caches. The bird caches up to 100,000 seeds in a cone-crop year, but will only use a quarter of that, leaving the rest for other wildlife to feed on, or to be left in the ground for the trees to repopulate.

"This mutualistic relationship that the bird depends on the tree, and the tree has actually evolved this candelabra type crown so that the cones are displayed for the bird to see, then the bird being the sole vector seed dispersal -- just that story of that interconnection is a really good lesson for people," Jenkins said, referencing the importance of understanding ecosystems and how humans are a part of those systems.

Currently, healthy whitebark pines on the front side of Big Mountain are displaying their unique dark purple cones, indicating a productive "cone year." The species only produces cones about every three years.

Representatives from the Forest Service and Whitefish Mountain Resort say their collaborative efforts are paying off. 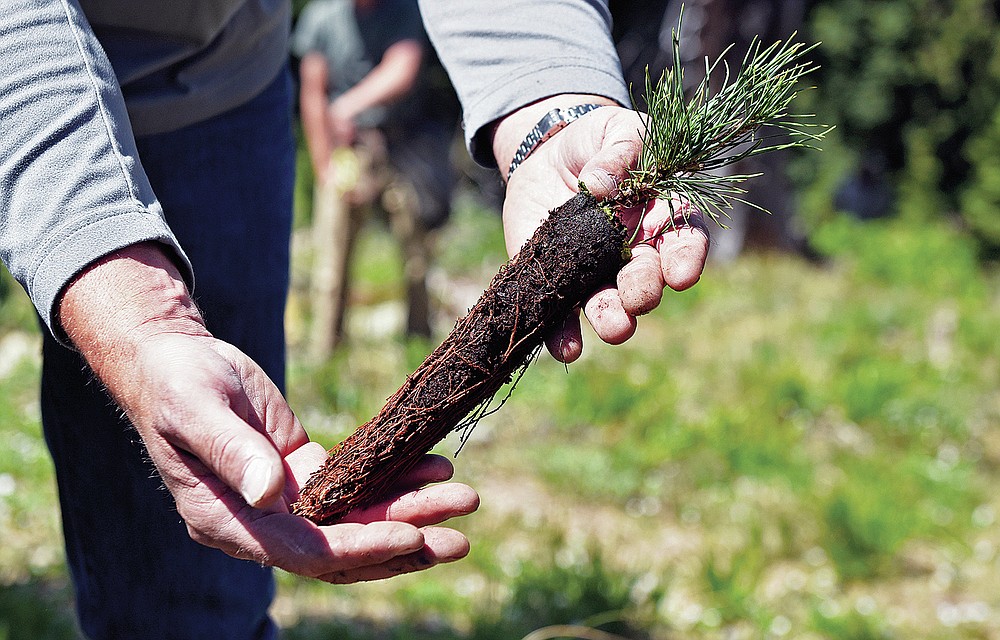 Flathead National Forest culturist Karl Anderson holds a whitebark pine seedling on June 24, 2021, prior to planting it on a mountainside at Whitefish Mountain Resort in Whitefish, Mont. Whitebark pine are critical for high-elevation mountain locations and the wildlife that live there. Whitebark pine have been threatened by climate change, pine beetles and a fungus called blister rust. (Whitney England/Whitefish Pilot via AP) 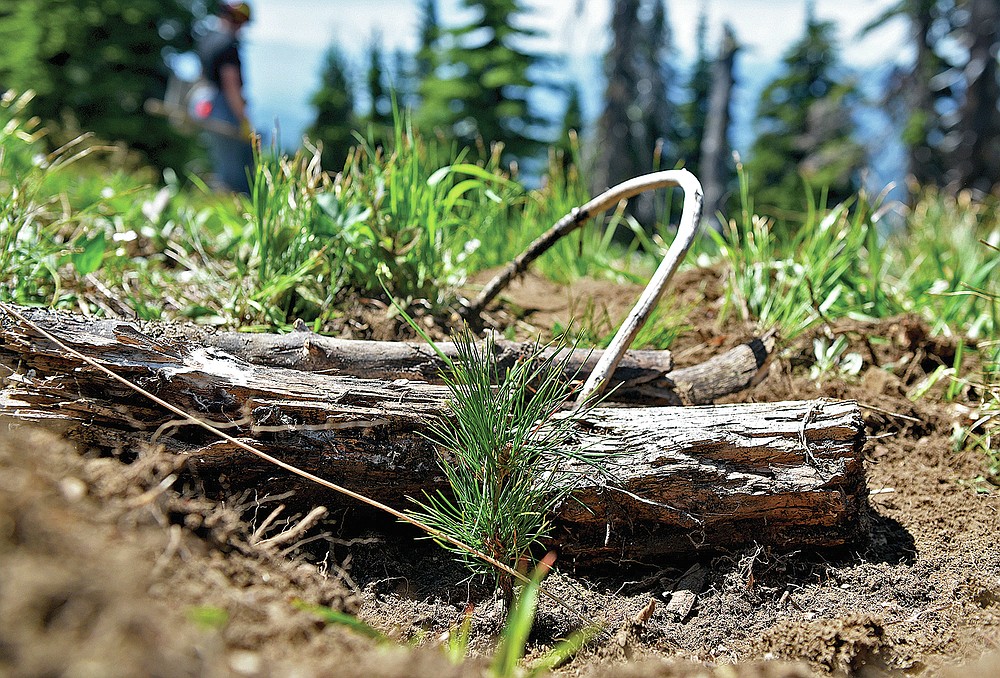 A tiny whitebark pine seedling is planted on June 24, 2021, in a carefully chosen microsite that will protect the tree in its younger years as it grows on a mountainside at Whitefish Mountain Resort in Whitefish, Mont. Restoration efforts for the threatened whitebark pine trees in the Flathead National Forest have been underway for more than 20 years. (Whitney England/Whitefish Pilot via AP)