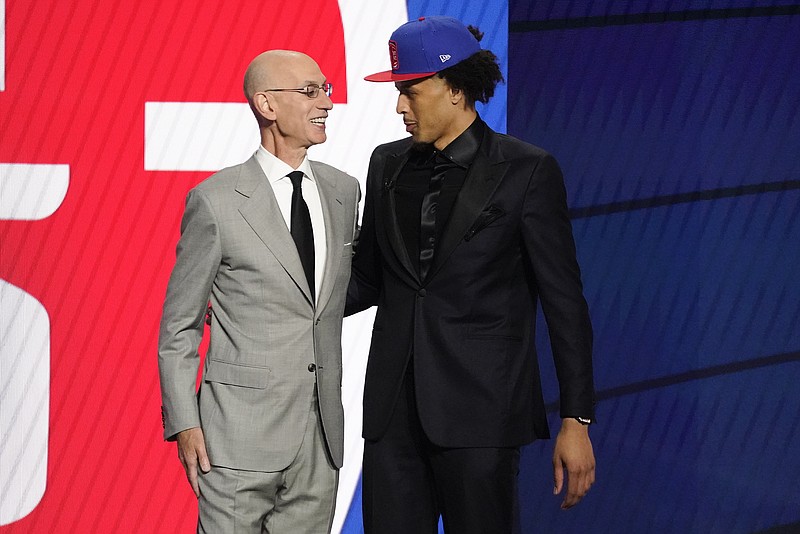 NBA Commissioner Adam Silver greets Cade Cunningham who was picked as the number one overall pick by the Detroit Pistons during the NBA basketball draft, Thursday, July 29, 2021, in New York. (AP Photo/Corey Sipkin)

Cade Cunningham sure looked like the No. 1 overall draft pick all year at Oklahoma State with his fluid game, scoring ability and passing -- all in a 6-foot-8 frame.

So it was no surprise the Detroit Pistons would grab the freshman All-American with the top pick as they did to open the draft Thursday night in New York. And it was the start of multiple teams spending high picks on playmakers with size, including Florida State forward Scottie Barnes and Australian teenager Josh Giddey climbing a bit higher than expected as top-six picks.

It comes at a time when the game has evolved to a more position-free flow, making players like Cunningham, Barnes and Giddey more valuable than ever with their ability to roam all over the court.

Cunningham had been widely expected to be the first name called in New York, though Pistons General Manager Troy Weaver wouldn't reveal plans earlier this week and said the team would look at every scenario, including trades. In the end, Detroit stuck with the 19-year-old mentioned as a potential top pick before ever stepping foot on the Oklahoma State campus.

The point guard from Arlington, Texas, lived up to expectations to become a first-team Associated Press All-American. He averaged 20.1 points, 6.2 rebounds and 3.5 assists with a game that allowed him to hit from three-point range, score off the dribble or find teammates out of traps.

Barnes had risen mock drafts in recent weeks but offered the first surprise of the night by going to Toronto with the No. 4 pick ahead of Gonzaga freshman point guard Jalen Suggs. Barnes is a long-armed 6-8 forward who ran the Seminoles' offense and has the capability to be an elite defender with his length and ability to chase smaller ball handlers on the perimeter.

That's why Barnes said he felt he could "fit right in doing different things" with the Raptors.

"A lot of what we like is his versatility," Toronto Coach Nick Nurse said. "He'll rebound it, he can guard, he can switch and guard multiple positions and he's big enough to guard bigs down inside. He's big enough to rebound with bigs. And we like to get out and go with the guys who are grabbing the rebound a lot."

Two picks later, Oklahoma City grabbed Giddey, who was considered a potential lottery pick as a 6-8 floor leader known for his passing touch. He had played in Australia's National Basketball League with an all-around game (10.7 points, 7.1 rebounds and 7.2 assists) and has been part of the NBA Academy program designed to develop elite international prospects.

"It was really something I wanted to be a part of and kind of start from the bottom and move our way up in the league," Giddey said about the Thunder's rebuilding efforts. "It's a great young team and I can't wait to get down there and get started."

It started with Cunningham, who attended the draft wearing a dark suit, shirt and tie with sparkles on his collars and cuffs. When the pick was announced, Cunningham kissed 2-year-old daughter Riley, sitting on his lap, then hugged family members and took the stage alongside NBA Commissioner Adam Silver to don a blue Pistons hat.

Houston followed at No. 2 by grabbing preps-to-pros teenager Jalen Green, who bypassed college basketball to play in the G League. The 6-foot-6 Green averaged 17.9 points on 46% shooting 15 games, showing off high-flying dunks, a willingness to attack the rim and a promising shooting touch.

Next up was Southern California freshman big man Evan Mobley, who went to Cleveland at No. 3. The 7-footer has potential as a mobile big man with length and the versatility to switch on switches. Suggs and G League forward Jonathan Kuminga were the other players considered to be in the draft's top tier, with Suggs going fifth to Orlando and Kuminga seventh to Golden State.

There also was a tribute to Kentucky freshman guard Terrence Clarke, who was killed in an April car accident after declaring for the draft. Silver announced Clarke as an honorary draft pick at the end of the lottery selections, bringing Clarke's mother, sister and brother to the stage. 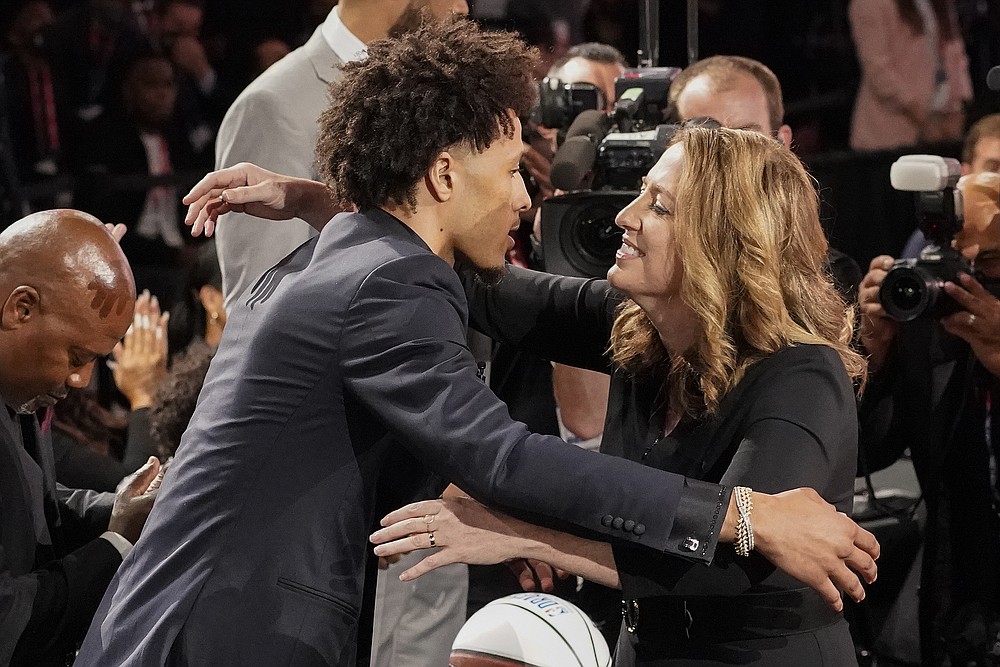 Cade Cunningham, left, hugs family and friends after being selected as the number one draft pick overall by the Detroit Pistons during the NBA basketball draft, Thursday, July 29, 2021, in New York. (AP Photo/Corey Sipkin) 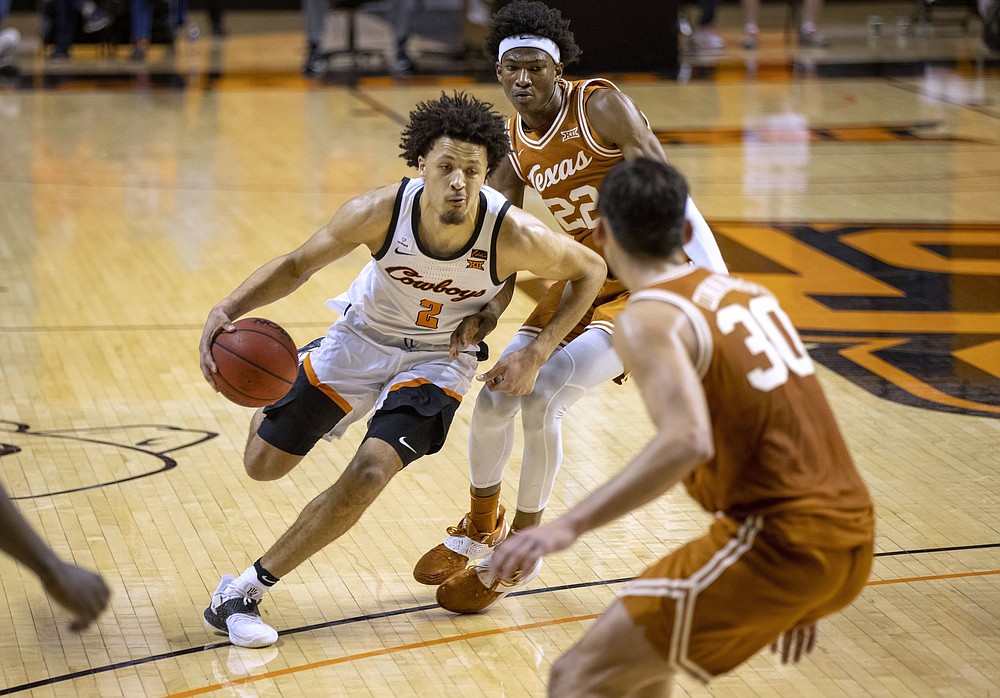 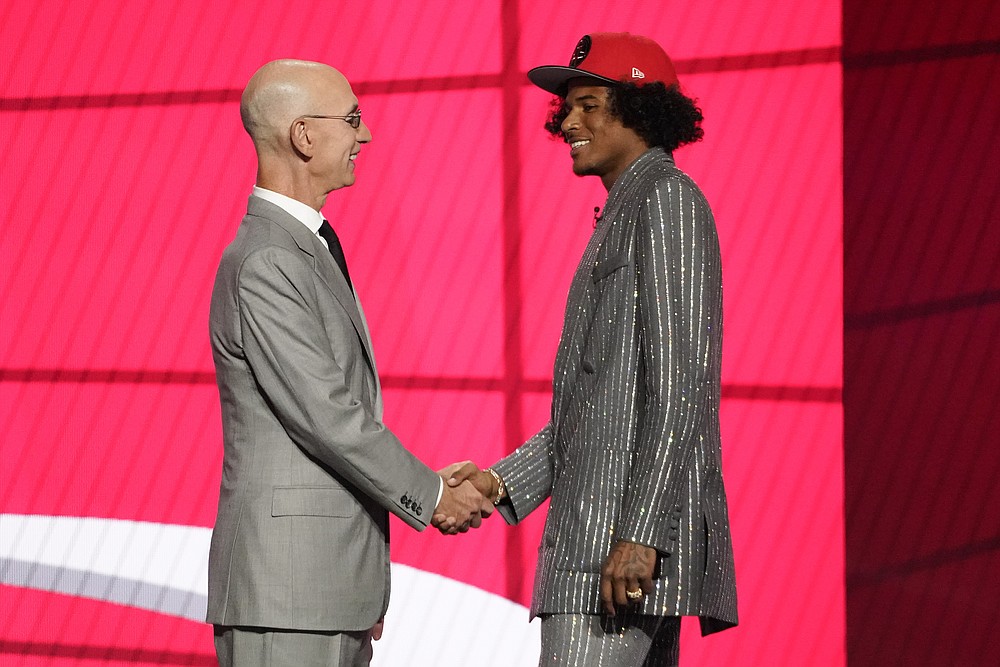 NBA Commissioner Adam Silver greets Jalen Green after he was selected by the Houston Rockets as the second pick during the first round of the NBA basketball draft, Thursday, July 29, 2021, in New York. (AP Photo/Corey Sipkin) 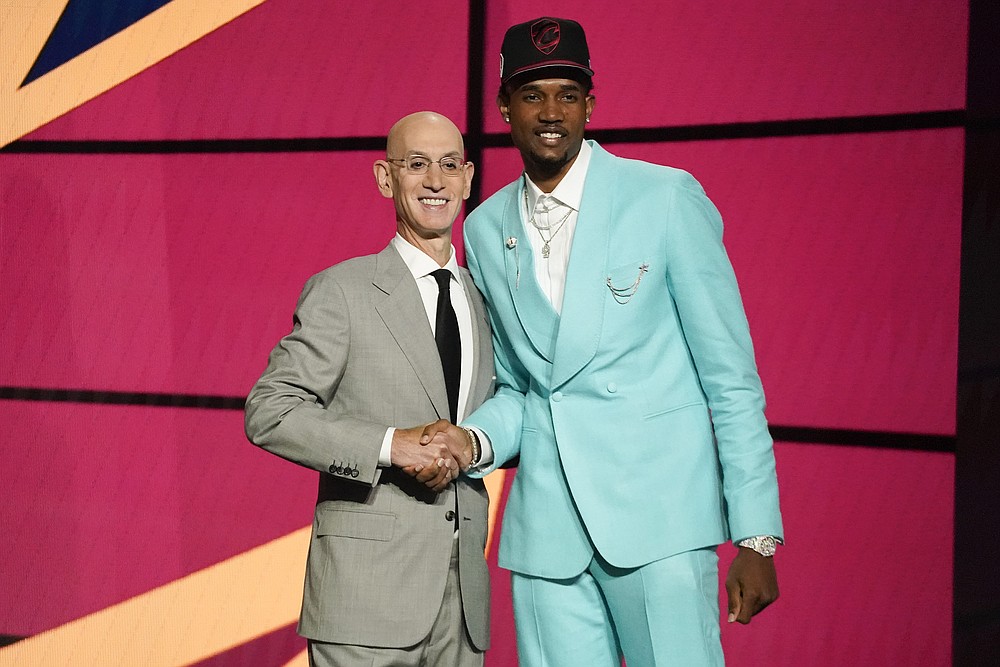 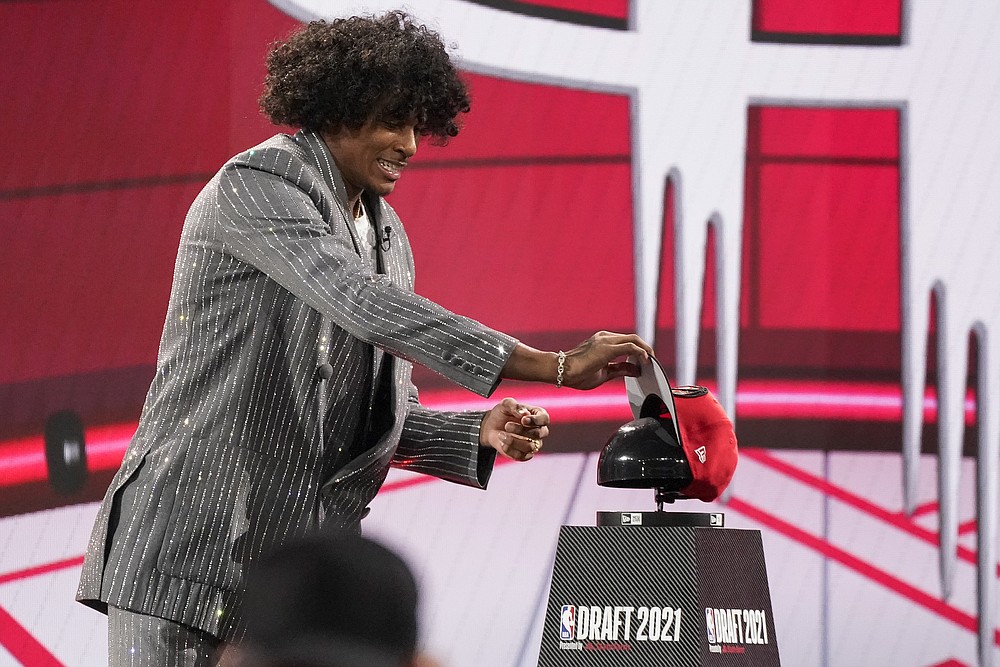 Jalen Green picks up a Houston Rockets cap after he was selected by the Houston Rockets as the second overall pick during the first round of the NBA basketball draft, Thursday, July 29, 2021, in New York. (AP Photo/Corey Sipkin) 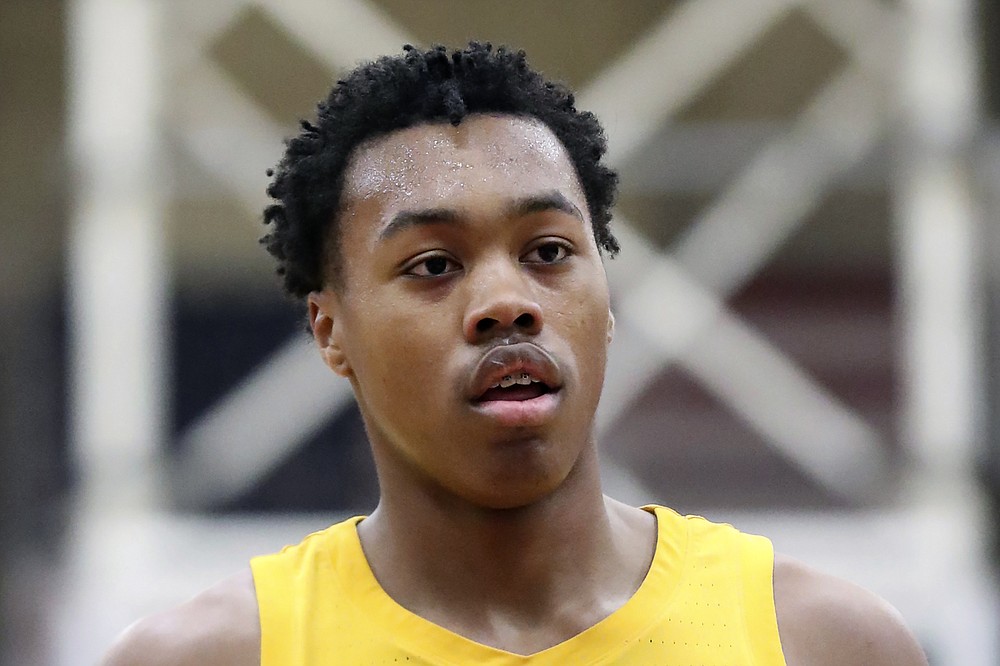 FILE - In this Jan. 19, 2020, file photo, Montverde Academy's Scottie Barnes is shown during a high school basketball game against IMG Academy at the Hoophall Classic in Springfield, Mass. Barnes was selected by the Toronto Raptors in the NBA draft Thursday, July 29, 2021. (AP Photo/Gregory Payan, File) 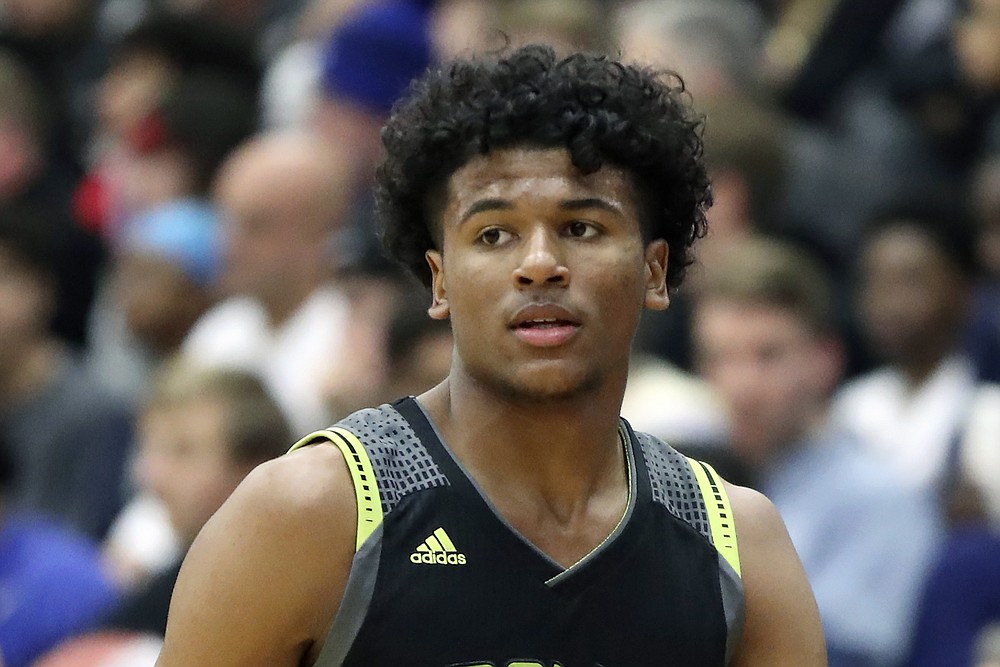 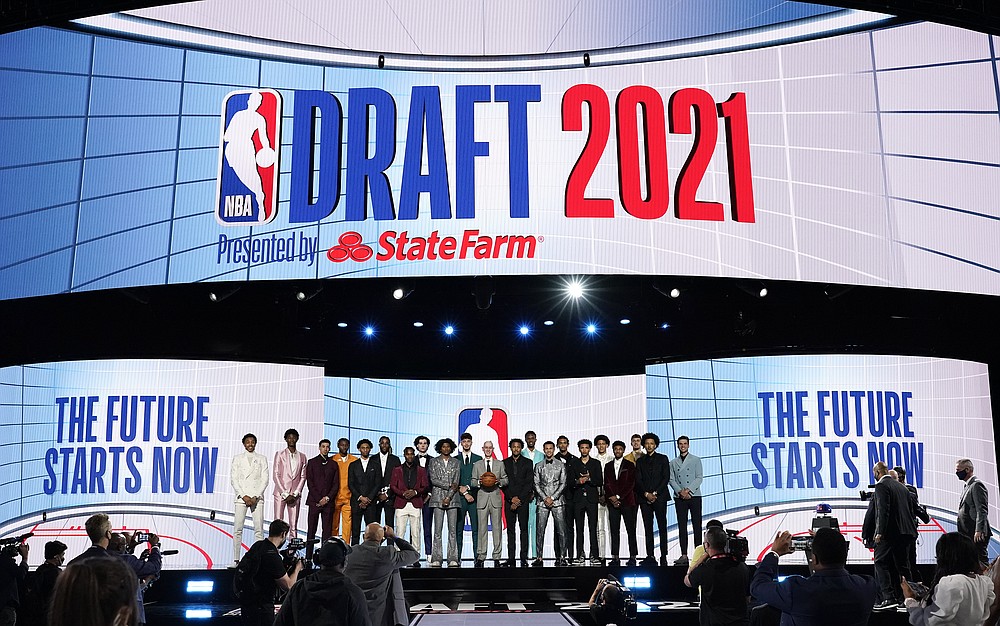