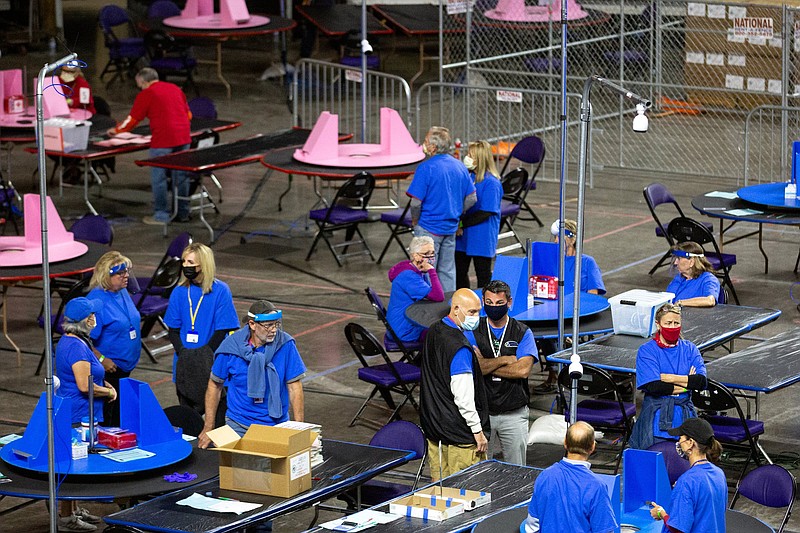 Workers examine Maricopa County ballots in May in Phoenix. As the audit of the votes comes to a close, the process has come under fire, with several state senators saying that the recount had been “botched” and that leadership had shown a “total lack of competence” in managing the project. (The Washington Post/Courtney Pedroza)

The Arizona Senate returned nearly 2.1 million ballots to the control of the state's largest county Thursday as the GOP-led recount of votes cast in the 2020 presidential election drew to a rocky close, marked by upheaval that is likely to further undermine public confidence in its conclusions, set to be announced next month.

A key audit official resigned Wednesday after voicing concerns about a lack of transparency by the private contractor hired to lead the effort to scrutinize the ballots cast in Maricopa County -- and then, hours later, took back his resignation, telling local reporters that he had negotiated better access to the process.

Meanwhile, Twitter on Tuesday suspended a string of accounts that had been promoting the ballot review, including one that had been billed as the audit's official handle, saying they violated company policies on "platform manipulation and spam."

Also this week, a previously supportive Republican state senator announced that she believes the audit has been "botched" -- the third member of a 16-member caucus to express reservations over a process that was ordered by the chamber's GOP leadership.

[Video not showing up above? Click here to view » https://www.youtube.com/watch?v=pJIwfLqO3L8]

In an interview Thursday, Ugenti-Rita, who has sponsored Republican-backed legislation to tighten election rules, said she at first supported the audit as a way to identify areas to improve Arizona's voting laws. But she said she now has concerns about the long delay in concluding the audit, about how much management Fann delegated to the private contractor and about the lack of transparency in the process -- including the fact that no hearings were held with the public or members of the Legislature.

She also said Fann had "failed to manage public expectations," allowing former President Donald Trump and others to claim the audit could be used to reverse Arizona's results.

"It's very difficult to see the end. And when it does end, because it's been so tainted, I think it puts the public in a very difficult position of deciding whether to trust this," Ugenti-Rita said. "Because I've been on the forefront of election integrity for over a decade, I care about how this audit is being managed. ... Why would I want an audit that's run into the ground and doesn't fix anything?"

The latest defection is potentially problematic for Fann, given that the GOP holds only a one-vote majority in the 30-member state Senate.

Fann has defended the audit as necessary to instill public confidence in Arizona elections.

In a tweet Wednesday, Fann said the "counting of the ballots is complete." On Thursday, pallets of cardboard boxes filled with ballots were loaded onto trucks and returned to a facility controlled by Maricopa County.

"Now we wait for the draft and final reports," Fann said.

Trump and his supporters have showcased the Arizona effort as the first step in vindicating his claims that the election was stolen -- and he has pressured other Republican-led state legislatures to initiate similar reviews.

Appearing at a rally attended by 5,000 people in Phoenix on Saturday, Trump devoted much of a nearly two-hour speech to his claims that he, not President Joe Biden, won Arizona's 11 electoral votes. He predicted that the audit would produce "outrageous" results that would force Biden's victory to be revisited in Arizona and elsewhere.

"The state senators from Arizona, it started with them. And now it's turning out to be a revolution in this country," Trump said.

Biden's victory in Arizona, the first by a Democrat since the 1990s, was certified by Republican Gov. Doug Ducey, and claims of fraud were rejected by state and federal courts. Two previous audits in Maricopa County, where Biden won by more than 2 percentage points, found the count had been accurate.

Information for this article was contributed by Jeremy Duda of The Washington Post.