Moody gets good odds for lottery 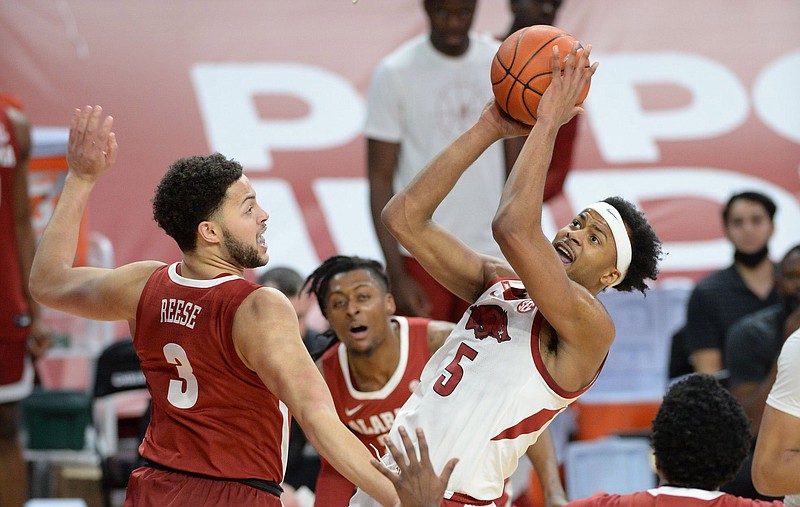 Moses Moody declared for the NBA Draft after his freshman season at Arkansas when he was named first-team All-SEC. He is expected to be chosen as early as seventh in tonight’s draft. (NWA Democrat-Gazette/Andy Shupe)

FAYETTEVILLE -- After Moses Moody worked out for the Indiana Pacers three weeks ago, he was asked during a media session what it will mean when he hears his name called at the NBA Draft.

"I really don't know yet," Moody said. "I'd imagine there will be a lot of different emotions coming toward me. But I'm just going to live in the moment, and when I get there, we'll see."

Moody will be there tonight.

The 6-6 guard from Little Rock who was a first-team All-SEC player as a freshman for the University of Arkansas last season is projected as a first-round pick when the draft is held tonight.

Moody's status is such that he's among 20 players who will be in attendance at the draft -- which begins at 7 p.m. Central at the Barclays Center, home of the Brooklyn Nets -- as an invitee of the NBA.

Various draft websites have Moody going between the sixth and 17th picks.

Austin Reaves, a guard from Newark who played at Oklahoma last season, is projected as a second-round pick.

Indiana has the 13th pick. Other teams Moody has worked out for include Orlando (fifth and eighth picks); Golden State (seventh and 14th picks); Sacramento (ninth); Memphis (which traded up from the 17th to the 10th pick); and Charlotte (11th). He also met with officials from San Antonio (12th) and the New York Knicks (19th).

"He's a lottery pick [first 14], and I would be very surprised if he's not top 10," ESPN draft analyst Jay Bilas said this week. "I'm a big believer in Moses Moody. He not only has size, but he's got great length. His arms go forever."

Moody was measured with a 7-0 3/4 wingspan at the NBA scouting combine.

"And he can make shots," Bilas said. "He's a scorer that can not only knock down a perimeter shot and a mid-range shot, but he gets to the free-throw line and that's a skill."

"I can shoot. That fits in on any roster," Moody told Indiana media when asked what he'll bring to whichever team drafts him. "Obviously that's going to be something I'll definitely add.

"I'm also going to defend my butt off on every possession. Those are two things I'm going to do regardless, and the rest, I'll figure out."

Former Razorback Ronnie Brewer, Arkansas' new recruiting coordinator, was the 14th pick of the 2006 NBA Draft by the Utah Jazz. Moody could be Arkansas' first lottery pick since Brewer and first in the top 10 since 2001, when Joe Johnson was chosen No. 10 by the Boston Celtics. He will be the Razorbacks' first pick in the first round since 2015 when Bobby Portis went No. 22 to the Chicago Bulls.

Moody was 18 during his season with the Razorbacks. He turned 19 on May 31.

"First of all, he's mature beyond his age," Brewer said. "He goes out there and plays at a pace that's comfortable within himself. He's very versatile.

"He can catch and shoot. He can put the ball on the floor in the mid-range, and he can get all the way to the basket. He's athletic enough to finish at the rim with contact.

"He's a very savvy, high basketball IQ player. He doesn't force a lot. Those are things that translate to the NBA. A lot of people that know the game say, 'Hey man, that guy has a pro game.' "

Musselman -- who was an NBA head coach with Golden State and Sacramento and assistant with Minnesota, Orlando, Atlanta and Memphis -- said Moody prepared like a pro whether it was in film study, practice or games.

"Any NBA team that puts a premium on execution would like Moses," Musselman told Yahoo Sports. "The veterans on the team are going to like him and respect him, which is not always the case with rookies.

"He's a player they're all going to respect from the get-go because of the type of teammates he is and how he is in the locker room. He's as unselfish as anybody we've had."

Moody said playing for Musselman prepared him for the NBA.

"He's obviously an NBA guy," Moody said after he worked out for Golden State two weeks ago. "It's like I got introduced to the game a year early.

"A lot of the terminology, a lot of the positioning, floor spacing. Those are things I've been working on for a while now. So I definitely feel like I had a head start."

Bilas agreed Moody benefited from playing for Musselman, who was Nevada's coach before coming to Arkansas.

"The NBA experience is helpful, but it's the level of detail that he has as a coach," Bilas said. "The scouting stuff, those guys are detail-oriented.

"I'm a believer that players respond to whatever the coach really believes in. Some coaches, they play music during practice, they do this, they do that.

"Eric's really detail-oriented and really high energy. I think the players respond and clearly they responded really well to it at Nevada and Arkansas.

"I think Moses certainly benefited from being around that level of detail. You could see his improvement throughout the course of the year as a result of it."

Moody is represented by Klutch Sports Group and has been training in Los Angeles.

Recently when Moody was hanging out at the house of his agent, Rich Paul, he met Golden State forward Draymond Green, another of Klutch's clients who has won three NBA titles with the Warriors.

"One of the biggest things [Green] was saying was keep the main thing the main thing, which is basketball," Moody said. "Getting into the league, there can be a lot of different distractions. There are a lot of ways you could go. But when it comes down to it, you're a basketball player. So do that."

TV ABC (first round only) and ESPN (first and second rounds)

ON THE CLOCK Detroit Pistons

Where will Moody be picked?

Here is a list of where several websites predict Moses Moody, the former University of Arkansas guard from Little Rock, will be picked in tonight’s NBA Draft: 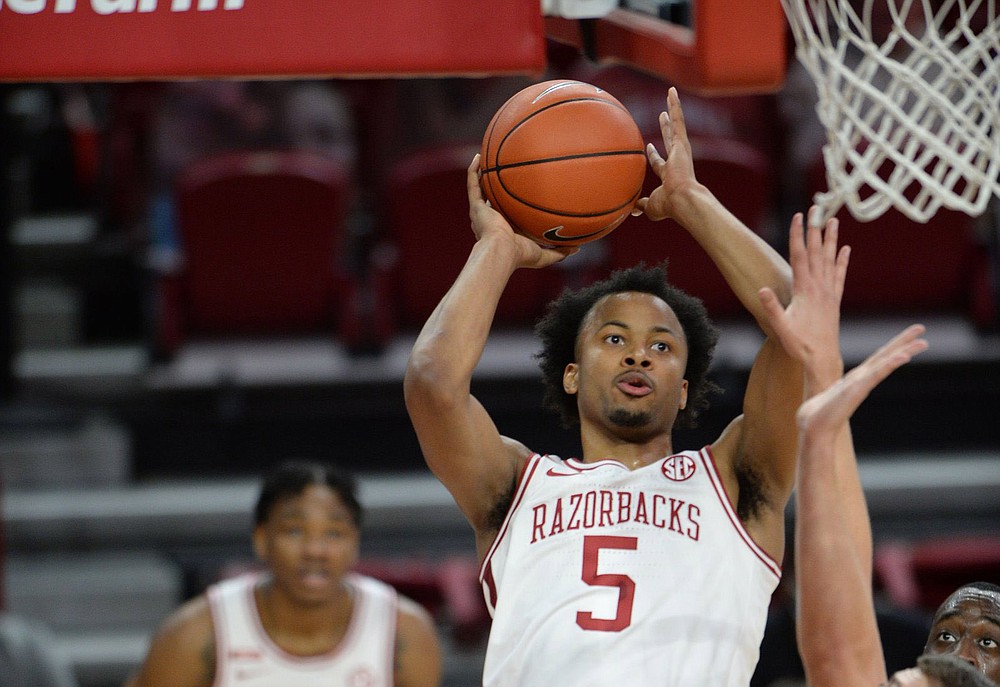 University of Arkansas guard Moses Moody is projected to be taken as high as seventh by the Golden State Warriors in tonight’s NBA Draft and as low as 17th by the New Orleans Pelicans. (NWA Democrat-Gazette/Andy Shupe)