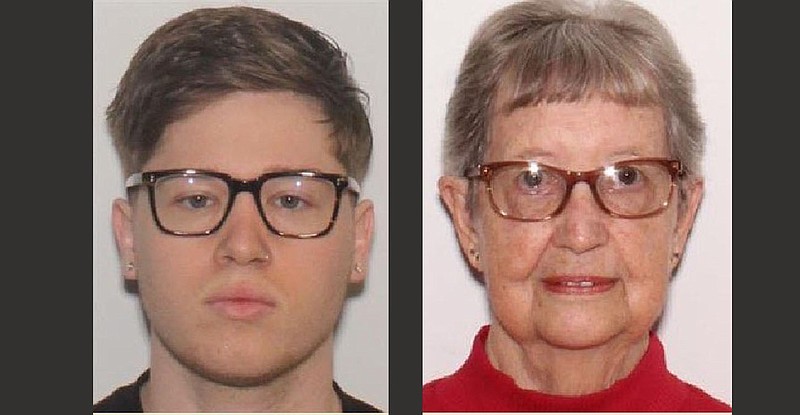 Shown from left are Zachary Brian Arnold and Lois Hicks

FORT SMITH — A Fort Smith man who stopped a shooting rampage in May by killing the gunman won’t face criminal charges, prosecutors said.

Sebastian County Prosecutor Dan Shue announced his decision Wednesday in a letter to Police Chief Danny Baker. Shue said after reviewing the investigative reports surrounding the shooting, his office concluded Wallace A. West, 58, was justified under Arkansas law in the fatal shooting of Zachary Brian Arnold, 26.

West shot Arnold after Arnold killed Lois Hicks, 87, in her home at Three Corners Apartments at 3600 S. 74th St., according to police.

“Mr. West acted lawfully when he shot Mr. Arnold and likely saved a number of lives in the process,” a Police Department news release states. “At last count, Mr. Arnold had fired 93 rounds from his semiautomatic rifle before Mr. West was able to stop him. There were no other fatalities or injuries, though a number of residents were home at the time of the assault.”

The Police Department started receiving calls of a shooting at the apartment complex about 7:15 a.m. May 15, according to Shue. Arnold came out of his apartment firing a semiautomatic rifle while yelling at his neighbors to come outside, according to police.

Hicks came outside to check on Arnold, who chased her into her apartment and shot her multiple times.

West, identified in the Police Department news release Wednesday as an off-duty employee of the U.S. Department of Homeland Security, woke to the sound of gunshots, Shue wrote. He ran outside and saw Arnold shooting into Hicks’ apartment.

West then grabbed a bolt action rifle, which was scoped and loaded, from his gun cabinet, stepped onto his balcony and fired once at Arnold, missing him because he was “shaking so badly,” according to his witness statement.

Arnold went back into his apartment, presumably to reload, and he came back outside, Shue wrote. He began walking down the complex, rifle in hand, according to West. West took a second shot, which struck Arnold in the head and killed him.

Arnold’s mother told police the incident surprised her, describing her son as “pleasant and good-natured” growing up, according to Shue. However, Arnold began sending her and other family members text messages the day before stating they were sinners and they were going to pay for their sins.

Arnold had been on prescription medications for post-traumatic stress disorder after returning from Army deployment in Afghanistan, his mother said. He told her recently the medication made him sick and he decided to stop taking it, choosing instead to self-medicate with marijuana.

“She stated that to her knowledge, Zachary only used marijuana, and she was pretty sure her son did not have a medical marijuana card,” Shue wrote. “She said that her son had told her that he did not go outside anymore, and she stated that, for the last month or so, he had been on the decline mentally.”

Shue wrote West had a reasonable belief Arnold, in addition to being armed and dangerous, committed first degree murder and was actively committing attempted first degree murder, aggravated assault and first degree terroristic threatening during the shooting. Shue found it “objectively reasonable” West felt it was necessary to employ deadly force in this situation to defend himself, his son and others.

“Although there are unfortunately mental health aspects to this case, had West not acted in a swift and decisive manner, my office could just as easily be dealing with multiple homicides rather than the homicide of Lois Hicks and the justified shooting of Zachary Arnold,” Shue wrote.

A person is justified in using deadly physical force upon another person if the person reasonably believes that the other person is:

• Committing or about to commit a felony involving force or violence;

• Using or about to use unlawful deadly physical force; or

• Imminently endangering the person’s life or imminently about to victimize the person as described in § 9-15-103 from the continuation of a pattern of domestic abuse.

However, a person is not required to retreat if the person is:

• Unable to retreat with complete safety;