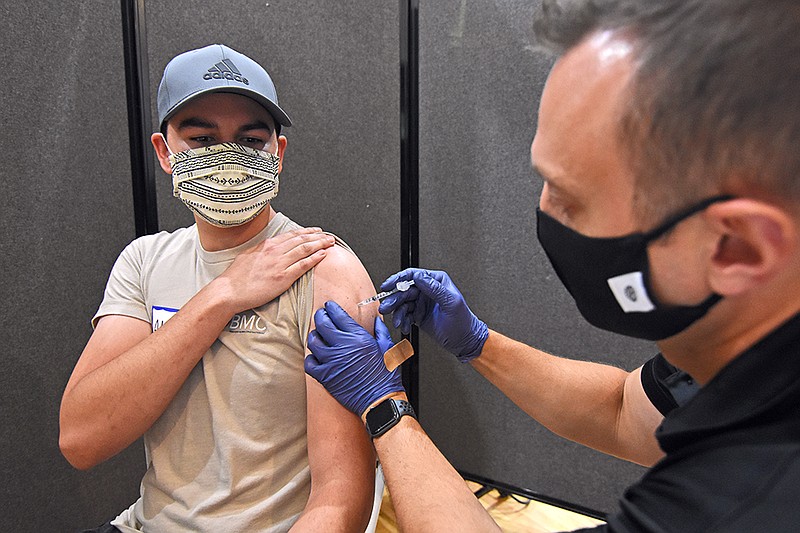 Alec DeSantiago of Little Rock gets his first dose of the Pfizer coronavirus vaccine from Nick Dziurkowski, a pharmacist for the Pharmacy at Wellington, Sunday, June 27, 2021, during the Community Health Fair at the Islamic Center of Little Rock. (Arkansas Democrat-Gazette/Staci Vandagriff)

A day after topping 1,000 for the first time since January, the number of covid-19 patients in Arkansas hospitals continued rising on Wednesday as the state's count of cases rose by 1,703.

The state's death toll from the virus, as tracked by the Department of Health, rose by 12, to 6,099.

While smaller than the spike of 2,052 cases on Tuesday, the increase in cases Wednesday was larger by 244 than the one the previous Wednesday.

Already at its highest level since early February, the average daily increase in the state's case count rose to 1,609.

After topping 200 on Tuesday for the first time in January, the number of virus patients who were on ventilators rose Wednesday by four, to 209.

The number of covid-19 patients who were in intensive care, however, fell by one, to 386.

Health Department figures also continued to show an uptick in vaccinations in the state.

At 10,846, the increase in the doses providers reported having administered, including second doses of the Pfizer and Moderna vaccines, was larger by more than 1,000 than the one a week earlier.

Already at its highest level since the week ending May 14, the average number of doses administered each day over a rolling seven-day period rose to 9,425.