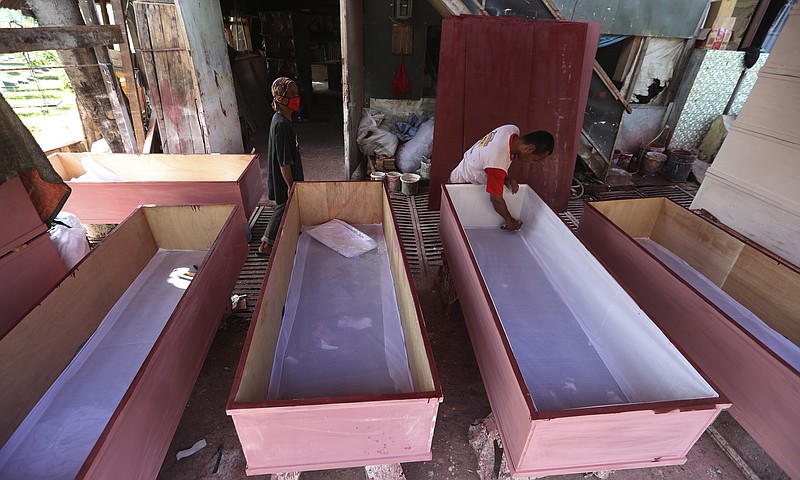 Workers make coffins to be used for victims of the coronavirus in Jakarta, Indonesia, Tuesday, July 27, 2021. Indonesia has been showing sharp increases since late June. (AP Photo/Achmad Ibrahim)

JAKARTA, Indonesia -- Thousands of foreigners have left Indonesia in recent weeks, airport records released Tuesday showed, apparently spurred by a pandemic wave and a general shortage of vaccines, which have gone to high-priority groups first.

Indonesia now has the most confirmed daily cases in Asia, as infections and deaths have surged over the past month and India's outbreak has waned. Infections peaked in mid-July, with the highest daily average reported at more than 50,000 new cases. Until mid-June, daily cases had been running at about 8,000.

Since early this month, nearly 19,000 foreigners have left through Soekarno-Hatta International Airport in the capital, Jakarta.

The exodus increased significantly in the past three days alone, accounting for nearly half of all individual departures this month, said Sam Fernando, who heads the immigration authority at the airport.

Japan's ambassador to Indonesia, Kenji Kanasugi, said the difficulty of getting vaccines for foreigners has prompted some Japanese citizens to get vaccinated in their home country.

"Amid a pandemic situation that is very difficult for all of us, some Japanese citizens in Indonesia will temporarily return to Japan," Kanasugi said on Instagram earlier this month.

Japanese and Chinese citizens made up the largest share of departures, with 2,962 and 2,219 people respectively, followed by 1,616 South Koreans. Airport figures also showed departures by 1,425 Americans, as well as 842 French, 705 Russian, 700 British, 615 German and 546 Saudi Arabian citizens.

Initially, only representatives of foreign countries and international nonprofit organizations were eligible for the government's free vaccine program. The program was expanded last month to include those aged 60 and older, as well as teachers and education staff members.

Wiku Adisasmito, a spokesman for the National Covid-19 Task Force, said Tuesday that limited vaccine supply remains a challenge. He expressed hope that 45 million more doses set to arrive in August would improve the situation.

Indonesia, home to 270 million people, had secured at least 151.8 million vaccine doses by late July. The vast majority of doses -- 126.5 million -- are from the Chinese pharmaceutical company Sinovac.

Indonesia's confirmed daily death toll surpassed 2,000 for the first time Tuesday, hitting 2,069. The Health Ministry reported 45,203 new confirmed cases as the health system struggles to cope, and even patients fortunate enough to get a hospital bed are not guaranteed oxygen.

Several countries have announced new bans or restrictions on travelers from Indonesia, including neighboring Singapore and the Philippines. Saudi Arabia, the United Arab Emirates, Oman, Taiwan and Hong Kong are also among the nations and territories that have placed Indonesia on their travel-ban list.

Overall, Indonesia has reported more than 3.2 million cases and 86,835 fatalities. Those figures are widely believed to be a vast undercount because of low testing and poor tracing measures. 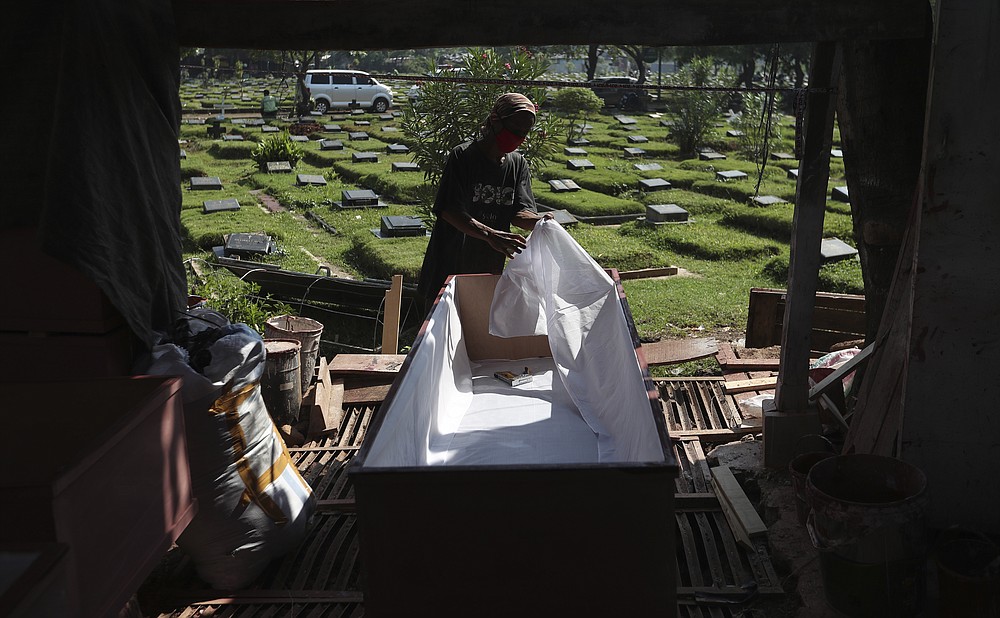 A worker makes a coffin to be used for victims of the coronavirus in Jakarta, Indonesia, Tuesday, July 27, 2021. Indonesia has been showing sharp increases since late June. (AP Photo/Achmad Ibrahim) 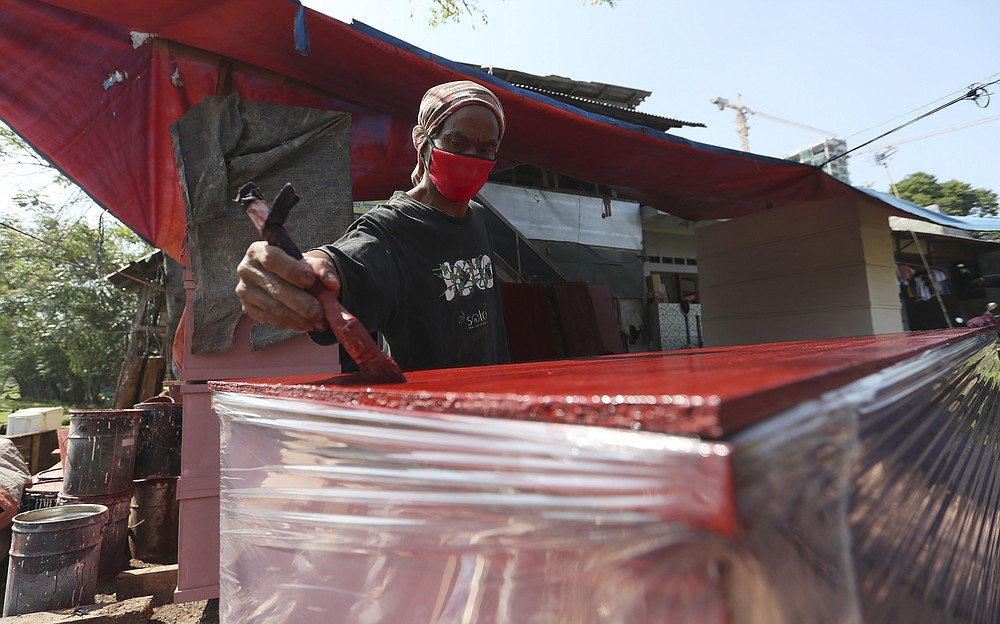 A worker paints in a process of making a coffin which will be used for victims of the coronavirus in Jakarta, Indonesia, Tuesday, July 27, 2021. Indonesia has been showing sharp increases since late June. (AP Photo/Achmad Ibrahim) 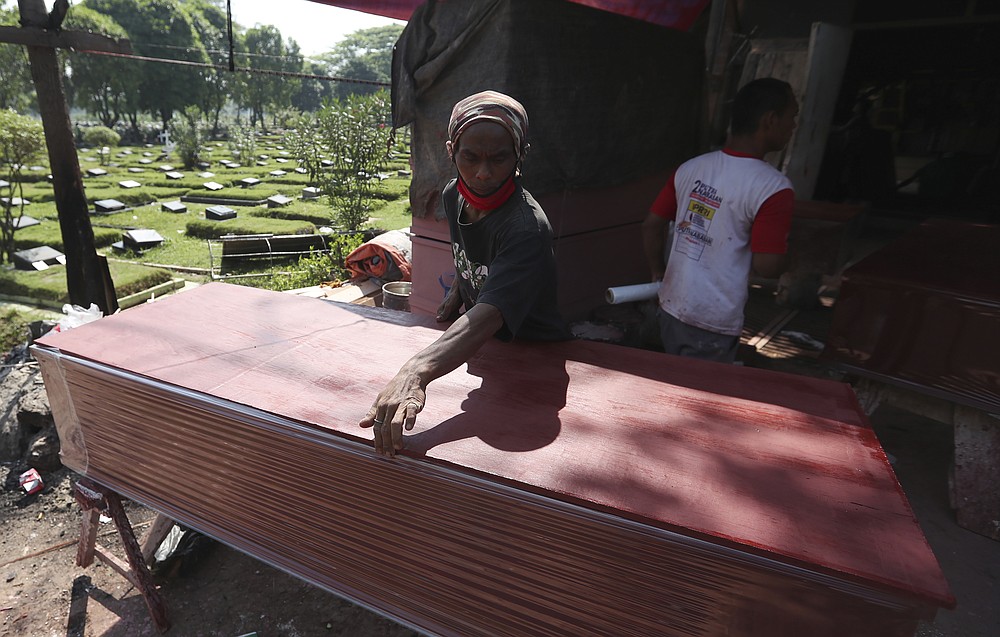 Workers make coffins to be used for victims of the coronavirus in Jakarta, Indonesia, Tuesday, July 27, 2021. Indonesia has been showing sharp increases since late June. (AP Photo/Achmad Ibrahim)