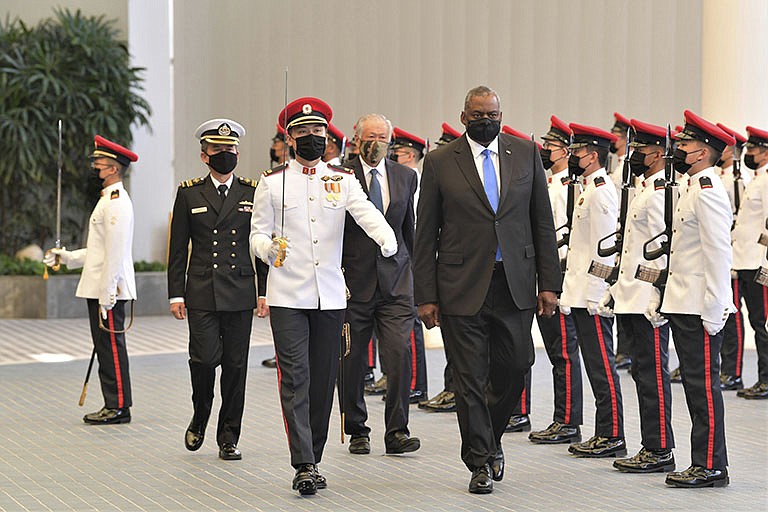 Defense Secretary Lloyd Austin sought to reassure the Asia-Pacific that the U.S. was committed to engagement in the region, while vowing to challenge what he called China's aggression.

"We will not flinch when our interests are threatened," Austin said in a speech Tuesday in Singapore. "Yet we do not seek confrontation."

[Video not showing up above? Click here to watch » https://www.youtube.com/watch?v=fuyT-DHcCIE]

Austin's remarks focused on U.S. ties with Association of Southeast Asian Nations, including the millions of vaccines that Washington has donated to the region. But he also stressed that the U.S. and its partners face a common challenge in China.

The former U.S. Army general told the event hosted by the International Institute for Strategic Studies that Washington would work "with partners to deter coercion and aggression across the spectrum of conflict," including Chinese maritime claims in regional waters and assertive military actions.

"Unfortunately, Beijing's unwillingness to resolve disputes peacefully and respect the rule of law isn't just occurring on the water," Austin said. "We have also seen aggression against India, destabilizing military activity and other forms of coercion against the people of Taiwan and genocide and crimes against humanity against Uyghur Muslims in Xinjiang."

Austin's trip, his second to the region as secretary, comes at a time of mounting U.S.-China tensions and as countries across Southeast Asia struggle with a surge in coronavirus cases. Diplomats from Washington and Beijing held contentious meetings in the Chinese port city of Tianjin on Monday, where America's No. 2 diplomat Wendy Sherman and Foreign Minister Wang Yi both aired a series of grievances.

The Pentagon chief's visit coincides with the U.S. military drawdowns in Afghanistan and Iraq, a move that will allow Washington to shift more of its focus to the Western Pacific. That strategic shift will be part of talks during U.S. Secretary of State Antony Blinken's trip to Asia this week. The top American diplomat will travel to New Delhi to meet with Prime Minister Narendra Modi today before flying to Kuwait.

Austin was greeted by Singaporean Defense Minister Ng Eng Hen after he arrived and reviewed soldiers in dress uniform. The two men discussed "the regional security environment and agreed on the importance of sustaining a rules-based order," according to a joint statement.

He later met with Singapore Prime Minister Lee Hsien Loong, who said in a Facebook post they "had a good discussion on regional and international developments, as well as defense cooperation." Austin is scheduled to deliver a speech later in the day about the value America places on its regional partners before traveling to meet his counterparts in Vietnam and the Philippines.

In his speech, Austin said the U.S. would help the region "build back better" after covid-19 by helping fight the pandemic and investing in defense capabilities that can help states deter threats. But even as he referred to the "specter of coercion from rising powers," he reaffirmed that America didn't want a military clash with China.

"I am committed to pursuing a constructive, stable relationship with China, including stronger crisis communications with the People's Liberation Army," he said. "Big powers need to model transparency and communication. And we hope that we can work together with Beijing on common challenges, especially the threat of climate change."