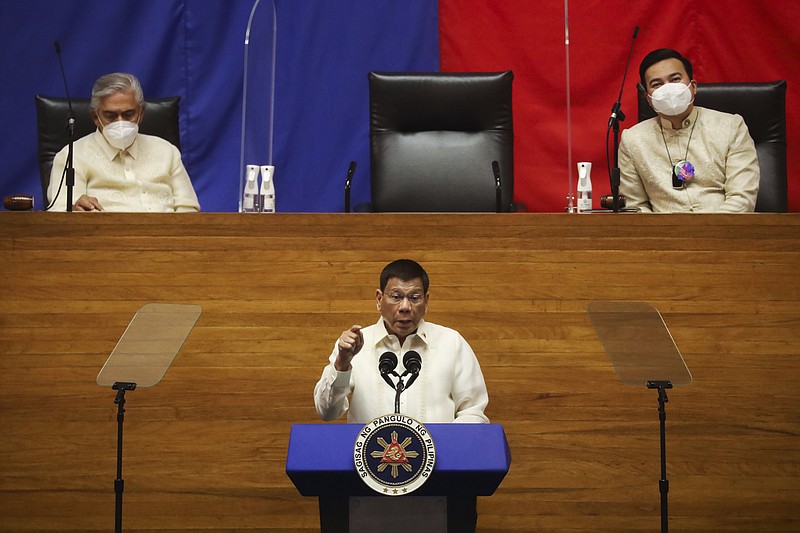 Philippine President Rodrigo Duterte, center, delivers his final State of the Nation Address as Senate President Vicente Sotto III, left, and House Speaker Lord Allan Velasco listens at the House of Representatives in Quezon City, Philippines on Monday, July 26, 2021. Duterte delivered his final State of the Nation speech Monday before Congress, winding down his six-year term amid a raging pandemic, a battered economy and a legacy overshadowed by a bloody anti-drug crackdown that set off complaints of mass murder before the International Criminal Court. (Lisa Marie David/Pool Photo via AP)

MANILA, Philippines -- Philippine President Rodrigo Duterte unabashedly renewed his threat to kill drug dealers in his final state of the nation speech Monday, while defending his nonconfrontational approach in the country's territorial dispute with China in the South China Sea.

Duterte, 76, who won a six-year term in 2016, is winding down his often-tumultuous presidency amid a raging pandemic, a battered economy and a legacy overshadowed by his deadly campaign against illegal drugs that has set off complaints of mass murder before the International Criminal Court.

While many expected him to focus on the coronavirus pandemic, which has devastated the economy and worsened hunger and poverty, Duterte devoted most of a rambling, nearly three-hour televised speech to other topics he has addressed repeatedly in the past.

He reiterated his threat to kill drug dealers, saying it is tougher to fight criminals "the legal way," while daring the International Criminal Court to record his remarks.

"You can do it the legal way, but it would take you months and years," Duterte told an audience of legislators, Cabinet members and foreign diplomats.

Duterte and police officials have denied condoning extrajudicial killings, but he has repeatedly threatened to kill suspects in his public speeches. More than 6,000 mostly petty suspects have been killed during police drug raids. In addition, a large number have been gunned down by motorcycle-riding assassins who human rights groups suspect are linked to law enforcement.

The killings have alarmed Western governments, U.N. rights experts and human rights groups. Duterte has acknowledged that he failed to fulfill a campaign promise to eradicate the drug menace and deeply entrenched corruption within six months of becoming president. But he said he had found at least nine police generals and Bureau of Customs officials were involved in the drug trade.

"I did not know that I was fighting my own government," he said, although the involvement of law enforcers and public officials has long been reported.

Randy Delos Santos, whose 17-year-old nephew, Kian, was shot to death in 2017 by three officers who were later convicted of murder, said the poor have been traumatized by the drug crackdown.

"He has not won this war on drugs, because the problem is still there, but a lot of families have lost their breadwinners," Delos Santos told The Associated Press. "We're the biggest loser and we still live in fear."

An International Criminal Court prosecutor said last month that a preliminary examination found reason to believe crimes against humanity had been committed and sought permission to open a formal investigation. Duterte said he would never cooperate with such an investigation.

Allies have defended Duterte's record, with documentaries on state-run TV and speeches highlighting his administration's efforts to fight criminality, poverty, corruption and decades-long communist and Muslim insurgencies, as well as build infrastructure.

But increasingly vocal opponents have criticized his handling of key issues, including his refusal to confront China's pressing of territorial claims in the South China Sea.

Duterte said he had not aggressively confronted China because a military solution is not an option for the weaker Philippines.

"It will be a massacre if I go and fight a war now," Duterte said. "We are not yet a competent and able enemy of the other side."

Duterte thanked medical workers who are fighting the coronavirus along with private companies and foreign banks that provided help and funds.

He said the economy can hardly endure more lockdowns, but that if the delta variant spreads widely he would have little option but to resort to more restrictions.

"I really do not know what to do. I have to listen to the task force," he said, referring to a government body of Cabinet officials and medical experts.

Information for this article was contributed by Joeal Calupitan and Aaron Favila of The Associated Press.