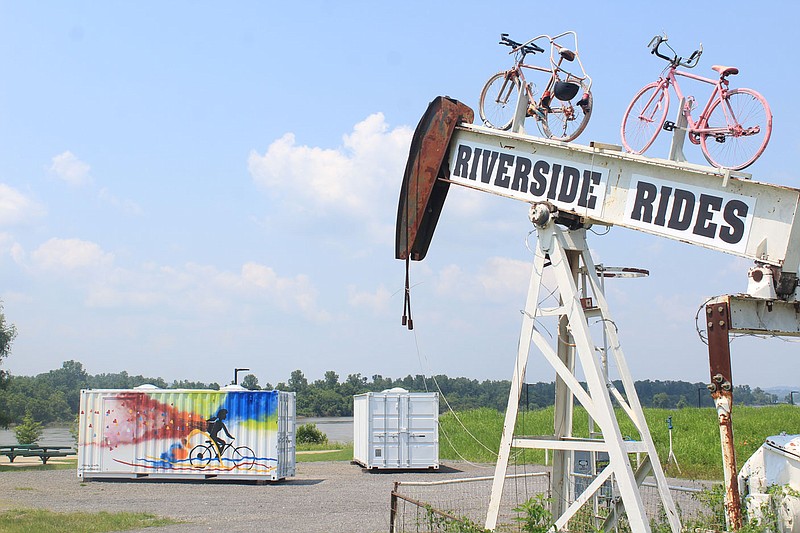 FORT SMITH -- Money originally designated for a bike share plan now will go to a similar program hopefully until it can sufficiently run, one of its operators said.

Riverside Rides, operated through the 501c3 Future Launch, will receive $1,300 monthly for a year starting in August. The money originally was planned to support a riverfront bike share program through for-profit group Zagster, which folded its Fort Smith efforts in 2020 due to covid-19.

It's almost all of the estimated monthly $1,500 needed to pay the Future School students who run the Riverside Rides, said Griffin Hanna of KMW Properties. Hanna and Phil White, an area developer, are using Riverside Rides to teach a business class at the public charter school in Fort Smith.

White said he hopes thewill keep Riverside Rides afloat until it can sustain itself through revenue from bike rentals. He said people he declined to name have put money into the Future Launch account to pay the students.

The 20 bicycles, which were donated to the program, cost $8 for the first 30 minutes of use and $12 per hour, White said.

The program would have shared the riverfront with Zagster's ride service had the company not folded in 2020.

The city board on Tuesday approved giving the monthly sum to Riverside Rides.

White said covid-19 and the hot weather have impacted rentals, which has kept the program from being as successful as he would like. Logan said implementing the program "got a little tricky" while the state in 2020 didn't allow school-sponsored activities.

White added the class needs to do a better job of marketing Riverside Rides to the public. The class doesn't have a marketing budget.

Hanna said he and White have rearranged the expenses to where they don't need as much as they did in 2020.

While Logan said "it's OK" if Riverside Rides doesn't swing a profit, he acknowledged White and Hanna want it to succeed.

"They want those kids to really shoot for having a sustainable business, so that's the goal," said Logan.

"It's not necessarily the business itself, the bike rental place, but it's getting them those skills that they can then translate somewhere in the future," Martin said.

A bike share program employs a station where users may rent a bicycle for a small fee.