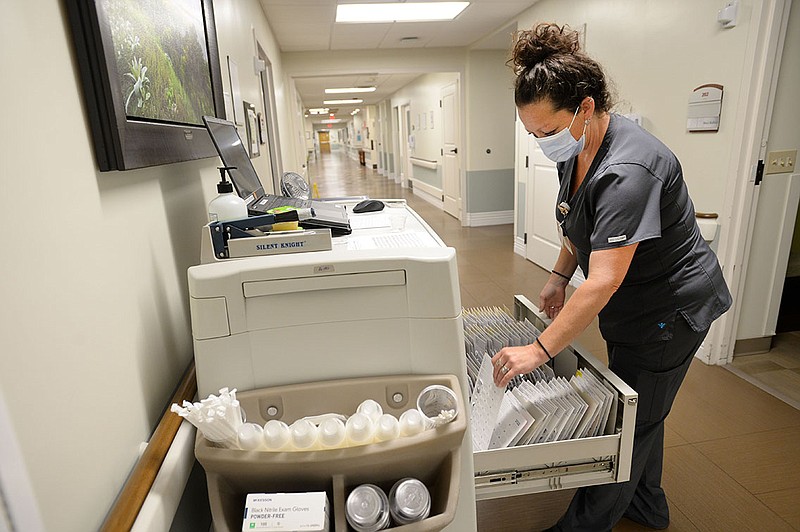 Robyn Sims, a registered nurse at Butterfield Trail Village, distributes medications Friday while working at the center in Fayetteville. Butterfield Trail Village has achieved a high rate of vaccination among its staff and resident population and is one of seven of the 21 nursing homes in Benton and Washington counties to have reached the federal benchmark of vaccinating 75% of staff for covid-19. Visit nwaonline.com/210724Daily/ for today’s photo gallery. (NWA Democrat-Gazette/Andy Shupe)

Seven of the 23 nursing homes in Benton and Washington counties have achieved the benchmark of 75% of their staff receiving a covid-19 vaccination.

The benchmark is a national goal set by the American Health Care Association, a trade association for long-term care facilities, and LeadingAge, an organization representing aging services providers, according to Rachel Bunch, the association's executive director.

"We are proud to report that seven Northwest Arkansas facilities have vaccinated over 82% of their staff," said Bunch. "Our teams recognize that getting vaccinated is one of the most effective ways to protect themselves, their residents and their families against covid-19."

Forty-nine of the 223 nursing homes in Arkansas have achieved the 75% benchmark, according to the Centers for Medicare and Medicaid Services. In June, the federal agency began requiring nursing homes to submit the percentage of vaccinated staff and residents each week, according to a news release. The numbers are published on data.cms.gov.

Overall, 56.6% of Arkansas nursing home staff and 81.9% of residents had been vaccinated for covid-19 as of July 11, according to Centers for Medicare and Medicaid Services data. The federal Centers for Disease Control and Prevention shows slightly higher numbers for Arkansas, with 62.4% of nursing home staff and 86.5% of residents receiving vaccines.

The Arkansas Department of Health reports 40.7% of the state's population older than 12 has been vaccinated.

The vaccination rate among nursing home staff and residents is important because it helps protect the elderly population, which is most vulnerable to covid-19, according to Dr. Atul Kothari, medical director for the Department of Health's Healthcare-Associated Infections Program.

"That high 70 to 80% threshold helps to reduce the number of susceptible individuals in the community," he said. "Herd immunity happens when a large part of the population -- the herd -- is immune to a virus. This can happen either because these people got vaccinated or had already been infected. Herd immunity makes it harder for a virus to spread. So even those who haven't been sick or vaccinated have some protection."

While nursing home staff have done a great job and Arkansas nursing home vaccination rates are among the highest in the South, the state is still striving to do better, he said.

"We aim for 100% vaccination rate among staff," Kothari said.

In Benton and Washington counties, some nursing homes have vaccinated nearly all staff and residents, while others fall below the state averages for the general population.

Jamestown Nursing and Rehab of Rogers had the highest percentages, with more than 98% of both staff and residents vaccinated as of July 11, according to Centers for Medicare and Medicaid Services data.

The Waters, also known as The Blossoms, of Rogers had the lowest percentage of immunized staff and residents, with 31.6% of staff vaccinated and 60.5% of residents vaccinated, Centers for Medicare and Medicaid Services data shows.

An administrator from Jamestown Nursing and Rehab said two weeks in a row he was seeking permission to talk about the vaccination rate.

Officials at The Waters didn't respond to two messages. An email sent to an address listed on the nursing home's website came back as undeliverable.

Nursing home residents account for about a third of Arkansas' covid-19 death toll, although most nursing home deaths occurred before vaccines were available.

According to the Arkansas Department of Health, 2,094 of the state's 6,035 deaths were among nursing home patients.

The number of nursing home deaths in Arkansas peaked at 129 during the week of Nov. 29, then fell to the double digits by the week of Dec. 27. There have been fewer than 25 deaths a week since March and last week there were 13, department data shows.

Since vaccinations started picking up in January and February, the number of covid-19 deaths and cases has fallen to just a handful, Kothari said.

"This is why I think vaccinations have been so important for nursing home residents and the general community," he said. "We are not seeing a surge in cases among residents in nursing homes."

Bunch also noted a quick decline in cases as soon as the vaccine rolled out in January. During the current surge, nursing homes across the state are seeing hundreds of cases rather than the thousands of cases they saw last fall, Bunch said.

Nursing homes are also better equipped this time around, with more tools and plans in place, she said.

"From our perspective the vaccine has been an absolute game changer," she said.

Nursing home residents are called residents and not patients because federal guidelines consider their rooms to be their homes, Deaver said.

"If someone walks into your home and is taking care of you, you have the right to say 'I want them to be vaccinated,'" she said.

Deaver called the death toll "carnage," pointing out during the pandemic, families weren't able to visit their loved ones in nursing homes to make sure they were receiving proper care.

Individual nursing homes decide on their own policies and some nursing homes in the state have required staff to be vaccinated, Bunch said. While she didn't have an exact number, she said her organization is seeing more nursing homes move toward a vaccine requirement.

The facility has 87 Medicare certified beds, 60 to 70 full-time employees, and an additional 40 part-time or as-needed staff, according to Jay Green, director of health care services.

The nursing home began educating staff on the various vaccines and risks and benefits before vaccines were available, he said. When vaccines became available, the facility partnered with a local pharmacy for on-site vaccination clinics and has continued to educate and provide staff with information on where to receive a vaccine, he said.

The high vaccination rate among staff members also lowers the chances the facility will be impacted by staffing shortages during an outbreak, Green said.

The Arkansas Department of Health has intensified efforts to increase the number of vaccination education clinics, formatted like town hall meetings, Kothari said.

"We really try to have a one-on-one session for providers where we can talk to them about their fears about vaccinations and side effects," he said.

The department has been looking at nursing homes with low vaccination rates to help organize vaccination education sessions or clinics if they are interested, he said.

Arkansas Health Care Association has been working to increase the vaccination rate in nursing homes by making sure facilities have access to vaccines, Bunch said. Early on, the association had clinics scheduled at every facility but long-term care is fluid, with patients and workers coming and going, so the organization had to ensure nursing homes continued to have a consistent supply of vaccine, she said.

The association has also worked to provide long-term specific information and education about vaccination, including a series of webinars, so nursing homes are equipped to share facts and information with their staff and residents.

Some nursing homes have a much higher uptake rate than others, while others have struggled, Bunch said. The association matches struggling homes with resources from the Department of Health, she said. 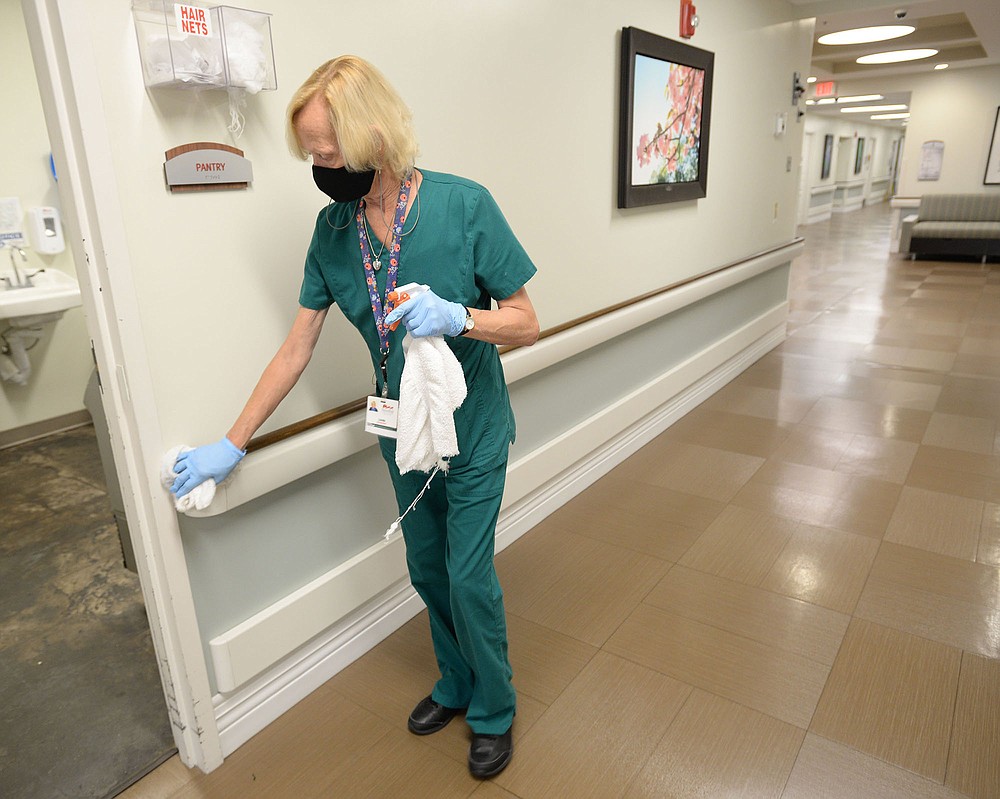 Linda Raddhez, a housekeeper at Butterfield Trail Village, cleans surfaces Friday, July 23, 2021, while working at the center in Fayetteville. Butterfield Trail Village has achieved a high rate of vaccination among its staff and resident population and is one of seven of the 21 nursing homes in Benton and Washington counties to have reached the federal benchmark of vaccinating 75% of staff for covid-19. Visit nwaonline.com/210724Daily/ for today's photo gallery. (NWA Democrat-Gazette/Andy Shupe)
More News

Seven nursing homes in Benton and Washington counties have reached the benchmark of vaccinating 75% of staff as of July 18.

Other nursing homes include: