Moths have been partying in your closets 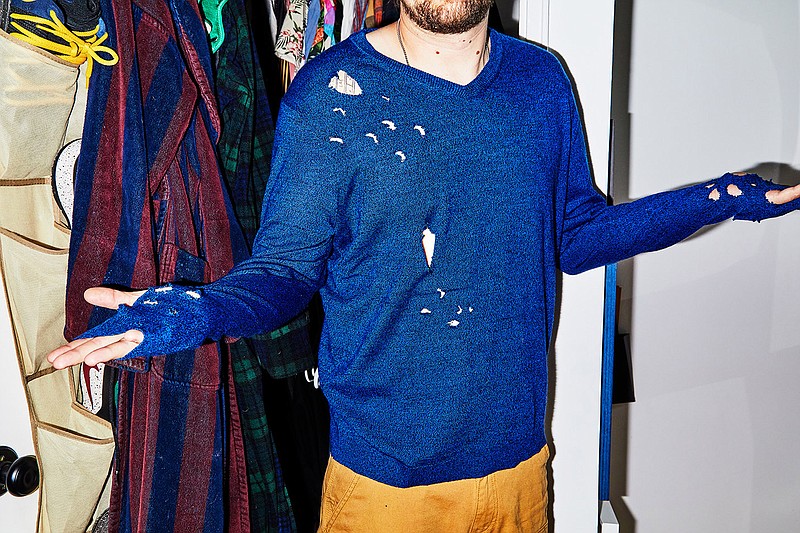 A sweater is littered with moth holes in Jackson Heights, N.Y., last month. When the newly vaccinated opened their closets in late spring after a year spent in bottom-drawer athleisure, many discovered that while they had left their suits and fine knits undisturbed, the moths had not. (The New York Times/Amy Lombard)

Love, 29, a model in Los Angeles, has waged war against the webbing clothes moths that she recently discovered during a quarantine closet cleaning, finding the pests running rampant in her knitwear.

"I wore sweatpants and leggings for a year, and my clothes didn't get touched," she said. She had to throw away everything from wool ski leggings to a 50-year-old Lucien Pellat Finet cashmere cardigan. "These are some bougie moths, they loved that one."

Love, who moved from the East Coast during the pandemic, has since wallpapered her closet with cedar sheets held up by painters tape, keeping a prized rainbow-striped Elder Statesman sweater in a special moth booby trap with a cedar ball in each sleeve and moth monitoring pheromone traps above and below it.

"The whole thing is a psycho moth trap now," she said. "I never had a problem in New York, but in New York, pre-covid, I was actually wearing my clothes."

When the newly vaccinated opened their closets in late spring after a year spent in bottom-drawer athleisure, many discovered that while they had left their suits and fine knits undisturbed, the moths had not.

"It's always the piece that gets put away in the dark -- if not disturbed the moth is happy," said Jill Gordon, an entomologist and consultant nicknamed "the moth doctor" and "Dr. Jill" by clients. "I've seen an increase in the entire pest population, not just moths, and it's definitely due to corona and people locking up homes and leaving. The pest population that may or may not have been there before had free rein to go in and eat, drink and be merry."

Gordon, 62, who is also a competitive equestrian, was calling from Faraway Farm in Mount Olive, N.J., where she boards horses and keeps her own rescued Thoroughbreds, Denali, King and Fred. "I've always loved animals," she said.

She originally studied ornithology but shifted course when she realized the limited professional opportunities for bird specialists, and began working in pest control in the early 1990s. "It was really a good old boys' club," she said, interrupted by her whining Newfoundland puppy, Karina (named for the Bob Dylan song).

During the pandemic, Gordon said, the rats effectively took over New York. "This year there is a rodent population in places I've never had problems," she said, noting that buildings with pandemic-shuttered ground floor restaurants were as challenged as more publicized outdoor dining spaces, if not more so. "A restaurant closes and the rat has to get their food somewhere so they go up. A rat eats an ounce of food a day."

One client, she said, left a condo in Boca Raton, Fla., unoccupied during the first months of quarantine. When the owners returned, three dozen rats were living in the apartment with litters of baby rats nestled in their clothing drawers. The couple has since embarked on a gut renovation.

"Moths don't get as much attention as rodents," Gordon said, "but they should and they're definitely on the rise." (Climate change, she said, is also a factor; moths thrive in warmer weather.)

Lloyd Garten, president of Select Exterminating Co., which specializes in "high end residences" and businesses in Manhattan and Long Island, concurred. "We've seen a tremendous increase in clothing moth complaints in the last six months," Garten said. "Really, really dramatic, to the point that we have specialists running all over the city every day for moths, which wasn't always the case."

There are some 160,000 species of moths, though only a handful of those, in the Tineidae family, eat clothing. It is not the adult moth that munches the merino but the larvae: tiny caterpillars that feast on any keratin-based fibers but are particularly partial to wool and cashmere.

"The moths live to reproduce and make more eggs," said Gordon, who, like many moth battlers, uses synthetically produced female sex pheromone sticky traps to attract male moths and tries to avoid using pesticides, especially for the handful of major New York City museums that retain her (and which she charges on a sliding scale because she is a "big museum nerd" who grew up wandering the halls of the Carnegie Museum in Pittsburgh, where her mother was a docent).

Manny Guzman, chief executive officer of Pestrol Pest Management Services, is another specialist in high demand of late. "We have gotten not just increased complaints from tenants and consumers in their homes but also carpet businesses because their stores were closed," he said, noting that during covid many businesses cut pest control and cleaning costs. "Things get closed down, there's a lack of maintenance and pests increase, and now we're playing catch-up."

Over in Watertown, Conn., Heather Millette, owner of Millette Pest Control, said that "people are paying attention to areas they hadn't in the past. People who used to call when they were up for the summer about the ants now were realizing there was a lot more going on at the house. They were seeing more than a couple of rodent droppings on the weekend."

Millette, who runs the company with her husband and son, also pointed out that the quarantine craze for redecorating and renovating has unearthed dormant moth and pest problems. "People decided to redo their homes and found areas where the moths were underneath the ottoman or couch," she said.

The Millettes have added three staff members to their team of a dozen to meet the increased demand. "Unlike the restaurant business, covid kept us busy," she said. "We were considered an essential business and we were just that."

Certainly Rachelle Hruska MacPherson, 38, the designer of Lingua Franca, the cheeky line of cashmere featuring activist witticisms, can attest to just how essential.

"I had clothes that looked like rags," said MacPherson, who during the unseasonably chilly Memorial Day weekend combed through her closet in Montauk, N.Y., for the first time in months looking for a sweater to wear out to dinner at the Crow's Nest, the bayside inn and watering hole owned by her husband, Sean MacPherson. "I started pulling clothes out and I thought it was sand." She then realized it was frass, or larvae droppings, and the weblike silk that the caterpillars spin for their cocoons.

"Traumatizing," Rachelle MacPherson said. "I mean if it's little holes I can fix them, that's my business. In the cashmere ones they only made little holes but the wool looks like a web; it's destroyed." An oversize black and tan Adam Lippes caftan is beyond repair, as is a navy jumper by the Row.

Millette recommends storing items like rugs in climate-controlled areas of the house, avoiding humid attics or basements, which provide an ideal environment for a moth. "We are the biggest enemy to clothes moths," said Gordon, adding the easiest trick for moth deterrence is making sure every item in your closet gets taken out, shaken or worn.

When that is not an option, Guzman, of Pestrol Pest Management Services, advises keeping clothing that you don't wear frequently in proper sealed clothing bags or containers, the best being vacuum-sealed plastic bags if storing for a long period. (The clothes should be cleaned before storing.) The goal, he said, is to eliminate the moth's food source.

Things that can't be isolated, such as wool carpet, should be professionally cleaned twice a year and vacuumed consistently, making sure to get the underside of the carpet and the parts of it hidden under furniture.

"Pull that dresser off the carpet and clean!" Guzman said, describing a client who had the whole carpet cleaned except for a small section under the radiator that a wood frame had been built around. "The little buggers found this overlooked little area and that became an infestation."

Clothes should also be cleaned consistently. "Moths like a scent," Guzman said, "Something soiled. They love sweat." Sending your clothes to the dry cleaner is a fail safe -- if expensive -- way to kill moths. "Dry cleaning fluid kills all moths," Gordon said, but, she hastened to add, if you have moths, let your dry cleaner know so they can keep your pieces separate -- moth etiquette!

The moths, he said, prefer fine knits but "if you're all out of food and they're hungry, they can even feed off of dead skin." Horsehair, such as in your grandmother's mattress or stabilizing the plaster of prewar apartments, is also a buffet. "They really love it," said Guzman, who also described instances of dead rodents trapped in walls whose coats become moth feeding grounds. Bon appetit!

Speaking of Manhattan co-ops, the politics of moth mitigation can also be hairy there, as it were. Linda Gawley, a managing director for Charles H. Greenthal Management Corp., believes it is important for a building to pay for pest management rather than leave it to the individual tenant or shareholder, as many buildings do.

"One person's pest problem becomes everyone's pest problem," said Gawley, who fired one exterminating company after it set pheromone traps in the hallways, inadvertently drawing moths into the halls and then into neighboring apartments, and said neighbors have hurled accusations at one another.

"Old buildings are not a closed system," Gordon said, "In apartments, wall boards are major highways for something as small as an insect." Like the ascending rats, moths can travel up to three floors away. "They will explore!" 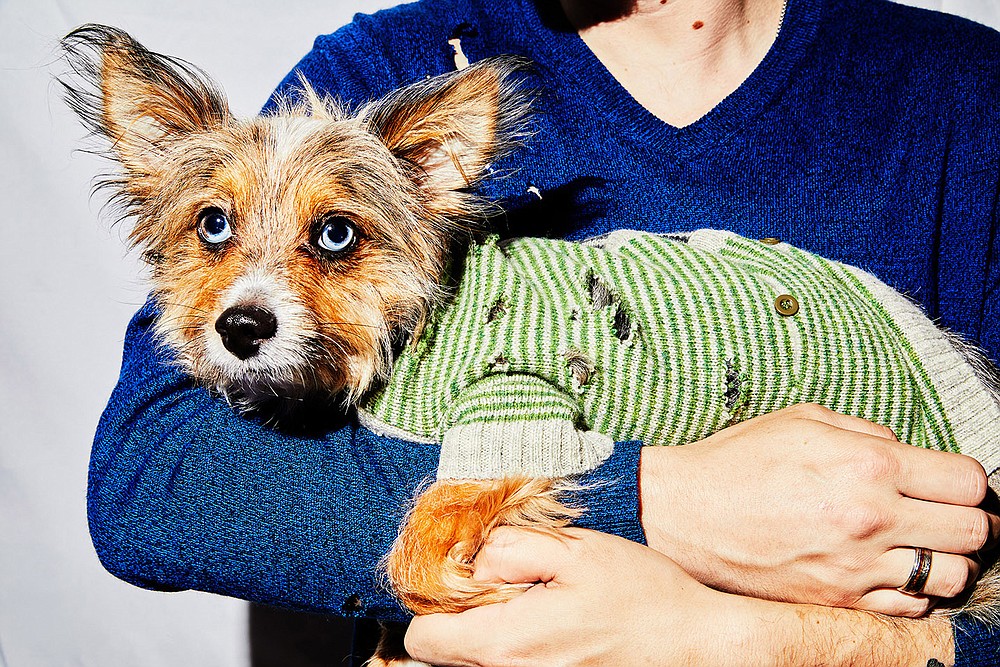 Print Headline: Moths have been partying in your closets