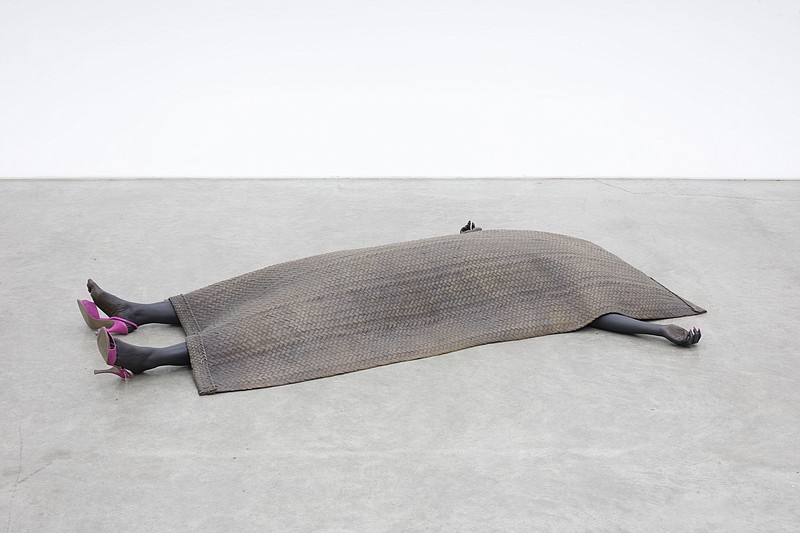 Wangechi Mutu’s “Shavasana II” is one of two sculptures of two Black women whose arms and legs stick out from the tarp that covers them. The artist says the works embody the continuing suffering of Black people around the world, especially women. (Courtesy of Wangechi Mutu and Gladstone Gallery Fine Arts Museums of San Francisco)

Half an hour after visiting Wangechi Mutu's exhibition at the Legion of Honor in San Francisco recently, I found myself driving down Haight Street, the headquarters of West Coast hippiedom. The two experiences combined, unbidden, into a vertiginous sensation of time travel. Mutu, I immediately decided, is a kind of hippie.

Or at least, her work, which makes use of materials like red soil, crystals, hair and shells, presents itself as a recognizable fusion of New Age cosmology, yoga, cross-cultural myth-mongering and feminist, Gaia-inspired environmentalism. It's also inspired (and this is perhaps where things get most interesting) by Afrofuturism. But more on that shortly.

Mutu is hot right now. Her sculptures were featured recently at the Metropolitan Museum of Art, where they inaugurated an annually changing commission to fill four niches on the museum's Fifth Avenue facade. There, her bronze female figures, adorned with mirrored discs, radiated composure and authority. They looked spectacular. Now, a wider selection of Mutu's work is disrupting the stately, self-confident galleries of European art in a show called "I Am Speaking, Are You Listening?" at the Legion of Honor.

Born in Nairobi, Mutu identifies as Kenyan American. She makes sculptures that conjure the talismanic powers of hybrid protector figures and reintroduce into the temples of Western civilization a heightened, holistic awareness of our animal and spiritual natures.

Some have been dramatically placed in the museum's open-air entrance court around a plinth holding Auguste Rodin's "The Thinker." (The suggestion that Rodin's great, mentally blocked nude — perhaps the ultimate visual representation, at least in the West, of the mind-body problem — might be confounded by the implications of Afrofuturism is briefly entertaining.)

Others are scattered among the museum's Old Master galleries and in the rooms displaying more of its celebrated Rodin collection. The presentation is rounded out by an intriguing short film and a handful of related mixed-media works on paper that, unfortunately, are not nearly as good as the playful collages Mutu made her name with in the early 2000s.

At a time when American museums are looking at their collections and recognizing their ongoing role in perpetuating sexist, colonialist and racist narratives, Mutu's interventions do much to encourage fresh thinking. Some of her sculptures are genuinely compelling. They transform human figures, usually feminine, into hybrid animal and vegetable forms, often with a futuristic or prosthetic look. Without seeming to emerge from any specific belief system, they are presented as guardian figures. 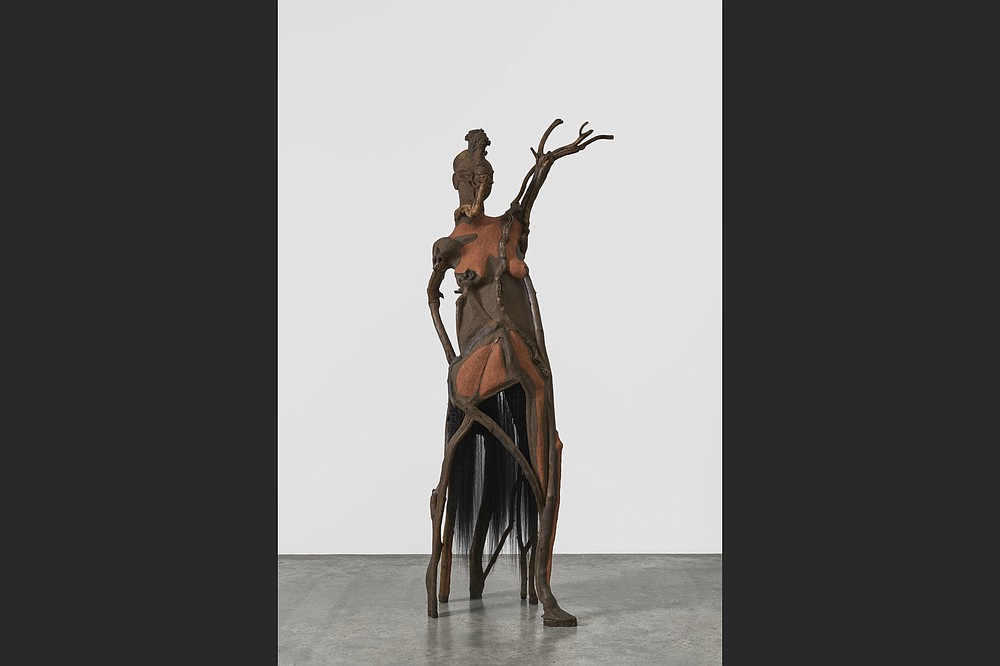 Overall, unfortunately, I felt the sculptures mostly fell short of the mark — formally and philosophically. In appearance, they alternate confusingly between, on the one hand, overly slick productions evoking a theme-park designer's idea of art and, on the other, the kind of clay-and-driftwood assemblages you might encounter in the backyard of a hippie commune. Cast in bronze, the slicker pieces have a machine-like finish to match their futuristic aura. The others, modeled from paper pulp, soil and wood, and adorned with hair, crystals and feathers, feel raw and organic. They aspire to look ancient, channeling cosmic powers, but tend to look more recently patched together.

The show's mildly accusatory title evokes an idea of conversation in jeopardy, and operates on a number of levels. It is based on a 2020 sculpture, "I Am Speaking, Can You Hear Me?," comprising two busts adorned all over with stylized scarification marks. One of the heads has, emerging from its cheek like a prosthetic appendage, an animal's jawbone (suggesting "speaking"); the other has a conch shell attached to the ear ("listening").

Mutu has said that the first conversation all of us have is with our mother, when we are still in utero. (In dedicating a recent talk she gave at the Legion of Honor to her mother, she said: "She sculpted me.") So the question, posed by speaker to listener, could be imagined as having to do with the passing on of wisdom from mother to daughter, or more broadly from one generation to the next. It could also, of course, be a question asked of any dominant culture by any oppressed, silenced or subjugated culture.

At the Legion of Honor, the conversation is between Mutu's sculptures and the Legion of Honor's permanent collection, and there are moments when it gets particularly interesting. Mutu's "Outstretched," for instance, a reimagining of the female nude, has been placed in front of a "Sleeping Venus" by Eustache Le Sueur, the French 17th-century painter. The skin of Le Sueur's goddess of love, attended by Cupid and stretched back against voluminous cushions in a pose suggesting muscle-tensing ecstasies, is soft and almost blindingly white. Mutu's dark gray, more decorously composed figure is covered in a kind of solid bubble armor and partially draped in cloth that seems continuous with her body. Her face and hands are covered in red and black feathers.

Echoing James Lovelock's Gaia hypothesis, which proposes that the Earth is a vast, self-regulating organism, Mutu said in her recent talk that the injustices humans commit against one another are inevitably related to the Earth. The pandemic, too, she suggested, arose in response to imbalances created by human greed and our squandering of the planet's resources. Much of her thinking chimes not only with the Gaia hypothesis but with ideas that feed into Afrofuturism, recently popularized in the movie "Black Panther."

The term Afrofuturism wasn't coined until 1993. It appeared in an essay, "Black to the Future," by the cultural critic Mark Dery. Reflecting on interviews with Black writers Greg Tate, Tricia Rose and Samuel R. Delany, Dery defined Afrofuturism as "speculative fiction that treats African-American themes ... in the context of 20th-century technoculture." These fictions, he wrote, employ "images of technology and a prosthetically enhanced future."

But like a lot of science fiction, Afrofuturism looks back as well as forward, and the term has been retrospectively applied to the music and myth making of the musicians Sun Ra, George Clinton and Jimi Hendrix, among others. 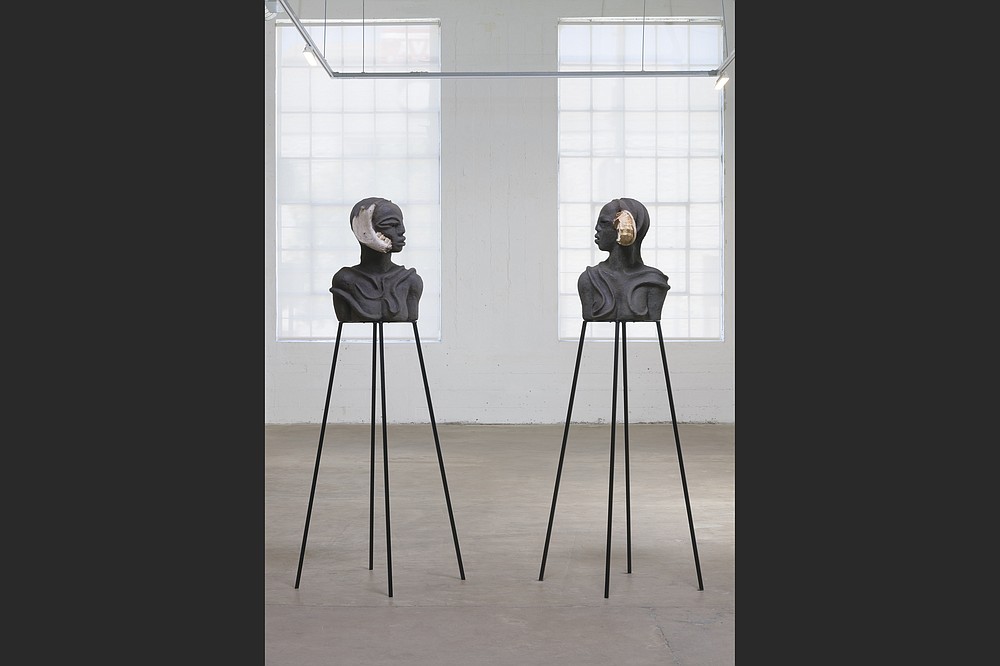 The sculpture “I Am Speaking, Can You Hear Me?” features two busts adorned all over with stylized scarification marks. (Courtesy of Wangechi Mutu and Vielmetter Los Angeles/Robert Wedemeyer)

BACK TO THE FUTURE

Like Mutu, I was born in 1972, at the morally exhausted end of the hippie heyday. Cruising down Haight in a blur of tie-dye-smattered storefronts after seeing Mutu's show, I found myself contemplating the relationship between Afrofuturism and 1960s counterculture.

Perhaps the main link is the apprehension that certain things have gone deeply and terribly wrong, and that therefore some big-time, cosmic healing is called for. In Afrofuturism's case, the original sin is slavery, a trauma so ineradicable that it can only be "overcome" by imagining some totally alternate, time-bending narrative involving a vibranium-depositing meteorite. In American hippie culture, the original sins were war, environmental degradation (hence free love and flowers) and, again, slavery (hence the counterculture's links with the civil rights movement).

Mutu's work draws on aspects of all of this. Aesthetically, it suffers only from a kind of extraterrestrial vagueness. Its forms emerge out of a moral and intellectual atmosphere that too often resembles fog. Her works are individually impressive, but they lack the specificity, the definition, the urgency of the very best art.

Still, at 49, Mutu is probably just getting started. Her obvious ambition and her rapid, restless development suggest she will be worth watching for years to come.

"Wangechi Mutu: I Am Speaking, Are You Listening?" is at the Legion of Honor in San Francisco through Nov. 7. For more information visit legionofhonor.famsf.org.