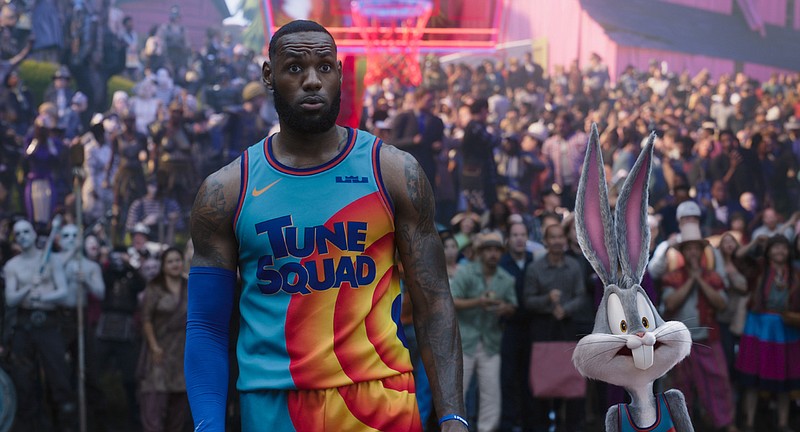 Lebron James and Bugs Bunny star in Warner Bros.’ animated/live-action adventure “Space Jam: A New Legacy,” which came in at No. 1 with $31.7 million last weekend.

The Warner Bros. picture starring Los Angeles Lakers great LeBron James made an estimated $31.7 million in sales in weekend opening, higher than the industry expectation of $26.4 million, according to researcher Comscore Inc. On Saturday, James tweeted "Hi Haters" as he shared the box office result.

It's also the largest domestic opening for a family film since the beginning of the pandemic. Warner Bros. said 32% of the audience was under 18, which is larger than usual. Most of the major family films that have come out during the pandemic -- from "The Boss Baby: Family Business" to "Raya and the Last Dragon" -- have opened well under $20 million. But audiences of all ages turned out for the new "Space Jam."

"It shows that families have waited for a movie that everyone can go to and that's this movie," said Jeff Goldstein, Warner Bros.' head of domestic distribution. "It's just a fun movie for the family."

"Black Widow," the latest superhero film from Walt Disney Co.'s Marvel franchise, saw ticket sales sliding about 67% to $26.3 million. The large second-week drop suggests that some movie fans are still reluctant to head back to theaters.

Studios and cinema owners were hoping "Black Widow" would jump-start a resurgence in moviegoing, with film-starved fans pouring back into theaters after a year and a half away. The film generated $80 million in domestic ticket sales in its debut July 9, the best performance yet for a new movie during the pandemic.

But "Black Widow" and "Space Jam" are also available online, which cuts into box-office revenue. Disney said it sold $60 million worth of streaming access to the film July 9, the first time it has disclosed such a number. "Black Widow" has taken in $264 million in theaters globally to date.

"Ultimately, I think the industry is still in the middle of a protracted recovery process that we've warned could take many months and extend past the summer," said Shawn Robbins, chief analyst at Boxoffice Pro.

Both movies, despite standing above their box-office competitors, have fallen short of some expectations. "Black Widow" was forecast to generate more than $90 million in its domestic debut. "Space Jam" -- a new installment of the 1996 Michael Jordan movie, which became a pop-culture mainstay -- also didn't outperform its predecessor. Twenty-five years ago, the first "Space Jam" film generated $27.5 million in its opening weekend, about double that of the new film when adjusted for inflation.

Theaters are struggling to cope with an unpredictable pandemic, which has gone through periods of easing before roaring back. They're also facing an uphill battle against customers seeking more convenience -- including being able to see popular new titles in their living rooms right away.

While about 82% of movie theaters in North America are now open, year-to-date box-office receipts are still 30% weaker than in 2020, according to data from Comscore Inc. The weekend's top 10 grossing films in theaters are set to generate about 28% less than they did the weekend before.

When it comes to home viewing, "Space Jam" is free for customers of AT&T Inc.'s HBO Max streaming platform. "Black Widow" has been available on the Disney+ service for an additional $30 fee. Disney didn't publish streaming revenue figures this weekend.

Columbia Pictures' "Escape Room: Tournament of Champions," meanwhile, took the No. 3 spot last weekend. The film, a $15 million horror flick based on the popular in-person experience, is set to generate $8.8 million worth of North American ticket sales in its first weekend. The film is a sequel to the high-concept 2019 film, "Escape Room."

"F9" took fourth place with $7.6 million. The "Fast & Furious" film has made $591.2 million globally to date. The fifth and sixth place spots also went to Universal films: "The Boss Baby: Family Business" with $4.7 million and "The Forever Purge," with $4.1 million.

"A Quiet Place Part II," which recently became available on Paramount+, is still doing good numbers into its eighth week in theaters. It added another $2.3 million, bringing its domestic total to $155 million.

The Anthony Bourdain documentary "Roadrunner" also did well last weekend, grossing around $1.9 million from 925 theaters, making it the top grossing specialty debut of the year.