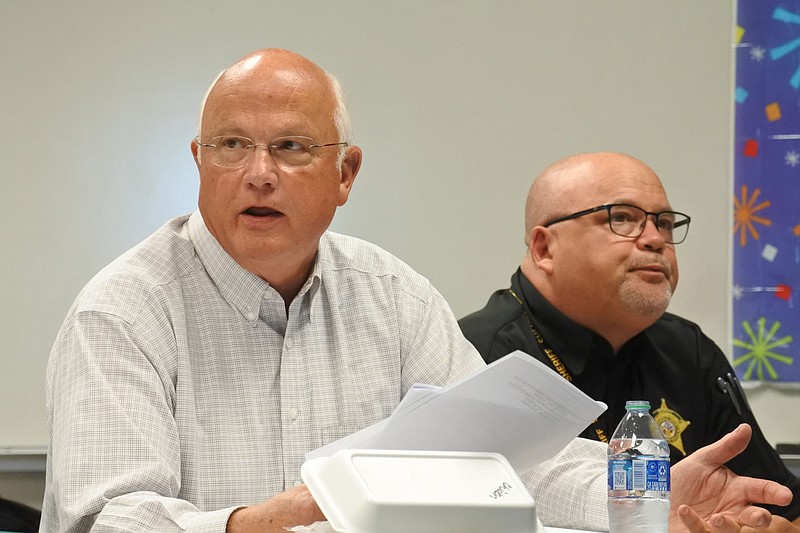 FORT SMITH -- A Sebastian County panel will start paring down recommendations to figure out what's next in an ongoing assessment of the county's criminal justice system and jail needs.

The members of the Sebastian County Criminal Justice Coordinating Committee decided Thursday to go through the assessment's list of programs, policies and procedures on their own. They will send those they believe the board should consider trying to implement to Drew Smith, Sebastian County criminal justice coordinator, who will compile them into a targeted list they can review and act on during the next meeting in August.

The Quorum Court established the committee in August 2017 to find ways to reduce the jail population and improve the justice system.

County Judge David Hudson said the purpose of the assessment is to evaluate justice system policies, procedures and programs and their impact on how many jail beds are needed. The evaluation will help determine how many pretrial misdemeanor and felon beds are necessary in the jail, with the assessment at large being meant to help decision-makers establish a clearly defined, comprehensive plan for justice system operation and the jail.

"The jail is a beneficiary of whatever happens in the justice system," Hudson said.

Hudson said the leadership in the criminal justice system, including the judges, prosecutor, public defender, sheriff and all city police departments, has to embrace the plan for it to succeed. The system hasn't had an assessment of jail beds since 1989.

Hudson provided the committee with a history of the assessment Thursday. He said the Quorum Court approved the current contract for it, which involves the architecture firm TreanorHL, Studio 6 Architects and criminal justice planning consultants Mark Goldman and Associates, in 2018.

A report was presented to the Quorum Court in October 2016 detailing an evaluation of the jail made by an architect and a mechanical engineer to see what it needed to have to continue to function appropriately, according to Hudson. The report estimated the improvements needed at the aging facility would cost about $5 million, and it would be feasible to expand the facility to include up to 160 more beds for about $7 million. However, no action was taken.

The current assessment states the jail will need 153 more beds if no changes are made to the Sebastian County criminal justice system.

"We do not have the money to pay for 153 more beds to be added to the jail," Hudson said.

The jail was built for 260 beds in 1994, according to Hudson. Of those beds 77, or 30%, were allocated for Arkansas Department of Corrections inmates. An expansion in 2007 increased the number to 356 beds, with another 40 being set aside for U.S. Marshals Service inmates to provide money for increased operating costs. Thirty percent of 356 comes out to 106 beds for Arkansas Department of Corrections inmates.

"That is a big deal," Hudson said. "That is a big financial deal from my perspective. And I don't think it's sustainable to keep putting more of our unobligated general fund money and sales tax money into any kind of expansion to the jail."

Sheriff Hobe Runion said even if the jail population was kept at 356, there would still be inmates who would have to sleep on mats on the floor of the jail due to the need to separate certain types of inmates. Although Runion believes the committee needs to look at other programs, policies and procedures, he voiced his concern that, despite the effort the committee has put in and the success its seen, the federal government may intervene if something isn't done to address the issues.

"In the long term, I think we do need more beds," Runion said. "I don't think that's a question. I think most everyone involved believes that to some degree."

Hudson said a federal judge oversaw the operation of the previous Sebastian County jail from 1982 until the current jail was opened in 1994. Runion said this happened as the result of a lawsuit.

The Sebastian County Jail had a total population of 379 inmates as of Thursday morning.