Residents of Bentonville subdivisions worry about impact of widening Arkansas 112 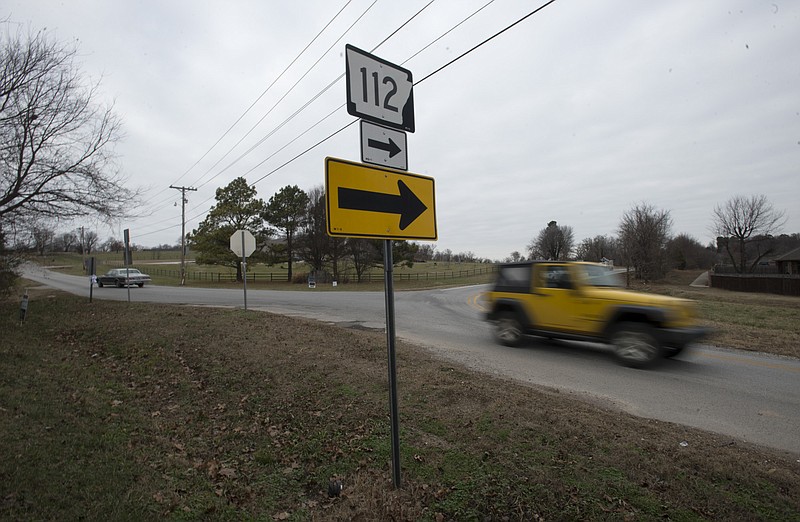 FILE -- Cars drive by on Thursday, December 28, 2017 on the corner of AR-112 and Howard Nickell Road in Fayetteville. (NWA Democrat-Gazette/CHARLIE KAIJO)

State highway officials have removed the most controversial route for improvements and widening of Arkansas 112 to four lanes in Bentonville but, residents of the area said Thursday evening they still have concerns about flooding and the proximity of the road to their homes hurting property values and putting their children at risk.

Kevin Beaumont said he was concerned about the amount of stormwater that already runs through a low lying area east of St. Valery.

"It's very significant even tough that's not a water course that is identified on any state maps," Beaumont said. "There is a tremendous amount of floodwater that comes down there through what is a designated wetlands area, which would pose environmental concerns."

John Jouvrenaux was also concerned about flooding in the area and the feasibility of bridging the area.

"Where that Cook Road property ends down there, there's a massive amount of creek beds that are there for drainage and they would have to build a long and very elevated bridge system to get across that area," Jouvrenaux said. "The fact that I have cows down there, I'm very aware of how deep those ditches are and how much water runs through there."

Jouvrenaux and several other residents ask why the road could not be moved west of the proposed route or west of the subdivisions altogether.

Mike Burns, with Crafton Tull, the engineers hired to do the design and environmental work, said shifting the route slightly would impact more landowners and the current proposed route is the most cost-efficient.

Mark Williams, an area resident, said most of the traffic in the area is going and coming from those schools.

"I think that the thing you totally don't get on your side of it that all that traffic is the schoolchildren," Williams said. "If you don't give them an easy way to get to their schools you're going to have more bottlenecks and traffic congestion that you didn't foresee. So, you actually want to enable that route."

Williams said he is also concerned about the environmental impact of increased water runoff on the Cave Springs recharge area, which is home to cave fish and other sensitive creatures.

Several residents said Ozark Acres subdivision already has issues with flooding and the road work will make flooding worse, causing residents to have to spend more money to address the issue.

Other concerns were over decreased property values, traffic speeds, noise, septic and sewer concerns, utility easements and how the median and sides of the road will be maintained. One resident said he felt like resident's feedback "goes into a black hole."

The comments came at the last of three public input session held for the project this week. The sessions were designed to allow residents to see what changes the Arkansas Department of Transportation made after receiving their comments in December.

Thursday's session covered a 3.99-mile portion of Arkansas 112 between West Wallis Road and Arkansas 12. The department also extended the work to up to 41st Street at the request of Bentonville city officials. The section goes through portions of Cave Springs, Rogers and Bentonville.

Construction is not expected until 2024 and is expected to take two to three years.

Making Arkansas 112 a major north/south connection in coming years is part of the regional Transportation Improvement Program for Northwest Arkansas. The road envisioned would be four lanes divided by a raised median and would have sidewalks on either side. There would be breaks about every quarter mile.

Regional planners in January 2019 agreed to move forward with a vision for Arkansas 112 as a four-lane, north/south corridor with managed access. The Arkansas Department of Transportation is ultimately responsible for doing the work.

The primary purpose of the improvements is to allow the road to carry significant local and regional traffic, according to the planning documents. Arkansas 112 is the only major north/south route through the metro region west of Interstate 49, which makes it critical for regional mobility as the area continues to grow, according to the document. The region's population is projected to be close to 1 million by 2045.

In case you missed it

The Arkansas Department of Transportation held three virtual public input sessions this week for the Arkansas 112 widening projects between U.S. 412 and Arkansas 12. The meetings were recorded and will be available on the highway department’s website.

The website will be available for viewing through Aug. 6 at https://www.ardot.gov/publicmeetings. Comments will be accepted until 4:30 p.m. Aug. 6. For additional questions, contact: Karla Simms, Advanced Public Involvement Specialist,