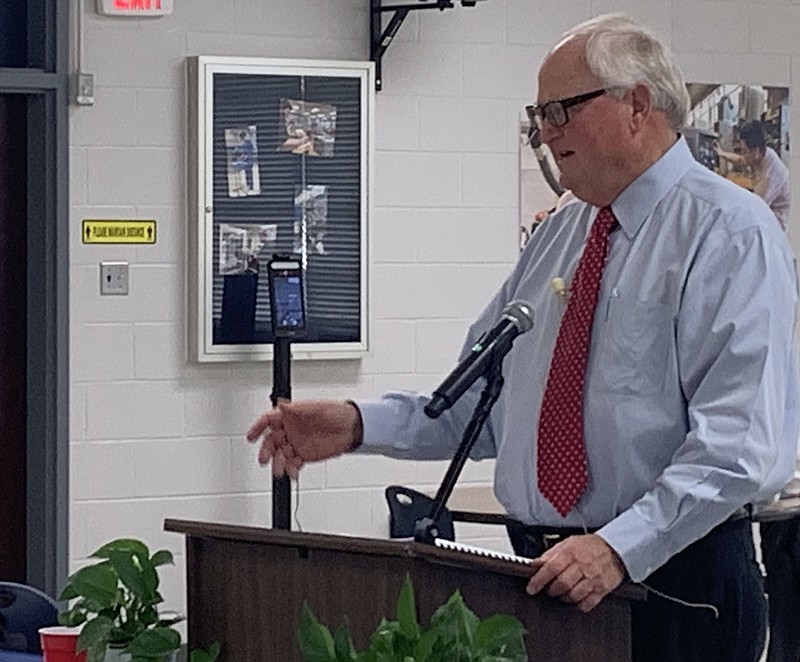 Jim Rollins, Northwest Technical Institute president, discusses hoped for increases in enrollment for the 2021-22 school year Thursday at a Board of Directors meeting. (NWA Democrat-Gazette/Mary Jordan)

The Board of Directors on Thursday voted 3-0 in support of the increase. Board members Anthony Doss and Kelly Johnson were absent.

The increase will bump tuition from $60 to $66 per credit hour, said Melissa Greenslade, student service director. The increase is necessary because of rising operational costs for almost all services and supplies, she said.

The institute implemented a $5 increase per credit hour last school year. That increase was the school's first in five years, Greenslade said.

The tuition increase comes as the institute is seeking to grow its enrollment by hundreds of students. The school historically has had an enrollment of 1,200 to 1,300 annually, but administrators said they hope to increase enrollment to as much as 2,000 this fall.

The 16-week program will focus mainly on residential construction and will cover topics such as carpentry, masonry, concrete finishing, electrical work and plumbing. It will cost about $1,800 to complete, Eason said.

The school likewise will offer a new business track for people looking to get into the business field or seeking professional development opportunities, she said. Costs for completing the program are still being developed, Eason said. Classes begin Sept. 2.

Classes will vary from three weeks to three months and will focus on topics such as human resources, accounting and office management.

As many as 60 students will have an opportunity to participate in the program its first year, Eason said.

The program will offer industry-recognized certifications, to include the Excel spreadsheet program, according to Greenslade.

"We are still working on some of the certifications now, but we know that industry is looking for workers in payroll, medical office assistants and Excel gurus," Eason said.

The institute will also offer a commercial driver's license training program for 200 students annually beginning Sept. 15, Eason said. Ten cohorts of 20 students will have an opportunity to participate in the four-week training sessions annually.

Students who successfully complete the training and drivers test will receive a commercial driver's license allowing them to drive professionally across the country, Dewberry said. This is the first time the institute has offered its own commercial driver's license training since the 1980s; Mid-America Truck Driving School is currently offering the training and will end instruction at the institute the first week of September, Dewberry said.

"We are wanting to provide a broader and more comprehensive training program of study to meet the need of the regional trucking industry," he said of why the institute will be conducting the training in the future.

Additional increases in enrollment will result from continued emphasis on the institute's current offerings, he said.

In other news, Rollins announced Carlos Chicas, board member, completed a five-year term on the board in June and was appointed by Gov. Asa Hutchinson this month for another five years.

Greenslade also introduced Gretchen Sawyer as the institute's new communications director. Sawyer said she's been with the institute for five years and previously worked in support of recruiting and advising.

"I'm really excited about it," Sawyer said of the newly created position. "It's a very needed component of our school and helping the community understand what we offer."

The institute will pay Sawyer about $50,000 annually for the position, she said.

The Northwest Technical Institute Board of Directors will be moving from a monthly to a quarterly meeting schedule.

Future meetings are scheduled for 11:30 a.m. the third Thursday of September, December, March and June.