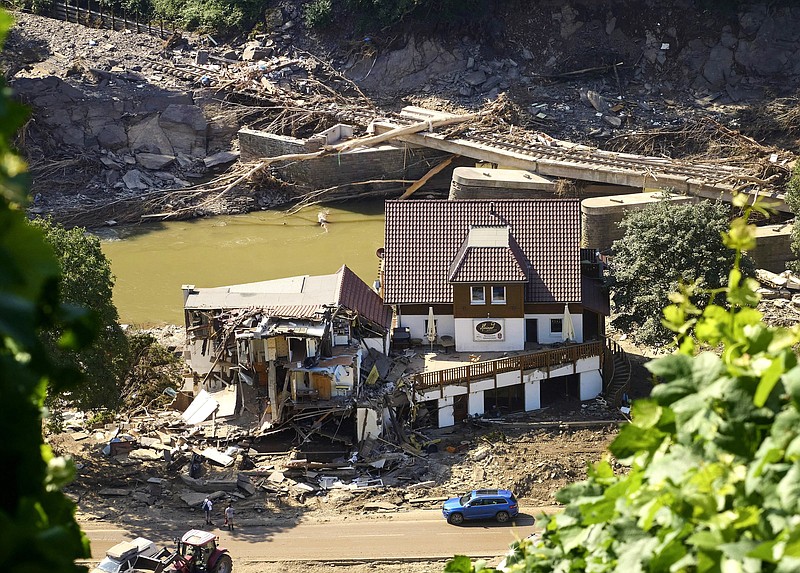 A house and the bridge behind it sit in ruin Wednesday after flooding in Marienthal, Germany. (AP/Thomas Frey)

BERLIN — Germany’s Cabinet approved Wednesday a roughly $472 million package of immediate aid for flood victims and vowed to start quickly on rebuilding devastated areas, a task expected to cost well into the billions.

Finance Minister Olaf Scholz said the package, financed half by Chancellor Angela Merkel’s federal government and half by Germany’s state governments, to help people deal with the immediate aftermath of last week’s flooding would increase if more money is needed.

“We will do what is necessary to help everyone as quickly as possible,” Scholz said.

At least 171 people were killed in Germany, well over half of them in Ahrweiler county, near Bonn, when small rivers swelled quickly into raging torrents after persistent downpours. Another 31 died in neighboring Belgium, bringing the death toll in both countries to 202.

The deluges also destroyed or severely damaged homes, businesses and infrastructure. Authorities in the affected states are responsible for details of who receives how much aid and how, but Scholz said they have indicated it will be “a very unbureaucratic process” that involves no means-testing.

“It’s necessary to send a message quickly that there is a future, that we are taking care of it together, that this is a matter for us as the whole country to help with,” he added.

DUBAI, United Arab Emirates — An Iranian police officer and another person have been killed in ongoing demonstrations over water shortages in the country’s southwest, state media outlets reported Wednesday, raising the death toll so far in the unrest to at least three.

According to the state-run IRNA news agency, gunfire killed one officer in the city of Mahshar, and another suffered a gunshot wound in the leg.

The report blamed “rioters” for the killing, without elaborating. Iranian state television reported later Wednesday that a “citizen” had been killed in the demonstrations in the town of Izeh, without providing details. Another 14 police officers suffered injuries in the unrest, the TV report said.

A third man was killed earlier in the protests, according to Iranian media reports. Iran has in the past blamed demonstrators for deaths occurring during heavy-handed crackdowns by security forces.

There have been six days of continuous protests in Iran’s oil-rich Khuzestan province, home to ethnic Arabs who complain of discrimination by Iran’s Shiite theocracy.

State Department spokesman Ned Price told reporters that the U.S. was following closely reports that Iranian security forces fired on protesters. “We support the rights of Iranians to peacefully assemble and express themselves …. without fear of violence, without fear of arbitrary detention by security forces,” he said.

Water worries in the past have sent angry demonstrators into the streets in Iran. The country has faced rolling blackouts for weeks now, in part over what authorities describe as a severe drought. Precipitation has decreased by almost half in the last year, leaving dams with dwindling water supplies.

LAGOS, Nigeria — Gunmen in northwest Nigeria have released 100 kidnapped victims, many of them nursing mothers and children, who had been held captive for about six weeks.

Police spokesman in Zamfara state, Mohammed Shehu, said Wednesday that the victims had been abducted from Manawa village on June 8.

The government “successfully secured the unconditional release of the victims” without paying any ransom, he said.

Armed gangs operate in Zamfara and other states in northwestern and north-central Nigeria.

The bandits who normally kidnap for ransom are blamed for the recent spate of mass abductions of schoolchildren in northern Nigeria.

About 800 children have been abducted from their schools since February, when 27 boys and some teachers were taken from a college in Kagara, in Niger state.

The most recent incident of mass abductions occurred July 5, when 120 students were taken from the Bethel Baptist High School in Kaduna. Those children are still being held.

MOSCOW — Russia launched on Wednesday a long-delayed lab module for the International Space Station that is intended to provide more room for scientific experiments and space for the crew.

A Proton-M booster rocket carrying the Nauka module lifted off as scheduled at 7:58 p.m. local time from the Russian space launch facility in Baikonur, Kazakhstan. The navigational antennas and solar arrays deployed properly after a flawless launch that set the module on an eight-day journey to the orbiting outpost.

After a series of maneuvers, the 22-ton module is set to dock at the station in automatic mode July 29.

The launch of Nauka, also called the Multipurpose Laboratory Module, had been repeatedly delayed because of technical problems. It was initially scheduled to go up in 2007. 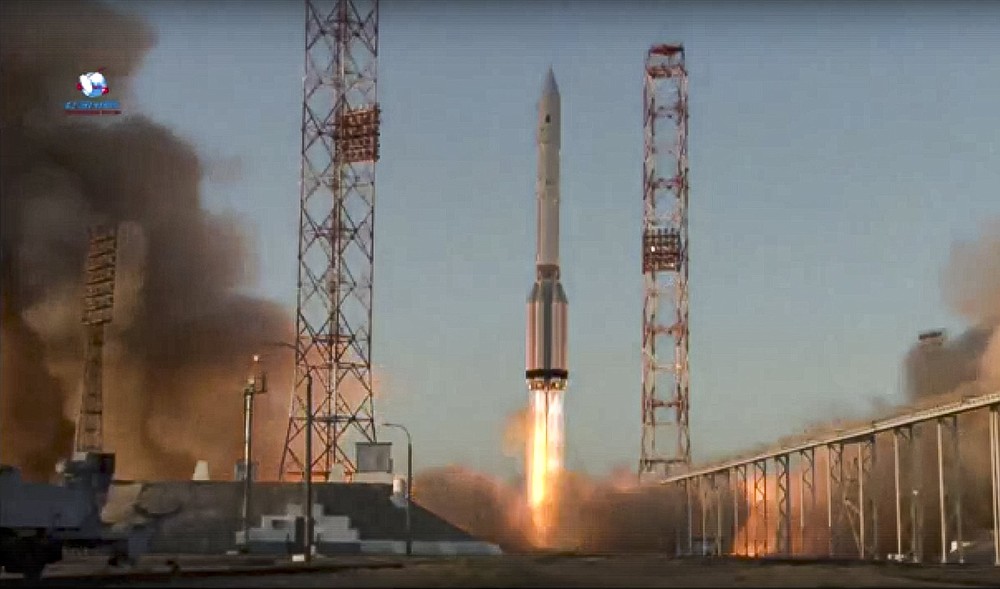