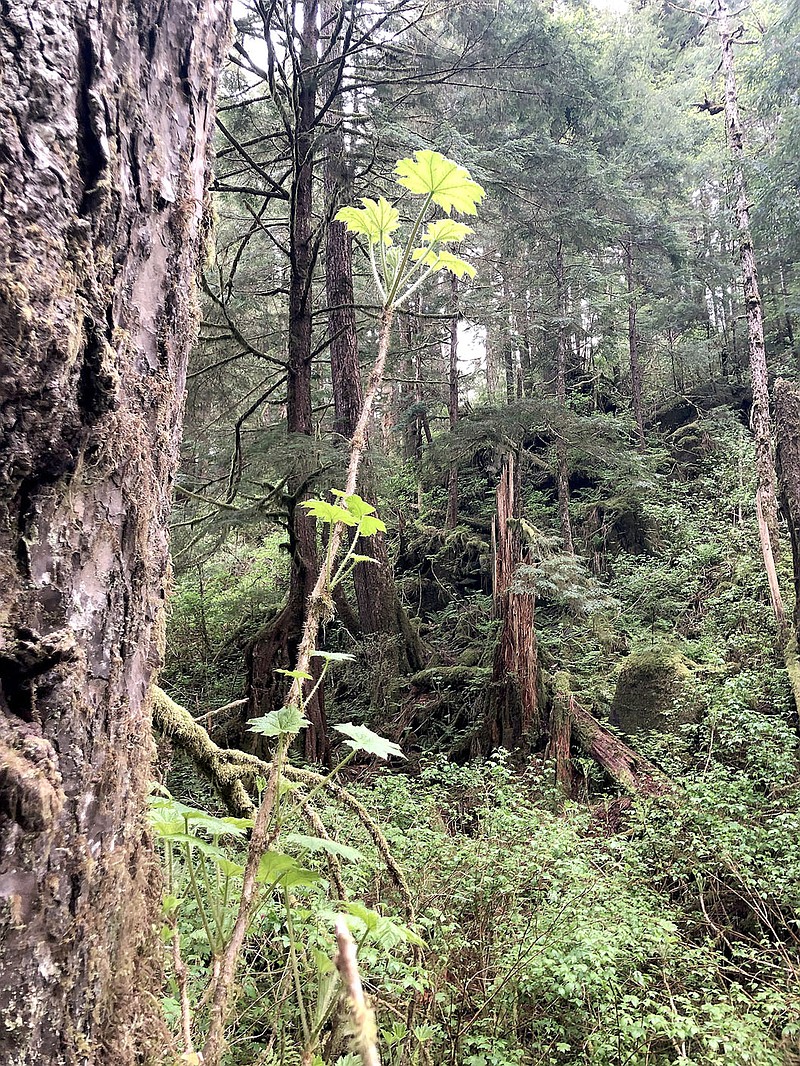 The forest of Ketchikan, Alaska.

Editor's Note: Denise Nemec, a freelance writer for the Enterprise-Leader, shares with our readers what she experienced on a recent trip to Alaska.

The Last Frontier, Alaska's claim for itself, faced us in a fierce black wolf, a sharp-eyed eagle and a shaggy mountain goat, all perfectly taxidermied and displayed in individual glass cases scattered around a compact, but fully equipped Ketchikan International Airport.

Our friend Sally, on contract until early fall as a nurse practitioner for the Alaska Public Health Department, told us if we wanted a free place to stay, we'd better get off our keisters and take some action.

This February, once it was certain covid-19 vaccinations were available and attainable, we did. We decided to visit in May, several months after we'd all been fully vaccinated.

My friend, Gail, from Oregon, and I, a Fayetteville resident, met up in the SEA-TAC International Airport May 14 and flew that evening on Alaska Air into Ketchikan, arriving at 8 p.m. ATZ (Alaska Time Zone), three hours behind Central.

Even after a full day of travel on three planes, Alaska's clean air and my excitement at being with good friends kept me wide awake and alert. Besides, there were still several hours of daylight to enjoy because sunset arrives a little later up thataway.

After gawking at the stuffed critters and native art in the airport, we gathered our luggage and stepped outside. The airport is on small Gravina Island across Tongass Narrows from Ketchikan, the only true town on Revillagigedo Island. Like in a Richard Scarry kid's book, we debarked from an airplane, climbed into a car and drove onto a ferry boat.

Philosophers talk about each person being an island, but when faced with an "End" of road sign and no physical connection to another land mass, the concept strikes a harder, more sobering chord. I consider that my first lesson: Alaska is called the last frontier for good reasons.

This also makes travel between islands expensive. Getting around isn't as simple as hopping in the car and cruising. We in the south, the word used by native Alaskans for the contiguous 48 states, are utterly spoiled in that way. It cost $32 round trip for Sally to come across on the ferry to the airport in her car and then take us back to Ketchikan. Those who walk onto the ferry to get to cars they've left in the parking lot on the Ketchikan side paid just under $7.

At the time of our visit, cruise ships had not yet been released from covid-19 restrictions to ply the Alaska Marine Highway, also called the Inside Passage. While bad for Ketchikan, which relies heavily on tourism, it ended up being a boon for us.

From our perch in Sally's home, about five streets up the mountain above the main drag, Highway 7, aka Tongass Highway, we had a bird's eye view south of channel comings and goings.

We daily watched eagles, ravens, hawks, seagulls, terns and other birds soaring, roosting and fishing. Float planes took off and landed from a dock along Tongass Narrows straight down the mountainside from her home, and Alaska Air and other planes soared by at eye level. We saw three Ospreys, their top rotors creating a distinctly different beat on the surrounding mountain sides, and helicopters flitted back and forth, some with shipping containers dangling at the end of long cables.

It's hard to say how many kinds of boats we saw, but among them were fishing boats, speed boats, tugboats, sailboats, yachts and, of course, ferries of different sizes. We even saw a kayak, paddle ends flashing in the sun.

Here's a lodging tip if you decide to visit Ketchikan sans cruise line: Find an AirBNB or a VRBO high up on the hillside with lots of windows overlooking Tongass Narrows. Hotels cluster along the waterway, but the views higher up make the many, many stairs worth the climb.

And that was the second lesson I learned: Asphalt singles and rolls are the ultimate traction on wet, wooden stair treads and decking. Take heed, lake dwellers and owners of rentals. Haul out that extra bundle of shingles taking up space in the garage or wherever, and nail them onto decks and stairs for the ultimate in secure footing.

Southeast Alaska is a combination of islands and mostly uninhabited forests and fjords that share a border with Canada. Tongass National Forest, the largest in the U.S., is a temperate rainforest, with an average rainfall of up to 172 inches, according to John Hamilton's book Alaska: The Last Frontier. Called Alaska's panhandle, Southeast Alaska is somewhat different from the larger land mass typically associated with the state. The panhandle is also home of the state's capital, Juneau, the town of Skagway, and Glacier Bay National Park, which cruise ship folks say is a stunning sight. I'll have to take their word on it though. Maybe next time I'm up that way.

Alaska, the whole state, is huge. One t-shirt displayed Alaska and to-scale Texas side by side with the line, "Isn't Texas cute?"

Our activities during our full eight days there took in local areas, including Ketchikan town, beaches and trails accessible by car, and a couple of nights' stay at a friend's home near Hollis on Prince of Wales Island.

Turns out Ketchikan was under a covid-19 high alert after an infection spike, and a lot of the town was shut down during much of our visit, including museums, the library and historical sites. However, we found plenty to do, and we'd already planned to do a lot of our own cooking.

I guess you could say we got an insider's look into the place. We had a fine time visiting thrift stores, the few shops that were open, Safeway and ANP grocery stores, beaches, trails and, can you guess? Walmart. We were in the United States of America, after all.

Thrift shops, you say? Yes, oh, yes. The Rendezvous and the Salvation Army Thrift Store were our go-to places. In fact, in the Rendezvous, I found a pink zip-up hoodie with "Ketchikan Alaska" in glittery print across the chest. I wore it almost every day I was there, after washing it, of course.

Most of what we did was outdoors, excepting the thrift stores. We walked through stunning Totem Bight State Historical Park after a picnic, gaped at snow-capped Deer Mountain rising above Ketchikan, admired totem poles scattered around downtown, collected shells and looked at kelp at Refuge Cove, walked around Ward Lake in the red cedar and Sitka pine forest, drove through sadly dilapidated Saxman Totem Park, sunbathed at Rotary Park (called Bugges Beach by residents, pronounced Buggy), trod Creek Street boardwalks and sat for long periods of time with cups of coffee looking out Sally's windows.

We didn't see salmon leaping up Creek Street Creek because we were there too early in the season. Nor did we see any whales or bears even though we heard about others seeing them. A Facebook group called Whale Spotters Ketchikan posted several videos of killer and humpback whale sightings during our stay.

We weren't in the right places at the right times, but our time there was magnificent all the same. All around us were snow-capped mountains and the waters of the Pacific Ocean. Also, the odd-looking Western skunk cabbage was shooting up its banana-shaped and colored stalk-like flower, and salmonberry bushes in full flower were everywhere. By mid-summer, they'll be laden with salmonberries, which are loved by bears and humans alike.

Perhaps the highlight of our trip was the Inter-Island Ferry ride to Prince of Wales Island to the tune of $350 round trip for the car and three passengers. Cars are parked in the hull, and comfortable seating and a full restaurant are up top. Views of snow-capped mountains, open water, birds and forests slid by as we whiled away the time.

In the comfort of the ferry, my thoughts turned to the thousands of prospectors who came north seeking their fortunes during the 1896 Klondike gold rush, which was actually in the Yukon Territory of Canada. They endured hardships beyond belief, not the least of which was arduous travel, and in many ways, they are the ones who opened up this frontier to the world. As stated in Fodor's Travel Alaska guidebook, perhaps if the prospectors had "known their geography, Alaska would never have become the state that it is now."

Once on the island, we drove to Colleen's home. Colleen is an experienced and talented weaver of cedar. She strips the wood from felled cedar trees, then makes bracelets as well as baskets, hats and whimsical and fine art. Her home had all the comforts and was spacious enough, like Sally's home, for each of us to have our own room.

The next day, we drove past Klawock Lake to Craig, one of the towns on the island and visited several shops that featured art made by native Alaskans. After supporting local art, we drove back to Colleen's for the party she'd planned. In addition to her cedar weavings, she is an exceptional cook from her catering days. Her neighbors came over and joined us for rockfish tacos. We played croquet and visited around a fragrant fire until dark, the deep forest surrounding us and Colleen's chickens muttering softly from their coop.

The ferry back to Ketchikan required us to be in line to board at 7 a.m. and, once again, the three-hour ride offered time to read, nap and watch for whales.

On our last day in Ketchikan, Saturday, May 22, we decided to eat out for only the second time. Sally had raved about the salmon crepes at the Alaska Crepe Co. restaurant, and it had finally opened after being shut down due to the aforementioned covid-19 spike.

This is when I learned a few more lessons:

Sunday, the tenth day of our trip, Sally took us at 6 a.m. in her car on the ferry across Tongass Narrows, and Gail and I boarded Alaska Air flight #60 to head south. In SEA-TAC, Gail and I had lunch, then parted toward our separate gates. Our vaccines kept us safe, and Sally gave us a safe, comfortable aerie from which to experience a new place, a place that felt both familiar and foreign. 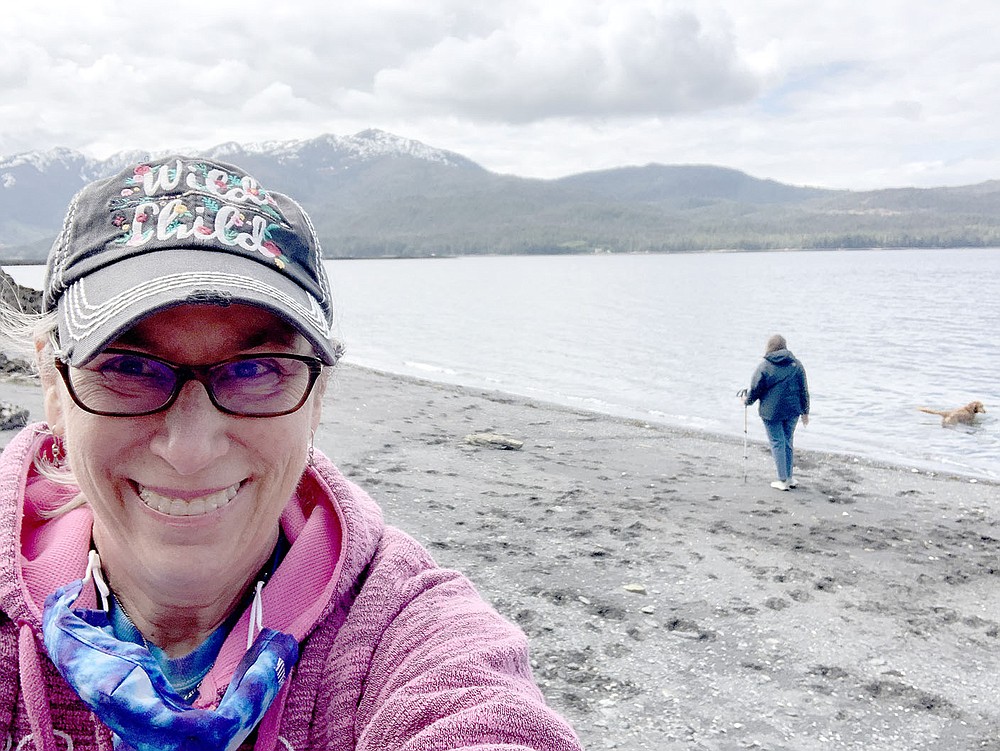 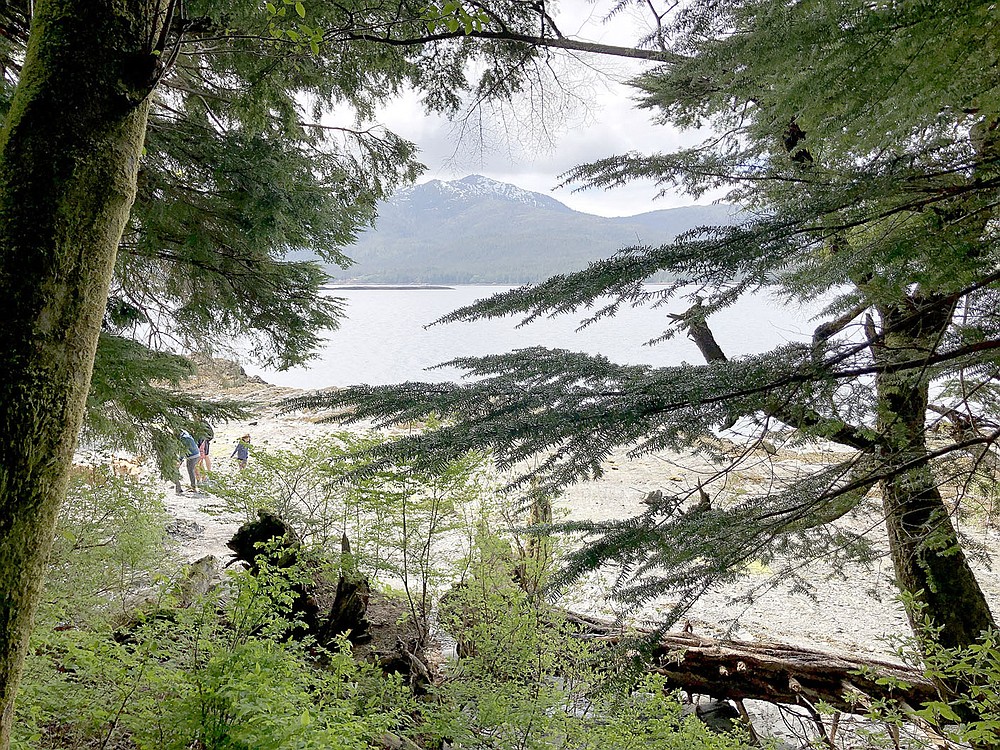 PHOTOS BY DENISE NEMEC SPECIAL TO ENTERPRISE-LEADER A view of Refuge Cove and snow-capped mountains outside Ketchikan, Alaska. 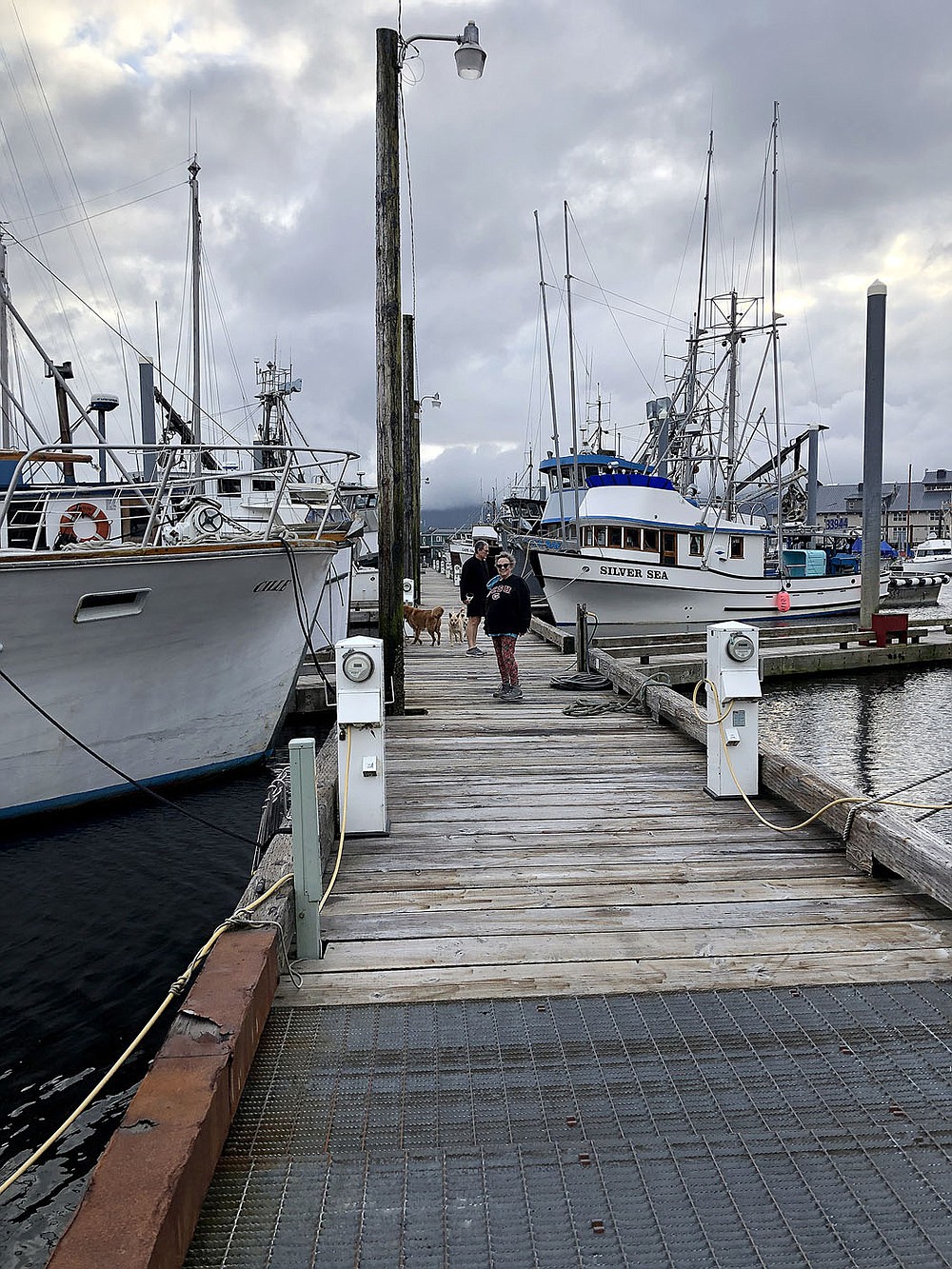 Our host Sally Grace, her friend Bob, and the dogs walk along Ketchikan harbor. 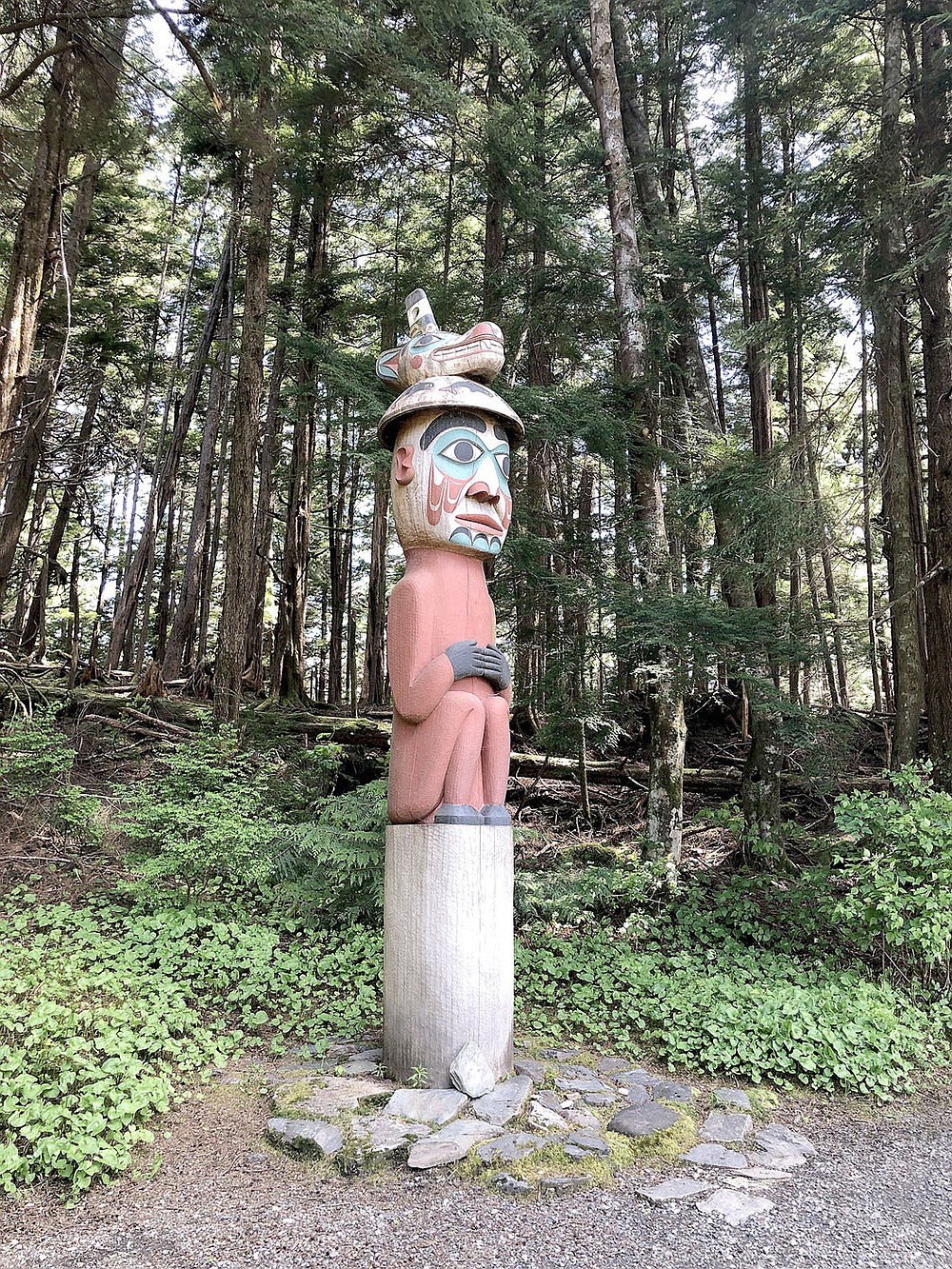 First totem pole on the Totem Bight trail proper. Totems are carved with the pole lying on the ground. Most totem poles are made of red cedar because the wood holds up well over time. 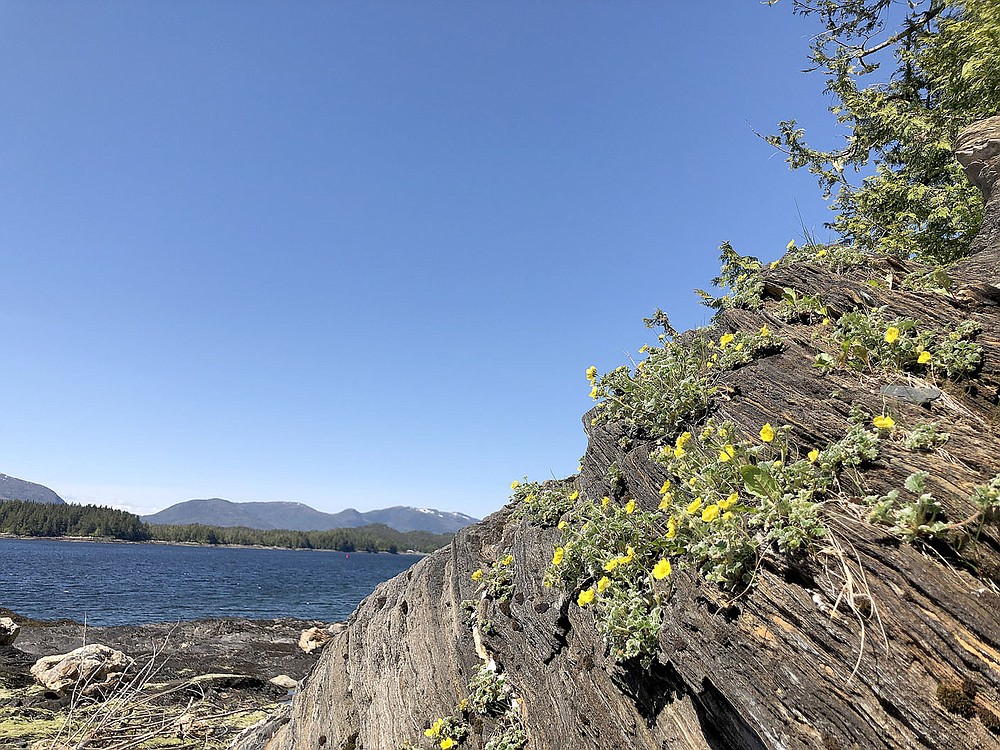 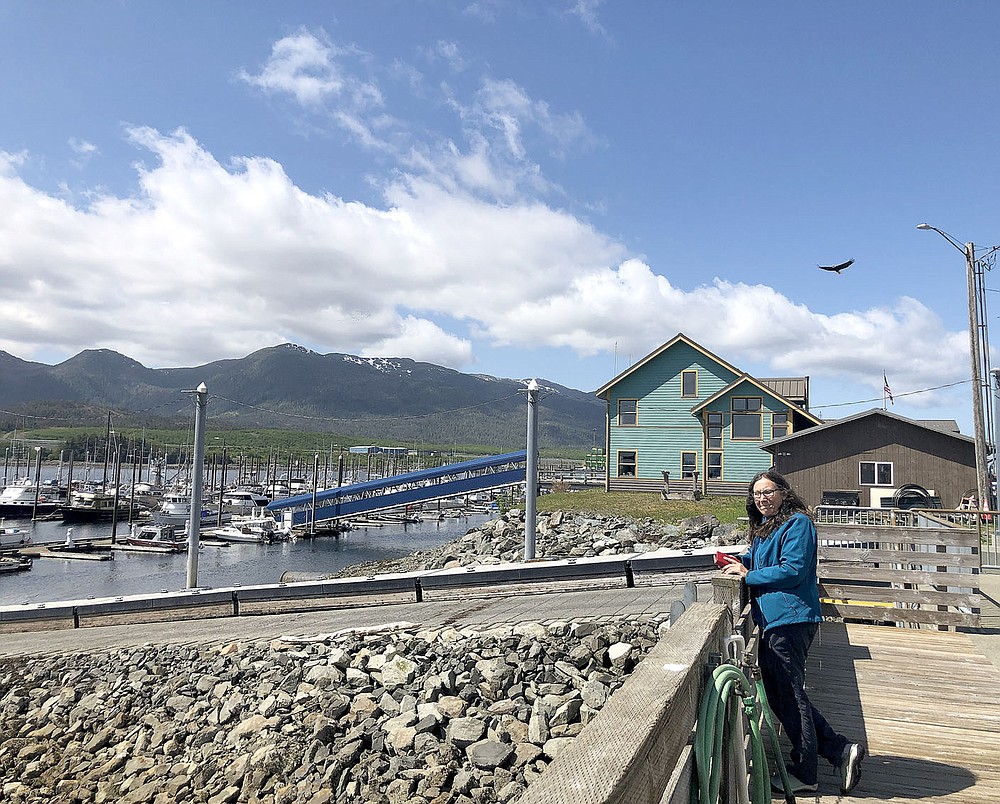 An eagle flies over Gail Streett in Ketchikan, Alaska.
ADVERTISEMENT