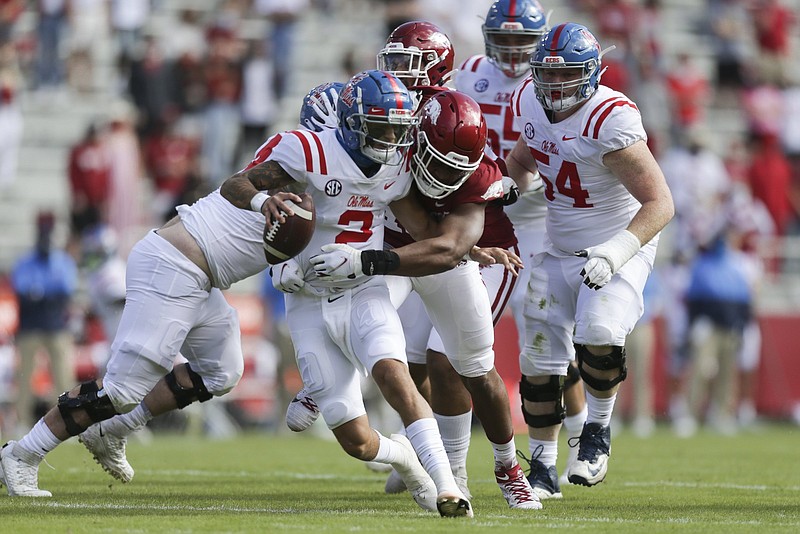 Ole Miss quarterback Matt Corral (2) led the nation in total offense last season, but he struggled in a loss at Arkansas, throwing six interceptions. “I can promise you one thing,” Corral said this week at SEC Media Days. “The next time I play that defense, it’s going to be much different.” (NWA Democrat-Gazette/Charlie Kaijo)

The week before the Rebels played at the University of Arkansas, Corral hit 21 of 28 passes for 365 yards and 2 touchdowns without an interception in a 63-48 loss to Alabama.

But the Razorbacks made Corral look downright terrible as they intercepted him six times in their 33-21 victory.

“I’m not one for excuses, at all,” Corral said at SEC Media Days this week. “That game was fully my fault. I take full responsibility for that.” Corral, a junior from Ventura, Calif., who made his eighth career start at Arkansas, said he had never faced eight players dropping into coverage, the scheme devised by Razorbacks defensive coordinator Barry Odom.

“Those mistakes were fixable,” said Corral, who competed 20 of 38 passes against the Razorbacks for 200 yards and 2 touchdowns. “I learned from watching the film over and over.

“You could see the open man. You could see I just didn’t have the right thought process playing against that defense.” Arkansas will play at Ole Miss on Oct. 9.

“I can promise you one thing,” Corral said. “The next time I play that defense, it’s going to be much different.” Ole Miss Coach Lane Kiffin said he’s often asked why he didn’t bench Corral against Arkansas.

“I’ve just always believed that you’re really slow to do that because you get into pulling the quarterbacks, go back and forth, and their confidence is lost,” Kiffin said. “It’s not like another position. When you’re the leader and you’ve got to take the ball every single snap, your confidence is rattled floating different guys in there.

“So I’m glad we stayed with him. He learned a lot from it. Sometimes you’ve got to have obstacles. Throw the ball to the other team six times, that’s a pretty good obstacle. So it’s a lesson for all of our players. You’ve got to go back to work and be humble.” Kiffin made sure Corral didn’t have any time to wonder whether he was still the starter.

“Coach Kiffin brought me into a room after that game, and he told me that there’s a reason that he didn’t pull me,” Corral said. “He said he believed in me. He said, ‘I believe what you can do. I believe in your ability. You’re our guy moving forward.’ Just having that relationship with him helped a lot.” Corral completed 144 of 200 passes (72%) for 2,057 yards and 18 touchdowns with 7 interceptions in the final six games after losing at Arkansas.

“I think it says a lot about him that he was able to recover from that,” Kiffin said.

“Matt is one of the hardest workers on the team, and Coach Kiffin sticking with him after that Arkansas game, it didn’t shock any of us,” Jones said. “Because we knew Matt was our guy. He’s our leader.” Kiffin said people tend to forget Corral didn’t become a full-time starter until last season. He also was adjusting to a new coaching staff and new offense and didn’t have the benefit of spring practice in 2020 because of the coronavirus pandemic.

Now Corral has started 14 games, including all 10 last season, and experienced spring practice with Kiffin.

“I think he played as well as anybody in the country at times last year,” Kiffin said. “Now he’s got to do it more consistent.” Jones said Corral continued to improve throughout spring practice and summer workouts.

“From all I’ve been seeing, Matt every day is looking to get better,” Jones said. “He is getting better.

“This year, I think he’s going to put up way more numbers than he has before just because of his mental side of it. You can tell that he’s noticing things before the ball is snapped. He’s getting guys aligned. He’s really becoming a general more than he was before.” Kiffin, asked his preseason choice for All-SEC quarterback, said Corral.

“We expect Matt to play better,” Kiffin said. “Be more consistent, limit turnovers, take care of the ball better.” Jones said what stands out about Corral physically is his arm strength. Last season he led the SEC with eight completions of 40 or more yards.

“Whether at practice or in games you’ve seen DBs can be right on the receiver, and Matt is going to throw his receiver open,” Jones said. “For the deep ball, he’s real accurate.

“No matter if you’re running with the receiver or not, you’ve got to play his hands because Matt’s going to throw it right in the bread basket.” Despite the inclusion of 16 sacks last season for 112 yards in losses, Corral averaged 4.5 yards per carry and had 4 rushing touchdowns.

“Matt is actually pretty fast,” Jones said. “During this offseason right now, he’s sticking with a couple of us — or trying to. I think he uses his legs real well in games.” Corral credited Kiffin and offensive coordinator Jeff Lebby for his development.

“They’ve all done a great job of forming me into this quarterback ultimately,” he said. “Not only a quarterback, but a better person off the field. They changed my whole thought process in how I look at a defense and how I just approach the game and the way I get ready for a game.

“It’s something different that I didn’t do two years ago when I was a freshman. Now it’s become habit. Truly, I’m blessed. I got lucky with them. I did.”

With Kiffin calling the plays and Corral taking the snaps, Ole Miss again should have a high-powered offense. The key to the Rebels moving up in the West is showing improvement on defense so they don’t always have to get in a shootout to have a shot to win. The defense doesn’t need to be dominating, but playing more sound and not having to take as many chances would be a big help.