PREP FOOTBALL: Hogan glad to be back home in Greenwood 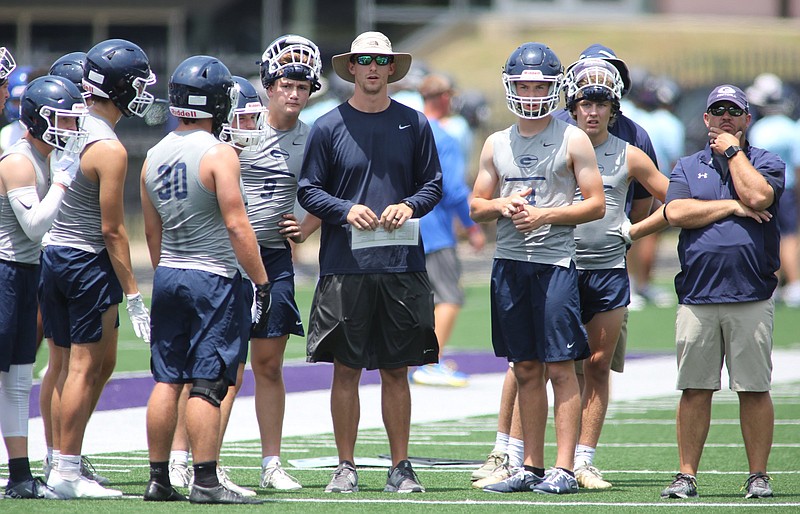 New Greenwood co-offensive coordinator Stephen Hogan was impressed with what he saw from quarterbacks Hunter Houston and Slade Dean at last week’s Southwest Elite 7-on-7 tournament. “They know this offense better than just about anybody. … I’m looking forward to working with them,” Hogan said. (NWA Democrat-Gazette/David Gottschalk)

SPRINGDALE -- Stephen Hogan's return to Greenwood as a coach means he may have a conflict with the start of duck season.

Hogan, an avid duck hunter and turkey hunter, will join the Bulldogs as a co-offensive coordinator in charge of the passing game. It is a return home for the former state champion Greenwood quarterback.

"I'm excited about our offensive staff this year," Greenwood coach Chris Young said. "We've got four guys that call the offense. We've done the same things we've done in the past; we'll call it by committee."

Offensive line coach Austin Moreton will coordinate the running game. Josh Holloway, who has spent the past 10 years with Greenwood's junior high team, will also help with the offense.

"I split the coordinator duty between the offensive line coach Moreton, who we hired last year and did a phenomenal job with our offensive line, and he'll handle the running game, and coach Hogan will handle the passing game," Young said. "Then Josh Holloway, we moved up from our junior high and he's run the offense the last 10 years there. He probably knows our offense as well as anybody. I feel really good about our offensive staff."

Hogan and the Bulldogs competed in the Southwest Elite 7-on-7 tournament at Shiloh Christian last week, and Hogan was able to watch quarterbacks Hunter Houston and Slade Dean a lot over the two days.

"Hunter Houston and Slade Dean are highly intelligent human beings," Hogan said. "They know this offense better than just about anybody. I got to watch some film from Hunter last year. He started a couple of games and won those. Slade's stats in the ninth grade are unbelievable. I'm looking forward to working with them."

Hogan can certainly provide helpful knowledge to his young quarterbacks. Houston is a junior and Dean is a sophomore. Hogan moved to quarterback for his senior season in 2010 from receiver at the request of former Bulldogs' coach Rick Jones, and guided the Bulldogs to the Class 5A state championship. He earned all-state honors and was selected to play in the Arkansas High School Coaches Association All-Star game.

Hogan orchestrated one of the most dramatic comebacks in state championship history in Greenwood's 36-35 win over Camden Fairview. The Bulldogs trailed 35-21 when they took over possession after forcing a punt with 5 minutes, 8 seconds left in the fourth quarter.

It earned him a scholarship to Arkansas State where he played under Hugh Freeze, Gus Malzahn, Bryan Harsin and Blake Anderson in consecutive seasons.

Upon his graduation, he spent four seasons at Owasso, Okla., winning state titles in 2017 and 2019 as the quarterbacks coach. Bill Patterson hired Hogan out of Arkansas State in 2016 before Bill Blankenship took over in 2017. Last year, Hogan was at Sand Springs under Bobby Klinck, who had been on the staff at Owasso before taking over at Sand Springs, as the offensive coordinator.

"I played for Coach Jones, and Bill Patterson hired me at Owasso and then to coach under Bill Blankenship, those opportunities are priceless," Hogan said. "The knowledge that those guys have and to have that poured into me is second to none."

Add to that his experience under the coaches he played for at Arkansas State, and it's an absolute treasure trove of coaching influence.

"I was very fortunate for my college experience," Hogan said. "To be where I am now and to have that experience, I draw on that every day."

Hogan knows, though, that he's not those coaches.

"These kids are smart," Hogan said. "They can tell if you're being fake. You have to be true to yourself but you take those lessons and to see how those guys run a meeting room, how they coach their position, how they build a relationship with the players. The schematics are what they are and everybody has their own way of doing stuff, but it's about the players and those relationships. You take what you like and try to emulate it but at the end of the day you have to be true to yourself."

Hogan met his wife, Savannah, while at Arkansas State. Savannah is from Baton Rouge, La., in southern Louisiana. They knew they would eventually wind up closer to their hometowns.

"We always knew we would be back in Arkansas," Hogan said. "We didn't know when. We didn't know where. Oklahoma for us wasn't home. It was far away from her family, and it wasn't with my family. We don't have any roots there. It wasn't a hard conversation. She kind of expected it at some point. We were understanding it wasn't a long-term deal for us. She's been supportive and helping us out. She's a trooper."

Hogan put the feeler out a couple of years ago about possibly returning to Greenwood someday as a coach, and when Zach Watson, last year's offensive coordinator, took the head coaching position at Elkins, Young made the call.

"Absolutely, I love being back home," Hogan said. "It was a good five years in Oklahoma. I was able to be a part of some really good coaching staffs, but the opportunity came up to be at home and work with Coach Young, and I couldn't pass it up."

Having been under Young when he was the offensive coordinator and seeing him operate, Hogan considers Young on the same plateau as all those other coaches he's been around.

"You bring that knowledge into it and truth is being with Coach Jones for the last 15 or 20 years, he's up there on the level with those guys," Hogan said. "Having those conversations if the window ever opens, I'd like an opportunity to come back. To have that opportunity, I'm thankful to be here. It is home, and I'm glad to be here."

Being the passing game coordinator for the Bulldogs carries with it a huge expectation. Greenwood has had a quarterback throw for at least 2,000 yards 25 times, which is the most in the state, and 17 straight seasons.

"If there's a little thing we can take and tweak and do better then we'll do it," Hogan said. "If not, we'll continue to do what we do and execute at a high level and play to our players' strengths."

m Following is a list of Greenwood quarterbacks to pass for at least 2,000 yards in a season, by year:

Print Headline: Hogan thrilled to be back home in Greenwood