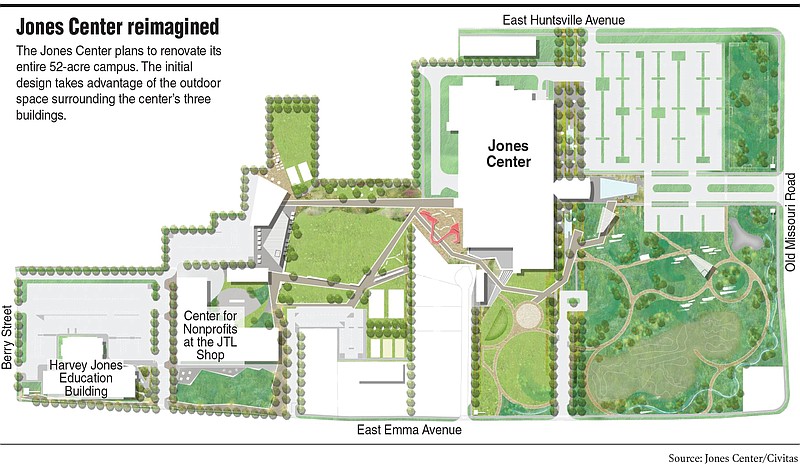 SPRINGDALE -- The Jones Center on Wednesday unveiled initial plans for a reimagined campus.

Those plans include an expanded bike park amidst native prairie plantings, a children's playground modeled after geological arch formations in the Ozark forests and sidewalks to guide visitors through the space, much as stick charts helped the people of the Marshall Islands navigate the waters around their home.

The design will impact the entire 52 acres of the center's campus on East Emma Avenue in the city's downtown area, which is undergoing its own revival. The Jones Center sees more than 500,000 visitors each year.

The campus includes not only the Jones Center, but also the Center for Nonprofits at the JTL Shop and the Harvey Jones Education Building, which houses the Community Clinic medical center. The design project would transform the areas between buildings into gathering spaces large and small.

"We want to see people in the outdoor space, existing and enjoying the outdoors," said Scott Jordan, chief architect from Civitas landscape architecture firm in Denver. "We also want to provide intimate spaces where someone can be alone among many people."

The design focuses on the outdoor areas between the three community buildings on the Jones Center campus. It includes places for gathering, places for learning and places to be alone, Jordan said.

Those Marshallese stick charts -- called meto sticks -- lie at the heart of the design, Jordan said. The sidewalks, designed in the image of the charts, will become the spine of the place, carrying community members through the space, he explained.

Marcina Langrine, representing the Marshallese Education Initiative, said each stick represents one wave, telling which way it goes, giving a pattern of the waves between the islands.

Langrine said her community already uses the center, especially the youth who go to play basketball and swim. She said she knows the community will enjoy the new space.

The design team held a contest looking for local artists to join the team as details of the individual spaces take shape. The artists will help the team integrate local art and traditions of all communities into the outdoor spaces to make the Jones Center a cultural destination.

"It can't be just the big vision of the architects," Jordan said of the space. "We're not done with the community yet."

Jordan introduced those artists as Danielle Hatch, whose work focuses on the body's relationship to the build; Al "Papa Rap" Lopez, who focuses on bringing the community together through his songs; and Reilly Dickens-Hoffman, who has been a designer and fabricator of public sculpture for the past 15 years, according to information provided by the center.

Lopez noted the Jones Center isn't just for Springdale. His Latino community accesses its resources from all over Northwest Arkansas.

He said members of diverse communities in the region have added their traditions to the community before adopting traditions already in place.

"They say, 'This what I add to the culture here. And then, I become a Razorback,'" he said.

Lopez said his musical performances -- popular in area schools -- show how all people have different aspects and similar traits.

"They are the same, but different," he said. "And my music also shows people how to get up and dance together."

Lopez also sees his art as collaboration, which he hopes to build in the Northwest Arkansas community.

Lopez gave the example of his band. He needs a sound technician and someone to create a backdrop, in addition to his band members, to stage a performance.

"Ultimately, the vision for the Jones campus must enable all community members to create memorable experiences and give meaning to the diverse population that makes Springdale unique, bringing them back to campus and downtown Springdale over and over again," Jordan said.

The initial design phase for the center included many opportunities for community engagement, from online meetings to surveys on social media and even drive-through dinners. The campaign received input from well over 2,200 people, said Kelly Kemp-McLintock, chief advancement officer at the Jones Center.

Those community members echoed the vision of Bernice Jones more than 25 years ago: "A place for all," Jordan reported. That idea became a guiding principle of the design, he said.

Ed Clifford, chief executive officer of the Jones Center, expects construction to be "well underway" by 2023.

Bernice Jones established the center in 1995, with a vision to serve Northwest Arkansas families, Kemp-McLintock said. She wanted to repurpose the facilities of the Jones Truck Lines into a regional 220,000-square-foot recreation and education space. She was the widow of Harvey Jones, founder of Jones Truck Lines.

"When Bernice founded this organization, she welcomed members of all communities, families, ages and backgrounds," Clifford said. "She wanted the Jones Center to be a place that fosters acceptance and provides accessibility to health and well-being opportunities for all. We're glad our outdoor spaces will be an extension of her initial dream."

See the design plans for the Jones Center renovation as well as results of the community input sessions at jonescampusvision.com.