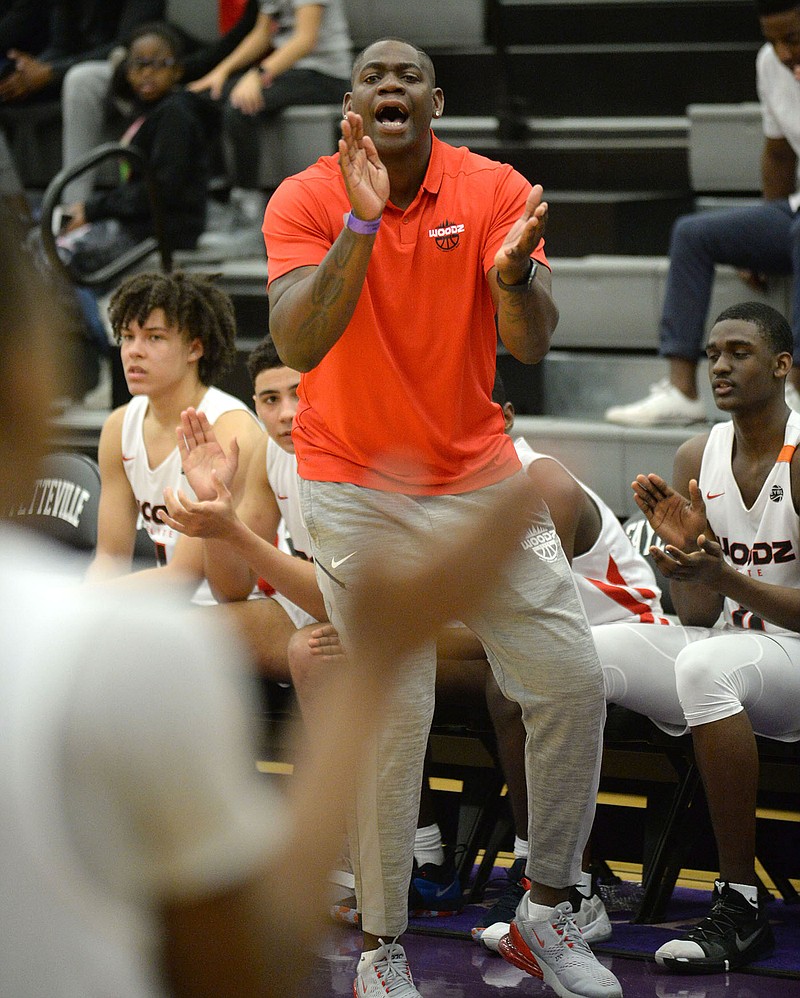 Former University of Arkansas standout Ronnie Brewer was hired this week as the Razorbacks’ recruiting coordinator. A first-round NBA Draft pick in 2006 by the Utah Jazz, Brewer was an assistant boys coach at Fayetteville and the coach of the 16-Under Woodz Elite before his hiring by Arkansas Coach Eric Musselman. (NWA Democrat-Gazette/Andy Shupe)

A first-round pick of the Utah Jazz in 2006, Brewer played nine seasons in the NBA with Utah, Chicago, New York, Houston, Oklahoma City and Memphis.

Brewer, who will work with director of recruiting Michael Musselman, was an assistant boys coach at Fayetteville High School and the coach of the 16-Under Woodz Elite team.

"I think Ronnie will do excellent work with these college guys," Ingram said. "He knows the game. He's already been to all the places where they want to go as far as level of play. He was a lottery pick. He played in the league for nine years.

"He can tell them the dos and don'ts, and he's an Arkie. I think they needed to get an Arkansas guy on the staff, and they couldn't find a better guy."

Some of the former Hawks who have gone on to become Razorbacks include Joe Johnson, Daryl Macon, Isaiah Joe, Carl Baker and Trey Thompson. Current University of Arkansas guard commitment Joseph Pinion plays for the 17-under Hawks.

"Ronnie is well-liked in all of the AAU circles and all the programs," Ingram said. "It can't do anything but help with them recruiting in-state guys."

Bryan Adams, the executive director of Woodz Elite, also sees the hiring as a plus for in-state recruiting.

"If you were designing a guy to be part of your basketball program's coaching staff, Ronnie Brewer would be the prototype," Adams said. "He checks all the boxes. Ronnie has a magnetic personality.

"When he walks in the room, he commands your attention."

"Ronnie has worked hard to get involved with high school and grass-roots basketball coaches in Arkansas with Fayetteville High School and Woodz Elite," Rice said. "It's a no-brainer that he would be a good fit for recruiting at the university."

"I think it's a wonderful hire," Jones said. "You get another guy with NBA experience who can relate to current high school and college young men. You also get a guy from here that knows his way around the state."

Fayetteville Coach Brad Stamps coached Brewer at Woodland Junior High in the seventh and eighth grades, and from his sophomore to senior season with the Bulldogs.

"I think he's a good fit because, No. 1, he's always been a great ambassador for the University of Arkansas and Razorback basketball, and he has a lot of pride in Arkansas and where he played," Stamps said. "He wants them to do well."

Brewer is well-respected on the high school and spring and summer basketball circuits, which should bode well in his new position.

"The credibility he's gained with parents and families and turning [kids] over to him and traveling with him all over the country, and then his influence in those young people's lives, that's a big deal," Stamps said. "It's instant credibility with those people in the recruiting game because they've seen him firsthand here for a couple of years traveling with AAU clubs."

Jonesboro Coach Wes Swift has gotten to know Brewer while coaching in the Woodz Elite organization.

"For a man to have accomplished as much as he has as a player and still be as humble and kind as he is to everyone, it's really inspiring," said Swift, who coaches the 15-under Woodz Elite squad. "He loves that university and our state.

"I think it's a home-run hire for Coach Muss, and he'll be great in that role."