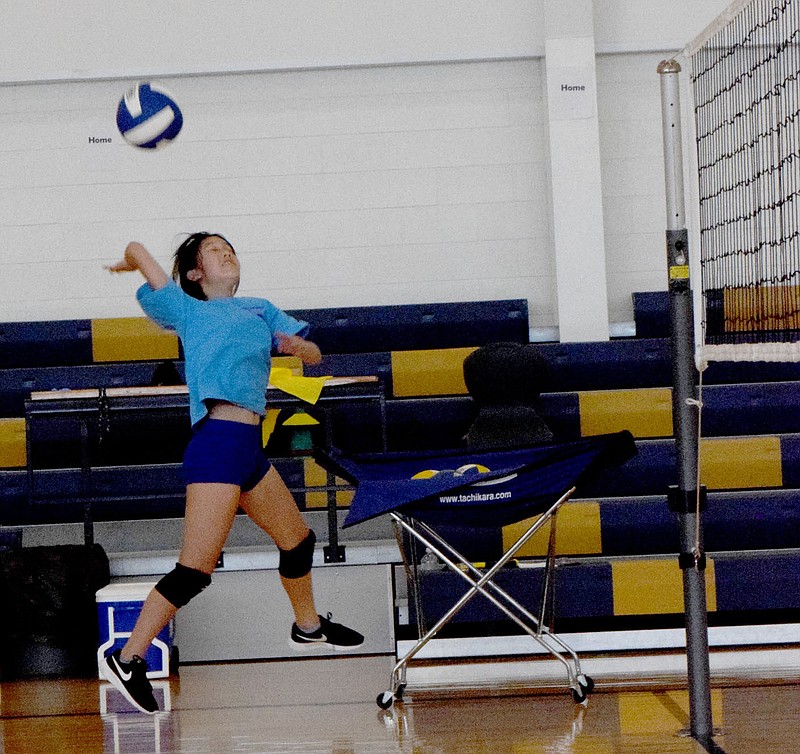 DECATUR -- With a little over a month left in the summer vacation, Decatur coaches are scrambling to utilize every bit of practice time to get ready for the upcoming 2021-22 sports season.

Coach Dayton Shaw has already taken both his junior and senior high boys to several basketball team camps, including one in Fayetteville and one at Alpena (one of the Bulldogs' old rivals). One problem that has plagued his senior high team is that many of his athletes work summer jobs to earn extra money or help support their families. So few high school athletes had the time to attend these camps. Bad for the senior high but good for the junior high team.

Team camps help coaches develop new game plans, work out problems in previous plans and allow players to learn to work together as a team. Attending such camps give coaches the chance to see his kids in a real game setting and to evaluate each player's strengths and weaknesses.

While back at Peterson Gym in Decatur, Shaw worked with some of his younger players to build their knowledge and execution of their basketball skills.

Over the course of the next week, Shaw plans on taking his teams to the Ozark Catholic Academy's team camp in Rogers, before terminating summer practice to allow some kids to participate in preseason football practice.

During the evening, Fess Thompson worked with his junior high girls team in much the same manner as Shaw. He puts the girls through agility and dribbling drills to get them use to playing his fast-paced kind of basketball. Like Shaw, Thompson suffers from lack of senior high players due to schedule conflicts and lack of interest in the sport at present.

Both Shaw and Thompson feel that once school starts, the lack of interest will change and more senior high as well as junior high boys and girls will sign on to play Bulldog and Lady Bulldog basketball.

At present the junior and senior high Bulldogs and Lady Bulldogs are slated to begin the 2021-22 basketball season with a benefit game against the Deer Antlers and Lady Antlers at Peterson Gym in Decatur on Nov. 5 beginning at 4:30 with the junior high girls contest.

Two weeks before the mandatory practice shutdown by the Arkansas Activities Association (something the AAA does every July), the volleyball team, coached by Cali Lankford, began its practices. Much to the delight of Lankford, 12 junior high girls showed up for her first practice as well as seven of her senior high team members.

The teams practiced Monday through Thursday at Decatur Middle School gym until the July 1 shutdown. The teams resumed its scheduled practices July 13 in order to prepare for the start of the 2021 2A volleyball season which starts Aug. 26 with a home game against Ozark Catholic Academy at the Middle School Gym in Decatur.

The Decatur Cheerleaders, under Shara Coffelt's guidance, began its practices July 13 at Bulldog Stadium in Decatur. The team consist mainly of eight seventh- through 10th-grade girls. They will learn a few new routines as well as stunts and hopefully soon the cheerleaders will be primed and ready for action. There first appearance will be during the Blytheville Kipp High School eight-man football contest starting at 6:30 p.m. at Bulldog Stadium in Decatur. 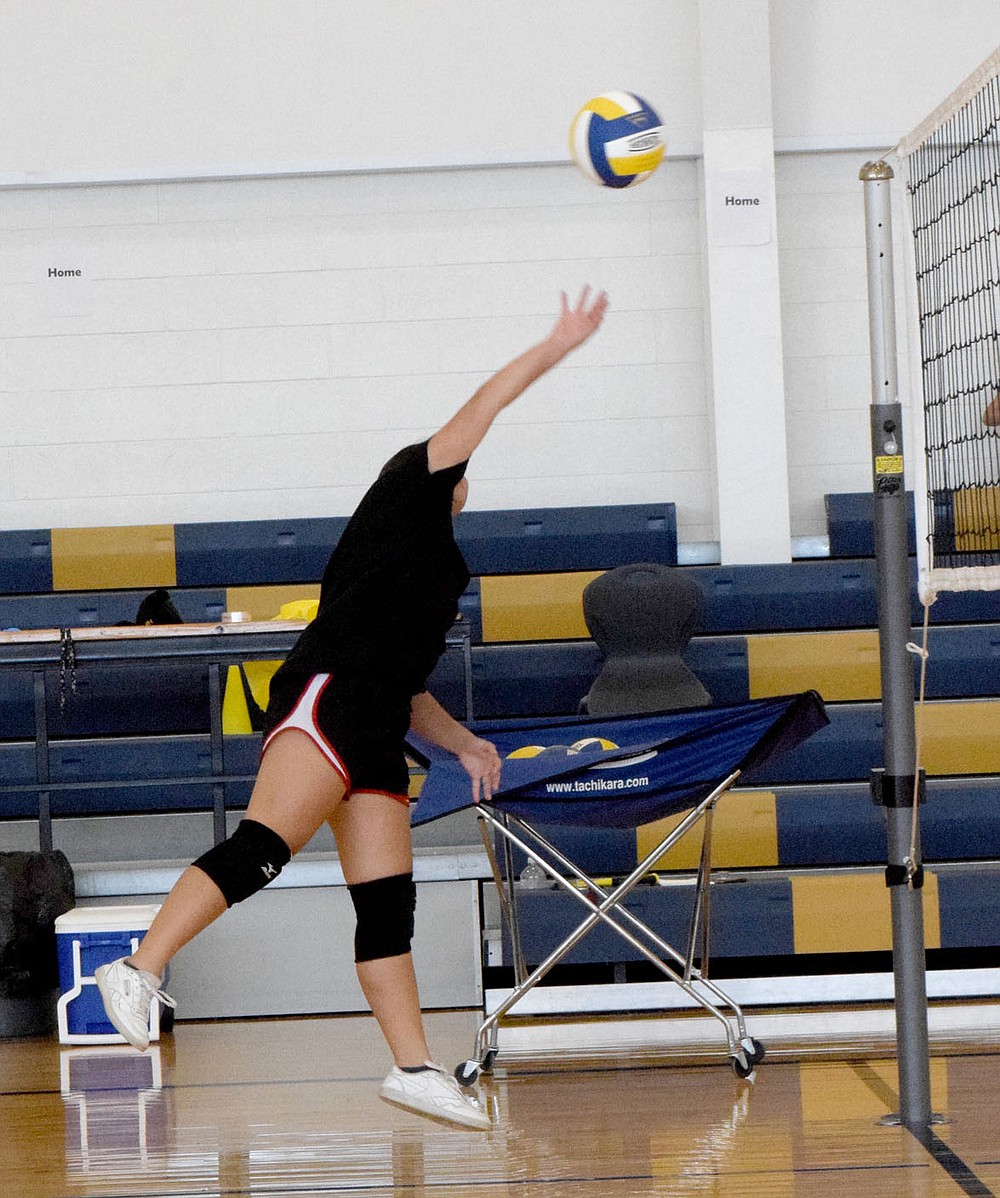 Westside Eagle Observer/MIKE ECKELS Lindy Lee hits the ball over the net during a volleyball training exercise in the gym at Decatur Middle School Thursday morning, The Lady Bulldog junior high team is getting ready for its 2021 volleyball season which starts in late August. 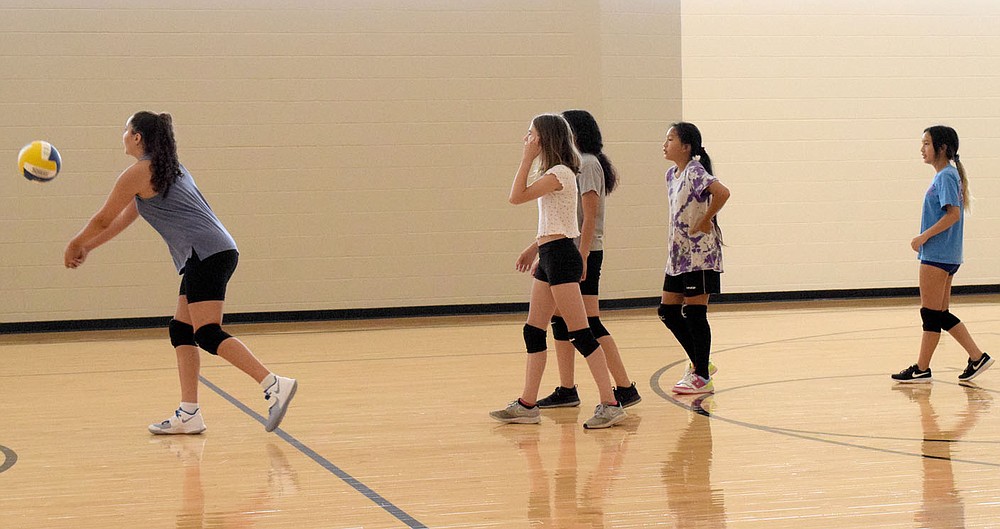 Westside Eagle Observer/MIKE ECKELS Ariana Kumbera (left) leads four other Lady Bulldog junior high volleyball players in an exercise in which the girls hit the ball to teammates on the opposite side of the court during junior high volleyball practice at Decatur Middle School Gym Thursday morning. The exercise is designed to teach the players to control their hits as they return the ball back and forth over the net. 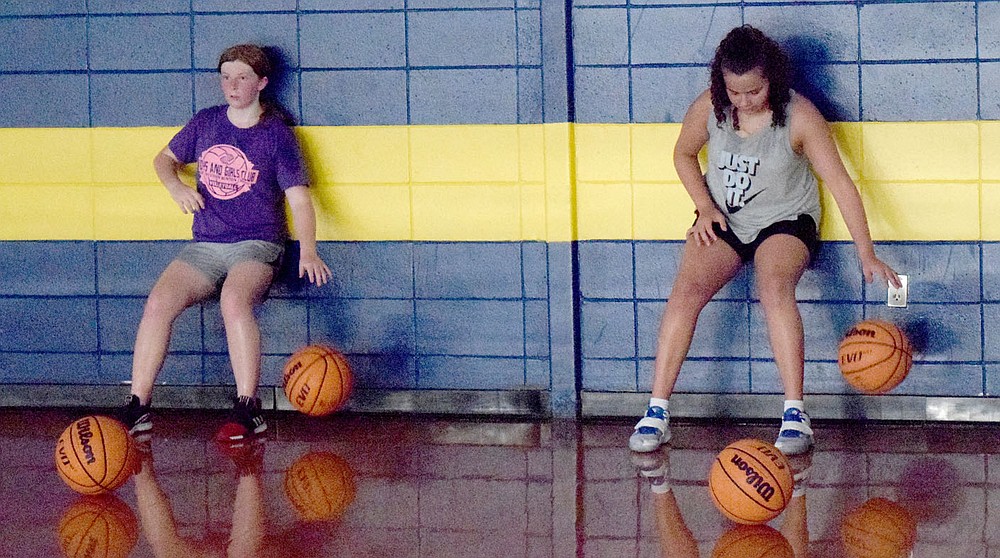 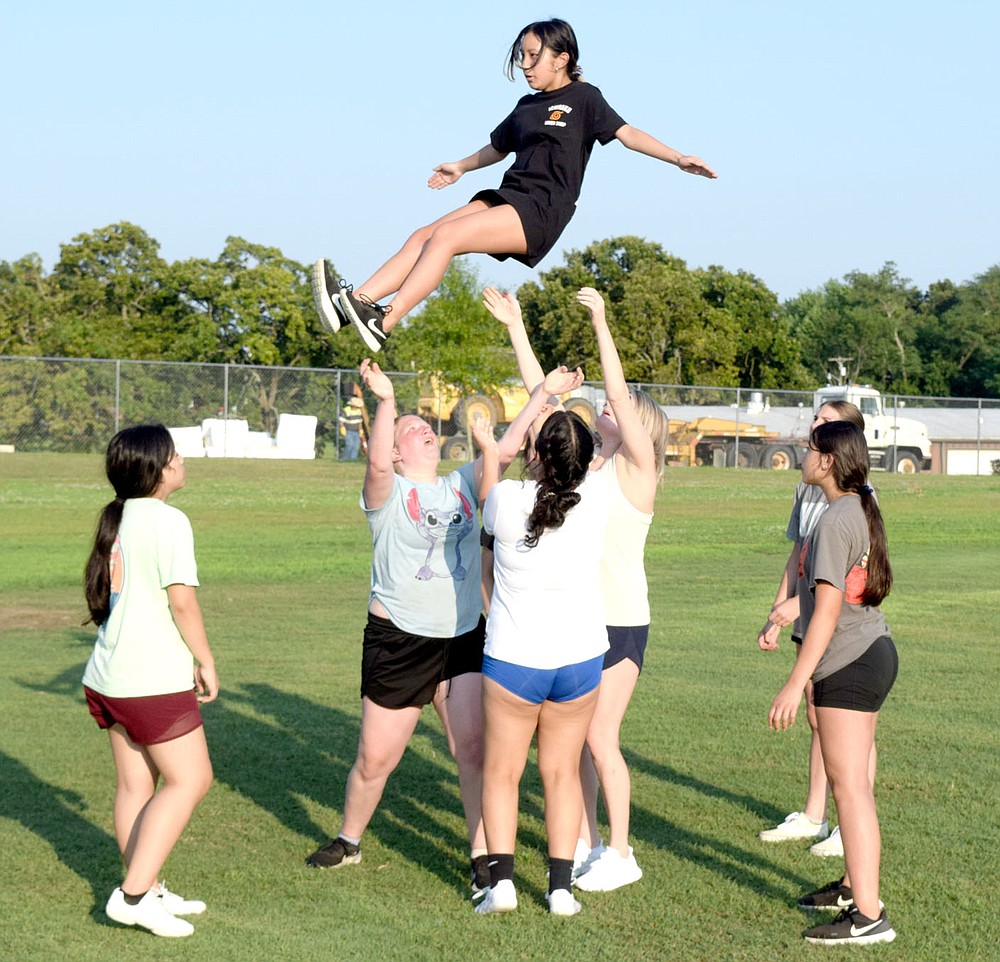 Westside Eagle Observer/MIKE ECKELS McKenzie Thao (top) does a dismount from a prep stunt during the July 13 Decatur cheer team practice at Bulldog Stadium in Decatur. At present, the cheer team, volleyball and boys and girls basketball are all preparing for the 2021-22 sports season. 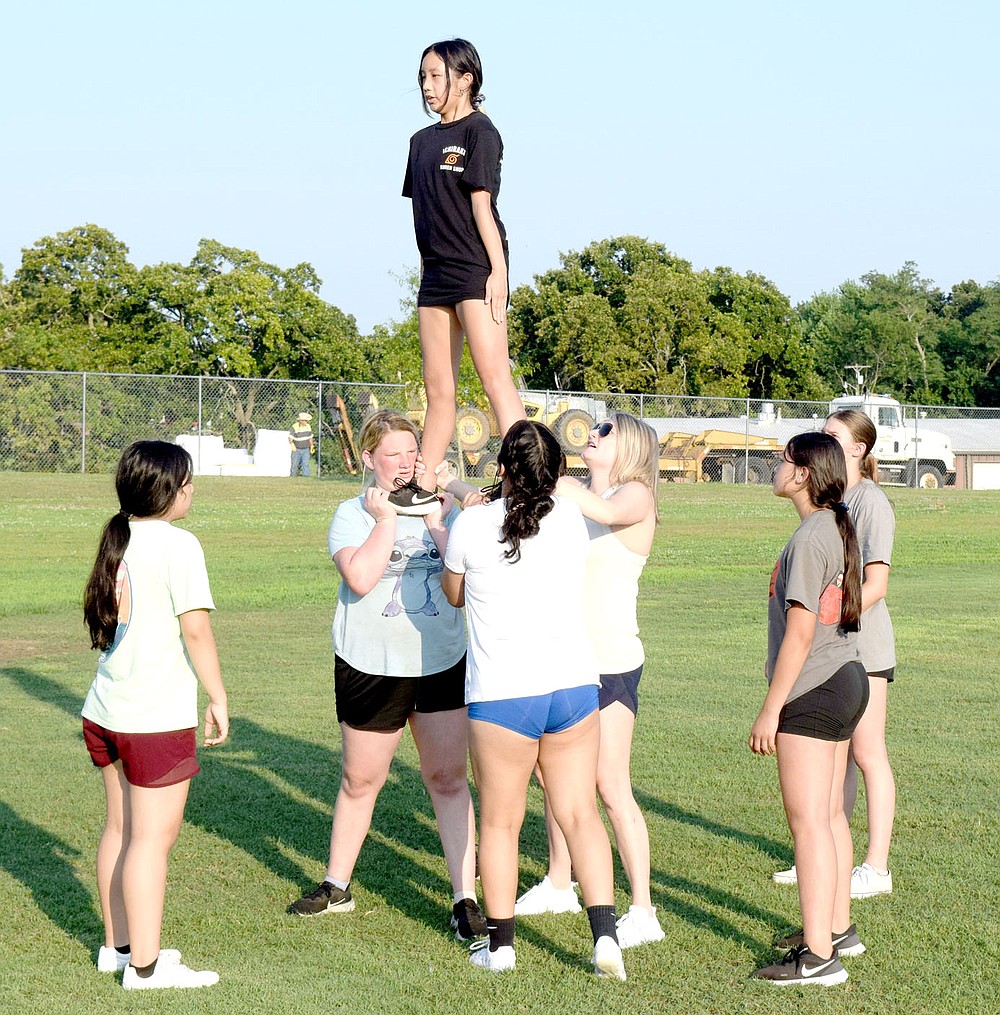 Westside Eagle Observer/MIKE ECKELS McKenzie Thao stands tall as she and the Decatur cheer team perform a prep stunt at Bulldog Stadium in Decatur July 13, The cheerleaders, led by Shara Coffelt, will show off the team's talent during the first home football game in mid-September. 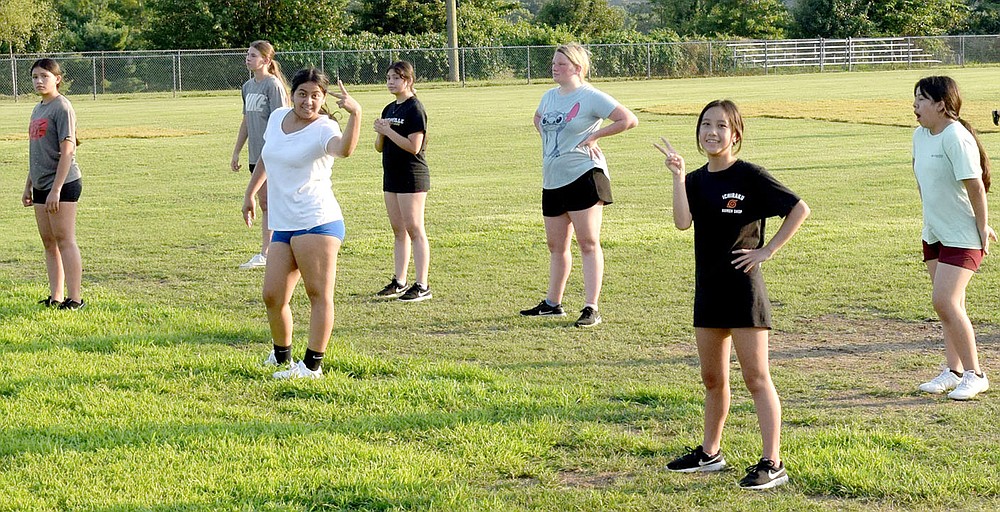 Westside Eagle Observer/MIKE ECKELS The Decatur cheerleaders rest for a minute before pushing ahead with their practice session at Bulldog Stadium in Decatur July 13. The young team, led by Shara Coffelt, is preparing for its debut during the first home eight-man football contest in mid-September.