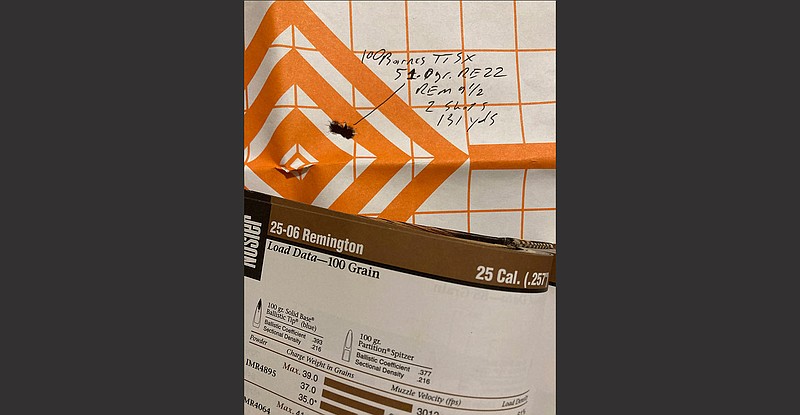 The 25-06 Rem. is capable of remarkable accuracy in a powerful, easy-to-shoot package that makes it ideal for Arkansas deer hunting. (Arkansas Democrat-Gazette/Bryan Hendricks)

Deer hunters who were searching for a new deer rifle are probably still searching after last week’s introductory feature about .22-caliber centerfire cartridges.

The summary of that article is that .22-cal. centerfires are good for a lot of things, but deer hunting is at the upper limit of their abilities. There are better choices.

The next stop in this vast deer hunting department store is .24 caliber. There is one legitimate option in that category. That makes for a boring article, so let’s include .25-caliber, as well.

Several entries have entered this underappreciated niche over the years, but only the 243 Winchester endures. It is a 308 Winchester case with the neck constricted to seat a .243-inch diameter bullet.

Its best attribute is low recoil. It does not induce flinching, so it promotes proper shooting technique, including clean follow through. That translates to accuracy, the most important characteristic for any hunting rifle. That’s why it’s just as good for a burly country boy as it is for a preteen or a woman.

Until fairly recently, low-performance bullets limited the effectiveness of small-bore cartridges like the 243 Winchester for hunting deer-size game. Bullets like the Winchester Power Point and Remington Core-Lokt are not designed for long-range ballistics. A detailed explanation requires a treatise on ballistic coefficient. Distilled to the elemental level, ballistic coefficient defines a projectile’s ability to travel through air straight and level. Bullets with high ballistic coefficients maintain velocity better than low-B.C. bullets, so they don’t drop as fast and are less vulnerable to drift.

Now, hunters have access to high-performance, .243-cal. hunting bullets in both factory ammunition and for reloading. These bullets have high ballistic coefficients, but they also expand reliably and retain their mass on impact and while traveling through a target. That translates to a clean kill, and that’s what you want in a hunting bullet.

The 243 Winchester is available with bullets weighing about 55-100 grains, with many stops in between. The lightest bullets clock about 3,300 feet per second. The heaviest top out around 3,000 fps. That’s the general threshold for all hunting cartridges. Bullets are bigger and heavier as you ascend in caliber, but all cartridges launch them at roughly the same speeds.

Other cartridges in the .243 family include the 6mm Remington, the 243 Winchester Super Short Magnum and the 240 Weatherby Magnum. The 6mm Remington is a tad faster than the 243 Winchester, but American hunters historically rejected metric cartridge designations until the 6.5 Creed-moor stole everybody’s hearts. The 240 Weatherby Magnum is the fastest of the lot, capable of driving a 62-grain Barnes copper bullet faster than 4,000 fps. That’s smoking hot, making it suitable for long range shooting. The 243 WSSM is about 150 fps slower.

The 240 Weatherby Magnum is proprietary, so it’s only available in a Weatherby rifle. That combination is rare and expensive, as is ammo. None of the WSSM cartridges ever caught on with the public, so any rifle chambered for 243 WSSM is a collector’s item.

Hunters that use the 243 Winchester love it, but it is a long-range cartridge only in the hands of an expert.

Known affectionately among its devotees as the “quarter bore,” the .257 caliber family of cartridges is ideal for Arkansas deer hunting.

The range of bullet weights is 75-120 grains. The selection of modern, high-performance bullets is vast.

Like the .243 family, there have been a lot of contenders for supremacy in the .257 family, but only two have staying power. They are the 25-06 Remington and 257 Weatherby Magnum. There’s also the 257 Roberts and the 25 WSSM.

Of these, the 25-06 Remington is the most popular. It is a 30-06 Springfield case with the neck constricted to take a .257-inch diameter bullet. That big case contains a lot of powder to drive it to an average speed of 3,123 fps, according to gundata.org, which also says its ballistics ensure deep, penetrating wounds on deer-size game out to 250 yards.

Attaining maximum velocity requires a long barrel to burn the large amount of slow-burning powder that a 25-06 cartridge contains. Most literature claims that 24 inches is the minimum length necessary to wring out the cartridge’s potential. My Browning A-Bolt II Medallion has a 26-inch barrel. This is unwieldy for confined environments like box stands.

The 257 Weatherby Magnum is the fastest of this family, and it is arguably the only Weatherby cartridge to attain mainstream acceptance. A lot of hunters use it and swear by it, and for good reason. It flies fast and straight, and it hits hard.

Again, the 257 Weatherby is proprietary. The Weatherby Vanguard, which a high-quality, Japan-made Howa action, is an affordable, high-quality alternative to the Weatherby Mk. V. Only Weatherby makes ammo for it, and it is very expensive.

The 257 Roberts endures because magazine gun writers refuse to let it die. Its mild ballistics make it suitable for most Arkansas hunting situations. A 22-inch barrel is sufficient for its comparatively mild powder charge, and that creates a compact package suitable for box stands and ground blinds.

My aforementioned Browning A-Bolt II Stalker has a 20-inch barrel with a Ballistic Optimizing Shooting System. That short barrel essentially duplicates 257 Roberts ballistics. It is decisively lethal on small bodied, piney woods deer out to 200 yards.

While hunting at Cottonmouth in Louisiana several years ago, a mature buck weighing about 220 pounds ran more than 200 yards after taking two perfectly placed shots in the heart/ lung area and in the neck. Both shots were with hand-loaded 110-gr. Barnes Tipped Triple Shocks.

That experience convinced us to leave that rifle at home next time we’re invited to hunt a place populated by big-bodied deer.

All of the Winchester Short and Super Short Magnums are designed to duplicate existing cartridges. The 25 WSSM is designed to duplicate the 25-06 in a squat, fat case that is infamous for not feeding reliably from a magazine. Rifles chambered for 25 WSSM are rare, and factory ammo is even rarer.

A generous selection of rifles from many manufacturers is available in 243 Winchester and 25-06 Remington. We prefer the 25-06 for its versatility. For hunting deer, feral pigs and coyotes in Arkansas, it’s all you will ever need.