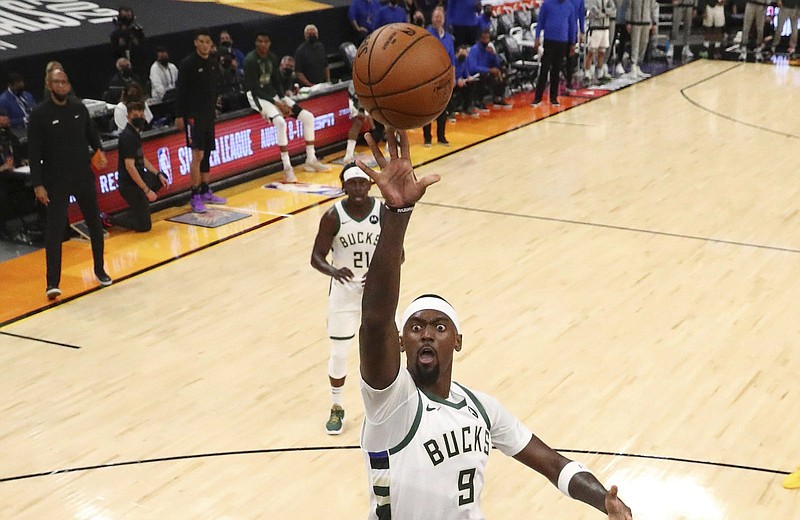 Bobby Portis (Little Rock Hall/Arkansas Razorbacks), shown during Game 5 of the NBA Finals on Saturday, helped lead the Milwaukee Bucks to their first NBA championship since 1971. He became the first former Razorback to win an NBA title since Corliss Williamson won with the Detroit Pistons in 2004. (AP/Mark J. Rebilas)

For the first time since 2004, a former University of Arkansas basketball player is an NBA champion.

On their home floor Tuesday night, the Milwaukee Bucks put the finishing touches on the Phoenix Suns by winning Game 6 of the NBA Finals 105-98 to capture their first championship in 50 years.

Bobby Portis, a two-year standout for Arkansas and a catalyst off the bench for the Bucks throughout this season, starred in his role in the series-clinching victory to become the first former Razorback to win an NBA title since Corliss Williamson and the Detroit Pistons defeated the Los Angeles Lakers in 2004. Portis finished Game 6 with a series-high 16 points on an efficient 6 of 10 from the floor and 2 of 5 from three-point range.

"I wouldn't trade it for the world."

Standing among teammates during the on-court celebration and trophy presentation, Portis yet again heard his name chanted by Milwaukee fans. After Finals MVP Giannis Antetokounmpo and Khris Middleton spoke to the crowd during the ABC telecast, guard Jrue Holiday was addressing the fans when they started in unison, "Bob-By, Bob-By."

Portis (Little Rock Hall) has become a fan favorite in the city, with his name resounding throughout Fiserv Forum during the playoffs after rebounds, baskets or simple energy plays that sparked the Bucks.

After dropping nine assists during Tuesday's game, Holiday made one more pass by handing Portis the microphone. Portis voiced his appreciation for the way the city has embraced him.

"It means the world," Portis said. "For 10 months straight, I was at home just working out, real depressed, just real down on myself for not being invited to the bubble with my team [last year]. Having a chance just to go home, work out and hang out with my mom, I found peace again.

"I found peace in my life, and coming here, man, was the best thing that ever happened to me. I wouldn't trade it for the world."

The 6-10 forward also grabbed three rebounds and added a block, which came late in the third quarter on a layup attempt by Suns guard Cameron Payne as Milwaukee held a 77-71 lead.

The Bucks outscored Phoenix by six points when Portis was on the floor.

Portis scored 10 first-half points behind a pair of first-quarter three-pointers and a mid-range jumper left of the lane in the face of Suns wing Cameron Johnson. Then, in the fourth quarter, he knocked down three critical shots.

His first score in the final quarter broke a 77-77 tie, and his second bucket broke an 82-82 tie. His last hit, a layup after shot faking a pair of Phoenix players on the perimeter, put the Bucks ahead 92-86 with 6:59 to play.

For the series, Portis averaged 7.7 points and 4 rebounds per game. Milwaukee was 8-1 during its playoff run when the forward scored in double figures.

"Bobby went from not playing in the Brooklyn series to being such a huge contributor in the Atlanta series and then in this series against Phoenix," Bucks center Brook Lopez told reporters. "That's the kind of selflessness that the entire team has. Guys are not concerned about their minutes."

Whether Portis remains in Milwaukee is up in the air. He signed a two-year deal worth nearly $8 million in the offseason, but he has a player option for the second year. So he could opt out to try and cash in on his pivotal playoff run for Milwaukee.

Portis played for the Razorbacks for two seasons from 2013-15. He won the SEC Player the Year award in 2015 after averaging 17.5 points and 8.9 rebounds for a Razorbacks team that finished 27-9 and fell to North Carolina in the second round of the NCAA Tournament.