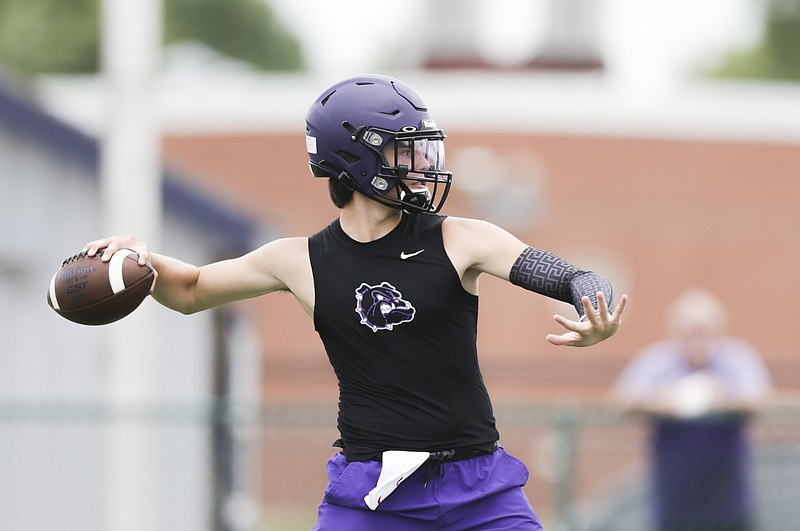 SPRINGDALE -- Cool and confident, Bladen Fike flipped the football in his hands and surveyed the field, patiently looking for an open receiver.

Trailing Oklahoma City Heritage Hall by one point in the championship game of the Southwest Elite 7-on-7 tournament, the game was down to its final play. Scoring a touchdown was the only way the Bulldogs could pull out a win, and Fike was determined to do just that.

The rising Fayetteville senior found an open receiver down the left sideline who raced against the clock for the end zone. As the clock hit all zeroes, the receiver dove past the pylon for what appeared to be the winning score, sending the Bulldogs and Fike into a massive victory dance.

But a few yards behind where Fike had delivered the pass, a tournament official was holding up a red flag, signaling that Fike exceeded the four-second time limit, thus resulting in a sack and negating the clutch pass. Heritage Hall celebrated the 21-20 win, but that did not diminish what Fike and his teammates accomplished to reach the title game.

"It didn't end how we wanted it to, but we played hard," Fike said after the game.

The disappointment of losing a summer passing game pales in comparison to the way the 2020 season ended for Fike. In a 37-35 home loss to Little Rock Central in a first-round playoff game, Fike was the center of attention at the end of the game when he was instructed to take a knee on four straight plays in the waning seconds of the game with his team ahead 35-34.

With the play clock down to just a few seconds and on fourth down, Fike took a knee again and thought the play clock would run out. It didn't. Fike's knee hit the ground with about two seconds left at his own 12. That gave Central time to kick a game-winning field goal and end Fayetteville's season in the most heartbreaking fashion.

"First of all, he should not have been put in the place that he was in," Fayetteville Coach Casey Dick said. "That was obviously our fault and our mistake. And we'll be better because of it, just like we told him. We told him there are certain things that happen in life that are going to be adverse moments that you are going to look back on five or six years from now and those are going to be what shape and define who you were. That's going to be one of those moments."

The mistake was a tough one for the quarterback, being the center of attention at the end of a playoff game. The loss was magnified even more a few days later when the play became a national story on ESPN's C'Mon Man segment before a "Monday Night Football" game, when NFL Hall of Famer Randy Moss called Fike out for not knowing the rules.

Moss' comments drew a firestorm of backlash on social media for singling out a high school football player who made a mistake.

"I don't think that was right for Randy Moss to do that," said Fayetteville receiver Isaiah Sategna, who last week committed to play at the University of Oregon. "I just went on vacation with Bladen and we met some people and we told them we went to Fayetteville High School. And they were like, 'Wait, isn't that the school that had that quarterback who kneeled?' And I said, 'Yep, that's him right there.'

"So a lot of people saw that. It was a lot of negative attention, but he's been better than ever since that night. That stuff doesn't matter anymore."

After that game, Fike took to social media and accepted full responsibility for the mistake, a show of maturity few players his age would be willing to take on. And Fike (6-2, 195 pounds) made a vow that he would learn and improve as a quarterback.

If the Southwest Elite 7-on-7 is any indication, Fike is backing up that claim.

"That made me grow up," Fike said. "I couldn't let my team down again. We had the talent last year to make it further than we did. And that was my fault, how it ended last year. I promised my team after that play that this year we were going to be the best team in the state."

Dick, a former University of Arkansas quarterback, said Fike has used that mistake as a motivating tool during the offseason.

As a junior, Fike put together solid numbers, completing 98 of 189 passes for 1,779 yards and 15 touchdowns despite playing the final two games without the Sategna. He also added five rushing touchdowns. Fike's best game came in the 7A-West Conference opener against Fort Smith Southside, when he was 26 of 44 for 367 yards and 4 touchdowns.

His improvement has certainly caught the attention of Sategna, who on his Twitter account called Fike, "the best quarterback in the state."

"Honestly, I feel like that helped him," Sategna said. "That moment helped him because he's a lot stronger now. He always plays with a chip on his shoulder. The showing he just had in this tournament, he was not doing that last year. I think this confirms that he is the best quarterback in the state with how he played this weekend."

NOTABLE Moved into the starting role in the second week of the 2020 season and led the Bulldogs to the Class 7A playoffs. … Was 98-of-189 passing for 1,779 yards and 15 touchdowns with 9 interceptions. … Rushed for 158 yards and 5 touchdowns. … Against Fort Smith Southside in the 7A-West Conference opener, was 26 of 44 for 367 yards and 4 touchdowns. … Led Bulldogs to runner-up finish in the Southwest Elite 7-on-7 tournament last week at Shiloh Christian.