Jones Center to expand vision of place for community 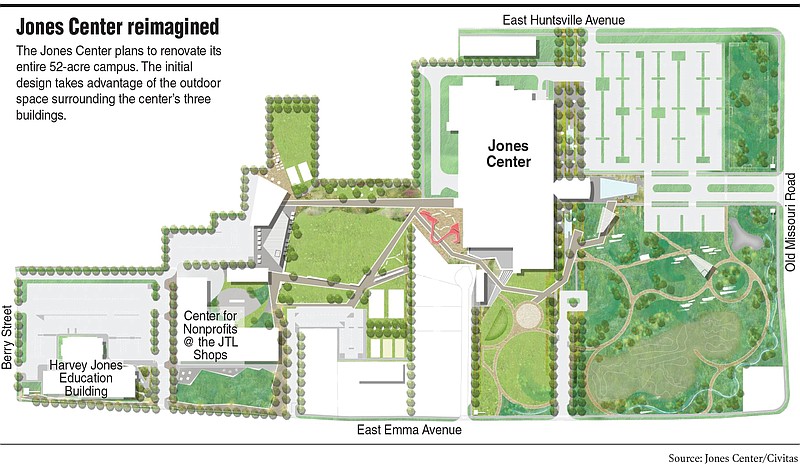 SPRINGDALE -- About 100 members of the community gathered Wednesday morning for the introduction of a redesigned Jones Center which will make use of the entire 52-acres on East Emma Avenue in downtown Springdale.

The initial design phase included many opportunities for community engagement, from virtual meetings to surveys on social media and even drive-thru dinners.

Those community members echoed the vision of Bernice Jones: "A place for all," said Scott Jordan, chief architect from Civitas design firm in Denver. That has become a guiding principle of the design, he said.

The design focuses on the outdoor areas between the three community buildings on the Jones Center campus. It includes places for gathering, places for learning and places to be alone, said Scott Jordan,

Stick charts, a way of mapping used by the people of the Marshall Islands, lie at the heart of the design, he said. The sidewalks will lead community members through the space, Jordan explained.

The design team held a contest looking for local artists to join the design team as details of the individual spaces take shape. Jordan introduced those as Daniel Hatch, Al "Papa Rap" Lopez and Reilly Dickens-Hoffman.

That first phase of design and phase two are funded by a Design Excellence Grant from the Walton Family Foundation.

The project should be well underway by 2023," said Ed Clifford, chief executive officer of the Jones Center.

The design team will continue its work, including construction drawings, while the Jones Center Foundation and staff lead a capital campaign, he said.

"And it's not just about transformation of the campus," said Kelly Kemp-McLintock, chief advancement officer of the Jones Center.

Leaders envision the new Jones Center as the eastern anchor of the downtown Springdale revitalization, she said.