COOKING FOR TWO: Giving toast a personalized touch with toppings 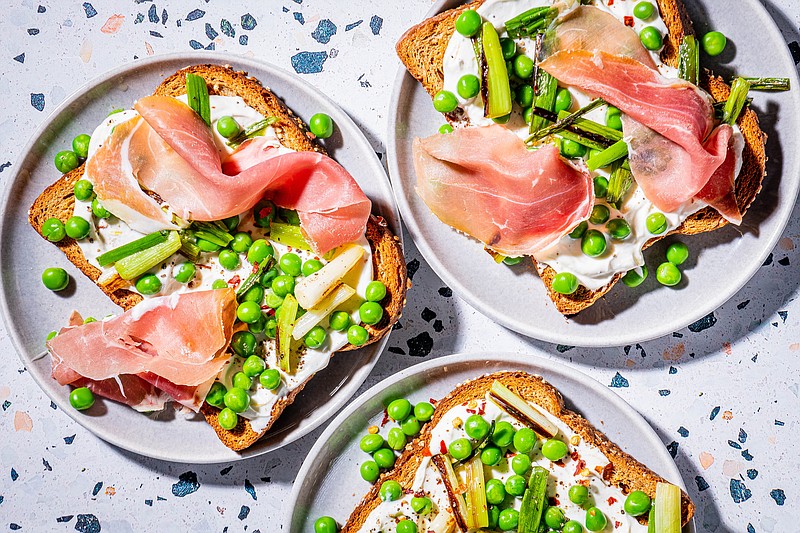 "Two little words. So much joy. I sometimes think 'on toast' might be the best two words in the world," writes Nigel Slater in his "Greenfeast: Autumn, Winter."

Slater goes on to outline his ideas about what makes great toast — "a thick wodge of golden bread under a pool of melted cheese" and "naan as a soft cushion" — and, spoiler alert: "There are no rules really. The toast should be thick enough to support whatever we put on top of it and it should be hot and freshly made. Other than that, we are surely free to mix and match toasts and toppings at will."

After meditating on Slater's poetic way with toast, I let myself daydream. I recalled the slices of toast that chef Missy Robbins serves, with blistered peppers, at her Brooklyn restaurant, Lilia. They are stubby things, thick with a piped squiggle of whipped ricotta. Presented as an appetizer, they look more like hunks of cake with a ribbon of frosting.

Whipping store-bought (or homemade) ricotta in a food processor produces a creamy, pillowy base for green vegetables. This recipe calls for frozen peas, but feel free to use fresh, shelled peas instead; they'll take a few more minutes to cook. Or you can substitute fennel, shelled fava beans, arugula or snap peas, quickly cooked or raw and crisp. Thin slices of prosciutto make a nice accompaniment, though aren't essential. Shaved parmesan, chile oil or a few drops of aged balsamic would be nice on top.

In a toaster or toaster oven, toast the bread.

In the bowl of a food processor, combine the ricotta, 1 teaspoon of lemon zest, honey, red pepper flakes, a pinch of salt and a few grinds of black pepper. Process until smooth and creamy, about 2 minutes. Taste, and adjust seasoning as desired.

In a medium skillet over high heat, warm the oil until it shimmers. Add the green onions and cook, using tongs to toss occasionally, until the stalks start to char, 2 to 3 minutes. Scrape onto a plate.

Return the skillet to high heat and add ½ cup water, followed by the frozen peas and another pinch of salt. Simmer until the peas turn bright green and the water evaporates, about 2 minutes. Remove from the heat and toss with the remaining lemon zest.

To assemble the toasts, use a spoon to divide the ricotta among the bread slices, spreading it into an even layer. Top with the peas, green onions and more black pepper and chile flakes, if desired. Serve topped with bits of prosciutto or with the prosciutto on the side, if desired.