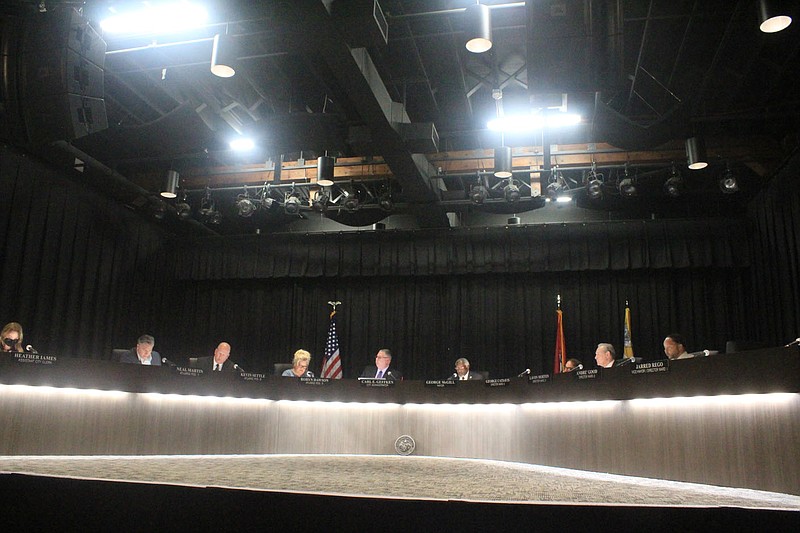 The Fort Smith Board of Directors is seen during a vote to amend the city's human resources language on Tuesday, July 20, 2021, at The Blue Lion

FORT SMITH -- The Board of Directors on Tuesday night unanimously voted to add language to its human resources policy protecting city employees on the basis of sexual orientation and gender identity.

It aligns the city with the U.S. Supreme Court's 2020 decision that the Civil Rights Act of 1964 protects LGBTQ employees.

The updated policy was put before the board in hopes of increasing the city's Municipal Equality Index score from the Human Rights Campaign, said City Administrator Carl Geffken. The city's 2020 score was 21 out of 100.

"Reports such as these are used by companies who would want to come here from around the country, and this is one way of showing and proving that Fort Smith is indeed a welcoming place," said Geffken.

Ward 1 Director Jarred Rego was absent from the Tuesday meeting.

Prior to Tuesday night, city code described harassment as "any annoying, persistent act or action" that singles out an employee based on race, skin color, religion, sex, national origin, handicap, disability and veteran status.

Forms of harassment include verbal abuse, interference with an employee's work, distribution of offensive materials, unwelcome intimate physical contact, offensive references, demanding favors as a condition for employment services and retaliation for reporting these behaviors, according to city code.

"The provisions of this policy will apply equally to all employees and applicants without regard to sexual orientation or gender identity," the language added to city Ordinance 85-11, which approves human resources policies for nonuniformed employees, states.

"Since we already do it, might as well write it," said Rick Lolley, city human resources director.

Geffken said the efforts to update city policy were made with the support of Mayor George McGill, who is also looking to increase Fort Smith's equality index.

Before the vote, At-Large City Director Neal Martin pointed out that the proposed language is "current law today" in light of the Supreme Court decision. He and Geffken agreed that the language codifies this law in its handbook for nonuniformed employees.

Of the eight cities in Arkansas surveyed by Human Rights Campaign, Fort Smith in 2020 had the fourth-highest rating equality index in the state behind Fayetteville (44), Eureka Springs (63) and Little Rock (66). The city received points for non-discrimination in employment, reporting hate crimes to the FBI and having elected or appointed leaders who are openly LGBTQ.

Geffken after the meeting said he will try to get Fort Smith to a score of 38 by taking a pro-equality position and hiring an LGBTQ liaison.

"The goal is to really just increase our points to really show that Fort Smith is a welcoming town, and that's important," he said.

The Human Rights Campaign in 2020 graded cities from all 50 states on equality for LGBTQ people.