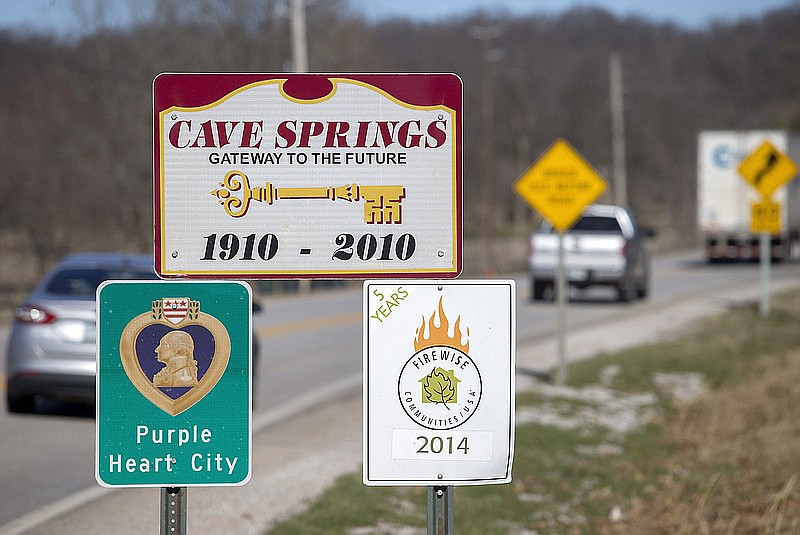 CAVE SPRINGS -- The state highway department envisions a new, four-lane Arkansas 112 going around the west side of Cave Springs, and that has a lot of residents wondering what economic impact it will have on businesses along the city's historic main street.

The issue arose in an Arkansas Department of Transportation public input session Tuesday evening to show residents updated plans for the highway between the Springdale Northern Bypass and West Wallis Road. Most residents in December said they favored the bypass option rather than either of two proposed alignments through downtown.

But the new alignment shown Tuesday would have the existing highway through town end with cul de sacs on either end rather than joining the new highway alignment north and south of the city. Access to downtown would come from street extensions to two roundabouts west of the city on the new highway.

Several people attending the virtual public input session voiced concerns about the continued economic vitality of the downtown, including Mayor Randall Noblett, who said a lot of residents have told him they're worried about not having connectivity on both ends of Main Street.

"The ability to be able to move up and down Main Street easily and on and off of this instead of going down to one end and having to circle all the way back to get back out is going to mean the difference in traffic going on Main Street, which is vital to the economics, or not having traffic on Main Street," Noblett said. "If we become harder to get into, we become another little town to pass by."

A proposed access road to the Northwest Arkansas National Airport is also expected to take traffic away from Cave Springs down the road.

Several residents asked whether the highway department will do an economic impact study; it won't.

Other concerns voiced Tuesday were about right-of-way and property acquisition and how some intersections will be changed, like Spring Ridge Drive. Residents said they'd like to be able to turn left and go south coming out of their street rather than having to go north and then double back.

Residents near Wager Road, south of Cave Springs, also expressed concern with the alignment and a roundabout there, which would take at least one house. Anita Lambert said she'd like the road moved farther west.

Ozark cave fish also came up. Highway officials said they're still working on the environmental study for the route and that will be published at a later date.

A final route for the highway will not be determined until after that environmental assessment is done, highway officials said. There will be a location and design meeting with residents at that time.

Construction of that portion of the road is not expected to begin until at least mid-2024 and will take two to three years, officials said.

A number of changes have been made to the plans since they were first unveiled in December.

The primary purpose of the work is to allow the road to carry significant local and regional traffic, according to the planning documents. Arkansas 112 is the only major north/south route through the metro region west of Interstate 49, which makes it critical for regional mobility as the area continues to grow, according to the document.

Bentonville and Fayetteville have already implemented raised medians, turn lanes, limited curb cuts, signal spacing and other access management strategies and those same strategies are expected all along the completed road.

The Transportation Department unveiled its plans in December. About 200 residents participated in the December meeting. Typical input sessions in Northwest Arkansas might draw a couple dozen people.

For anyone who missed the Monday session on improvements between U.S. 412 and the Springdale Northern Bypass or Tuesday's session, the meetings were recorded and will be available on the highway department's website to view.

The Arkansas Department of Transportation is conducting a virtual public involvement meeting for the Arkansas 112 widening project between West Wallis Road and Arkansas 12 on Thursday evening.

The online public meeting will consist of presenting and discussing the proposed design modifications. The meeting will be held from 5:30-6:30 p.m., and only project-specific material will be covered in the session. The website will be available for viewing through Aug. 6 at https://www.ardot.gov/publicmeetings . Comments will be accepted until 4:30 p.m. Aug. 6. For additional questions, contact: Karla Simms Advanced Public Involvement Specialist, (501) 569-2949 or [email protected]