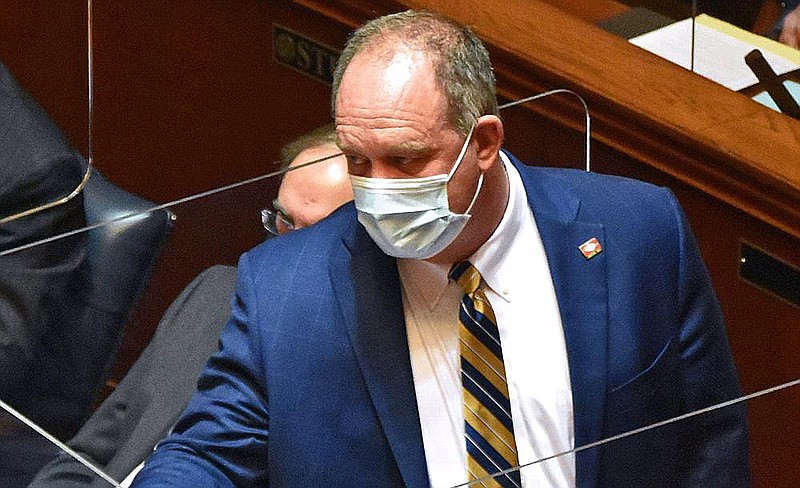 The counsel for Arkansas Tech University on Monday apologized to state lawmakers for the school bypassing the state Department of Finance and Administration before paying $1.1 million in emergency financial aid grants to students.

On another matter concerning the Russellville-based school, some lawmakers are upset over race-related materials given to high school students attending the Arkansas Governor's School, which the university hosts.

Senate President Pro Tempore Jimmy Hickey, R-Texarkana, said Arkansas Tech violated state law by not sending the American Rescue Plan funds to the state treasury and then having the treasury pay the school before the grants went to students.

On June 18, the Legislative Council approved Arkansas Tech's request for spending authority to use $1.1 million in the federal funds for emergency financial aid grants this summer. In March, President Joe Biden signed the $1.9 trillion American Rescue Plan into law to provide coronavirus aid.

At the behest of Hickey, the council's Performance Evaluation and Expenditure Review Committee on Monday declined to make a recommendation to the full council on Arkansas Tech's request for spending authority to use an additional $12.65 million in American Rescue Plan funds. The committee deferred action until Friday's council meeting.

And later Monday, at a different meeting, the council's Review Committee declined to make recommendations to the full council on two of Arkansas Tech's contract proposals and a proposed Arkansas Tech renovation project, deferring action until Friday's council meeting.

After the Review Committee meeting, state Rep. Jim Dotson, R-Bentonville, who proposed deferring action on one of Arkansas Tech's proposals, said, "I think it has to do with the paper that they were teaching at the Governor's School possibly.

"I think it was called the white privilege paper," he said.

Arkansas Tech spokesman Sam Strasner said Monday night that the paper in question is titled, "White Privilege: Unpacking the Invisible Knapsack," and was written in 1988 by Peggy McIntosh.

The paper was included as optional classroom material for this summer's Governor's School because of its position as a topical origin document concerning a contemporary issue, he said in a written statement.

Governor's School co-directors and faculty have been in review of and responsive to the concerns expressed, Strasner said.

As a balance point to the McIntosh article, an additional optional classroom material titled, "The Perils of Associating 'White' with 'Privilege' in the Classroom," by Ritika Goel, was also made available to students to ensure that multiple viewpoints were available for possible classroom use, he said.

"Like many other topics at AGS and at governor's schools around the country, these optional classroom materials were made available as a means of helping students develop the capacity to formulate their own points of view and engage in civil discourse," Strasner wrote.

He said the approach is consistent with the rules governing the site selection for the Governor's School.

The school is funded through a grant administered by the Arkansas Department of Education, Strasner said.

About 370 students are attending the school this summer, which concludes Aug. 1, he said.

Last week, 33 House Republicans and 10 Senate Republicans sent identical letters to state Department of Education Secretary Johnny Key in which they expressed concerns about the school's curriculum and agenda this year.

They asked in their letters that the Department of Education halt "prejudiced rhetoric and teaching of radical theories immediately" and find alternate instruction.

"We believe that the teaching of racist or hateful theory through the spending of taxpayer dollars is a disservice to our students and a misuse of the public trust," they wrote. "We cannot allow or encourage further division based on factors such as race, gender, or socioeconomic background" in a time of increased political polarity.

In a written response to Sen. Kim Hammer, R-Benton, whose letterhead was used for the senators' letter, Key said he was aware of the concerns expressed by the members during "the recent session" regarding the teaching of racially prejudiced or hateful theories.

He said the rules governing the school's site selection are "very general" with respect to curriculum and programming and don't give the department authority to develop or prepare the materials. That process is conducted by the host institution, he said.

"Without explicit authority granted by the General Assembly to oversee curriculum of Arkansas Governor's School, I would be hesitant to demand Arkansas Tech make immediate changes in the curriculum out of concern for possible executive branch overreach," Key wrote.

He added that the department "does not support the teachings of topics that purport to indoctrinate students in racist or hateful theories and other concepts that are subversive to the best ideals of our nation," and that he looked forward to working with Hammer to make regulatory or statutory changes to ensure the Governor's School provides a positive experience for students.

In response to a question from Hickey, Pennington told lawmakers the university received an American Rescue Plan grant totaling about $22 million and most institutions received those funds about May 12.

Under the federal rules, "we have to at least draw down some of that money from what they call the G5 by Aug. 10 or we lose potentially the $22 million," he told the Performance Evaluation and Expenditure Review Committee. G5 is the federal system that the state Department of Education and colleges and universities use to draw federal funding, according to the finance department.

"One of the things that I did as the principal investigator was rush and we were here last month with a $1.1 million request to use the American Rescue Plan funds to distribute as an emergency grant to students," Pennington said.

After May 12 and prior to the council's Performance Evaluation and Expenditure Review Committee meeting on June 15, the state Department of Finance and Administration had a conference call with each of the state's colleges and universities and detailed the procedure for drawing down that money, he said.

"First we come to [the committee] and then it goes to [the Legislative Council] and then the way the process was supposed to work ... is that we would incur the expense, so have the money ready to go, wire it to DF&A and DF&A would turn around and wire it back to us," Pennington said.

Arkansas Tech sent the funds to the money to the students after an application process and "then we were going to draw down the funds from G5," he said.

"What should have happened is that we get the money ready to go out to the students, then we pull down from G5, send it to DF&A, DF&A sends it back to us and then we release the money to the students," Pennington said, "so there has been no misappropriation of funds."

But Arkansas Tech did not follow the finance department's process, he said, and he apologized to the committee for that.

Hickey said the Legislature enacted a law to require state agencies and colleges and universities to provide a detailed plan on how they plan to spend American Rescue Plan funds and also require the finance department to report to lawmakers on where the money was spent, so "that process is what was bypassed."

"I see it as a violation of state law," he said. "This state doesn't operate unless we all follow those, whether we like them or not."

The checks were sent out to students on a Friday and then a few days later Arkansas Tech reached out to the state Department of Finance and Administration and "they realized the gravity of that mistake," Pennington said.

Arkansas Tech was the first state higher education institution to try to draw down American Rescue Plan funds and "we messed it up and I am here to acknowledge that error and I'd ask the university not be punished for this isolated mistake," he said.

"I am asking for the mercy of the committee in which we got the cart before the horse," Pennington said.