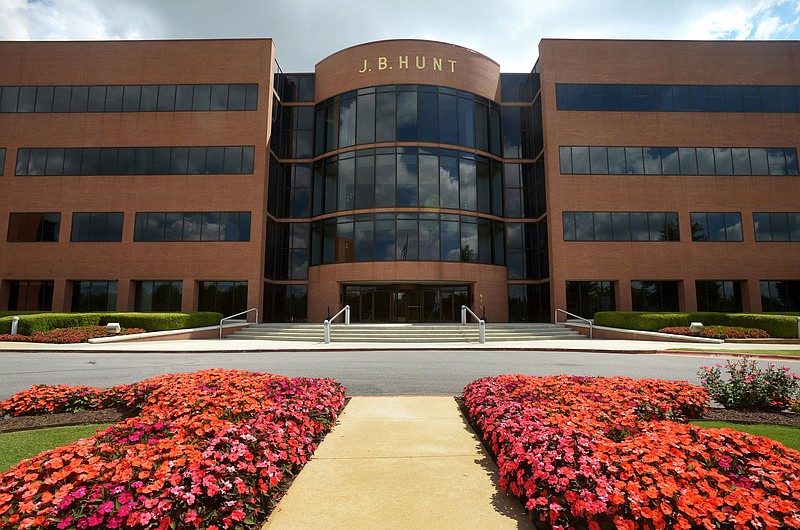 A view of the main entrance Thursday, July 6, 2017, at the J.B. Hunt Transport headquarters in Lowell. (NWA Democrat-Gazette/BEN GOFF)

J.B. Hunt Transport Services Inc. on Monday reported a second-quarter profit of $172.2 million, a 41% gain from a year ago.

Revenue rose 35% to $2.91 billion compared with the same quarter last year. All of J.B. Hunt's business segments reported at least double-digit growth in the three months that ended in June.

The Lowell-based trucking and logistics provider attributed its profitability to customer rate and cost recovery efforts, higher volumes, technology investments, higher productivity and a $3.2 million benefit from a settlement of claims in its final-mile business.

Meanwhile, J.B. Hunt had increased costs and expenses that ate into results, including higher driver wages and a lack of network fluidity from rail and customer activity in its largest business segment.

Despite these challenges, J.B. Hunt executives said in a conference call how pleased they were with each business segment during the quarter.

After a year of delays and setbacks brought on by the coronavirus pandemic, J.B. Hunt began to turn it around in 2021, recording strong profit and revenue growth for the first time since the pandemic began.

With consecutive growth in its second quarter, the company can build on its current momentum, said John Roberts, J.B. Hunt's president and chief executive officer.

Intermodal, which accounts for about half of the business, had strong demand that was offset by restrictions from rail service providers related to labor shortages, car imbalances and other challenges. With these issues in mind, J.B. Hunt generated Intermodal revenue of $1.29 billion, a 21% increase from last year. Segment income rose 26% to $133.6 million.

Integrated Capacity Solutions, a non-asset-based business, generated segment revenue of $607 million, up 100% from last year, because of increased volumes and higher contractual and spot rates. Revenue per load surged 66%.

Segment income was $3.1 million compared with a net loss of $13.1 million.

Meanwhile, segment income fell 5% to $79 million because of increases in driver and employee wages, among other costs.

Final Mile Services generated segment revenue of $212 million, up 52% as more customer contracts were secured. The segment, which does delivery of big and bulky goods to residences, dealt with temporary covid-19 suspensions.

Final Mile income was $10.7 million compared to a net loss of $5.2 million in the same quarter last year.

The Truckload segment generated revenue of $184 million, up 70% as more customers became acclimated to J.B. Hunt 360, a digital platform that gives users access to drop-trailer capacity across the company's network.

"Overall, this looks like a solid quarter," Justin Long, a Stephens transportation analyst, said in a research note Monday.

Results beat Stephens earnings estimate of $1.57 per share. Other analysts expected $1.58, according to a FactSet consensus.

"Looking ahead, the momentum in intermodal pricing, new dedicated contracts and the inflection in [Integrated Capacity Solutions] profitability all set the stage for momentum to build," Long added.

Regarding cash flow, J.B. Hunt had $1.3 billion left to pay on various debt instruments at the end of the quarter.

Net capital expenditures were $261 million and J.B. Hunt had $571 million in cash on hand.

The company spent $81 million to repurchase 484,000 of its own shares during the quarter.