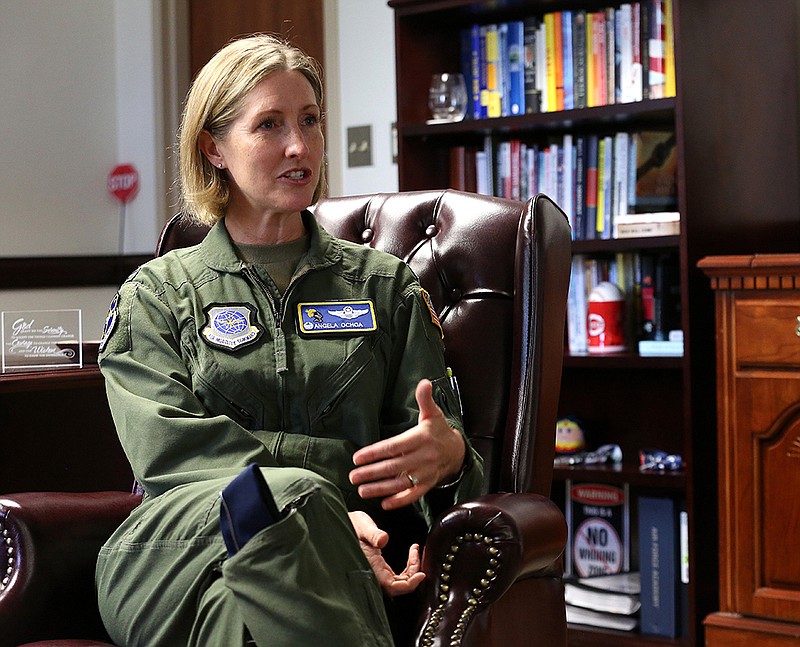 Col. Angela Ochoa said she is living her dream as the new 19th Airlift Wing commander, the first woman to assume command at Little Rock Air Force Base.

The wing provides mission-ready airmen and supports the largest C-130 fleet in the world.

As the base commander, Ochoa works in all aspects of C-130 aircraft training together with the other airlift wings on the base and the 29th Weapons Squadron. She is responsible for organizing, training, and equipping those who operate, maintain and sustain more than 62 C-130 aircraft.

Since taking the helm June 25, Ochoa has been hard at work learning the ropes, but said she started prepping right away after she first got the call in October.

She went to training and, "also a lot of self study and self reflection to mentally prepare for the role so that I'm ready day one. Coming in to an Air Force base like Little Rock Air Force Base and to a wing like the 19th Airlift Wing, it's like jumping on a moving train. We are moving fast and it doesn't stop when commanders change out," she said. "The mission never stops."

The summer between her junior and senior year of high school, Ochoa said she traveled from her Lakeside Park, Ky., home to attend a one-week program at the Air Force Academy in Colorado Springs, Colo. She went after a neighbor who was an Air Force recruiter persuaded her to check it out, saying it would look good on a college application.

It was the dedication and focus on one mission Ochoa witnessed there that persuaded her to join the Air Force, she said.

Ochoa returned to the academy to earn a Bachelor of Science degree in biological sciences in 2001. She wasn't sure exactly what she was getting into, but was excited and, as the oldest of four siblings, felt this guaranteed-free option was best for her family, she said.

She has continued her education, graduating with a Master of Science in Exercise Science from the California University of Pennsylvania in 2008 and Master of Policy Management from Georgetown University in 2014. She also completed Squadron Officer School in 2007, Air Command and Staff College in 2011 and Air War College just last year.

She found her direction her junior year at the academy when Gen. Mark Welsh, now retired, gave a talk about his combat and life experience.

"It really made an impact on me. I distinctly remember walking out of Arnold Hall that night thinking to myself, 'Well maybe I'll try this pilot thing,'" she said, "and that was it."

She has taken 11 different assignments lasting from less than a year to around three, such as an aircraft commander in Alaska, an Air Force Fellow in Washington, D.C., and a commander of an airlift squadron in Bagram Airfield, Afghanistan.

Ochoa said she shares the stories of her neighbor and Welsh's talk often, reflecting on the weight connections like those, even if fleeting, can have on someone's life.

"It's interesting -- those little moments in time, that one person," she said. "It's just a good reminder for all of us that every engagement [you] have with somebody can leave a lasting impact. They left one on me, or I wouldn't be here today."

As wing commander, she is accountable for ensuring the readiness and well-being of more than 10,000 personnel and families at the base.

Nurturing a connected community where everyone is cared for and feels they belong is one of three main focal points Ochoa laid out in her Commander's Intent she sent out to the wing. She said this is especially important as the base rebuilds that sense of community that, like everywhere else, took a hit during the covid-19 pandemic.

Lt. Col. Mike Trimble -- now commander of 19th Operational Support Squadron -- served in the 61st Airlift Squadron on the Little Rock base during Ochoa's command of the unit, which was from June 2016 to April 2018. Ochoa had an immediate impact on the squadron with her ability to connect and motivate, Trimble said.

"That connection really struck me. I was only under her command that time for a couple of months, but because of the impression she made on me and her generosity as a person, I kept in touch with her as I moved on and she continued to ascend the ranks," he said. "She would make the time for my call, time to mentor me and help me with career decisions."

Trimble said Ochoa is also known for having high standards and attention to detail both at home and in combat.

The other two focal points Ochoa laid out are growing courageous leaders who cultivate a culture of trust, dignity, and respect; and developing mobility warriors of character who are battle ready and are disciplined in the fundamentals, and push through barriers.

"If we don't have courageous leaders, we will fail. We have to make sure our leaders today are prepared for the fight tomorrow," Ochoa said. "We need to continue to develop mobility warriors... that take risk, that are bold and continuing to move the ball forward... That means we're going to fail sometimes. And that's OK. We will learn through that failure. I believe in a fail forward mentality."

Ochoa is someone who has strived for leadership opportunities throughout her career, but said she had to learn to seize every opportunity. She worked hard and never closed any doors but was passive in the beginning of her career. In writing, she has talked about the time she spent early on trying to fit into a culture where she was the minority as a female pilot.

"By not putting myself forward and out there, I potentially missed some opportunities. It goes into the idea of claiming a seat at the table. There were times I could have demanded more or asked for more and I didn't," she said. "I would tell young airmen that this Air Force is full of opportunities and ask to be a part of them. ... Go after it and get it."

She looked up at leadership and didn't see someone like her, but she learned she couldn't let that stop her. She said it took looking out and within, instead of up, to get to the place she is today.

"We have to see the strength within ourselves and be that change in our organizations," she said. "We can't continue to look up for that change. We have to recognize it within and then look out, because all around us we have leaders with very diverse views and opinions and we need to recognize that in our peer set and even below us."

She hopes to impart this message to young people, especially her daughters. Her 10-year-old daughter Elsa wants to become a pilot. Seanna, 8, is undecided on her career path, Ochoa joked.

This is her third assignment at the Little Rock base and for her and her family it feels in a lot of ways like coming home, she said. Her oldest daughter was born at Baptist Health Center and proudly calls herself an Arkansan, Ochoa said.

"We love this area. We love Arkansas and Little Rock," she said.

She spends all the time she can outside of work with her daughters and husband, Raul.

During the covid-19 lockdown, she taught her girls self-reliance through meal planning and cooking. Both were responsible for a meal each week.

Wednesday, Ochoa celebrated her 20th anniversary with Raul, whom she met the first day at the Air Force Academy. The whole family went out for a swim and and ice cream.

Ochoa's focus on service, family and faith is rooted in her own upbringing, she said.

"My dad used to always say he didn't care what I did as long I did it with heart and in service to God and others," she said. "I stumbled into the military and I kind of stumbled into flying aircraft and fell in love with it... Now, I do believe it is a calling I'm living out."