NWA EDITORIAL: Northwest Arkansas is on the rise 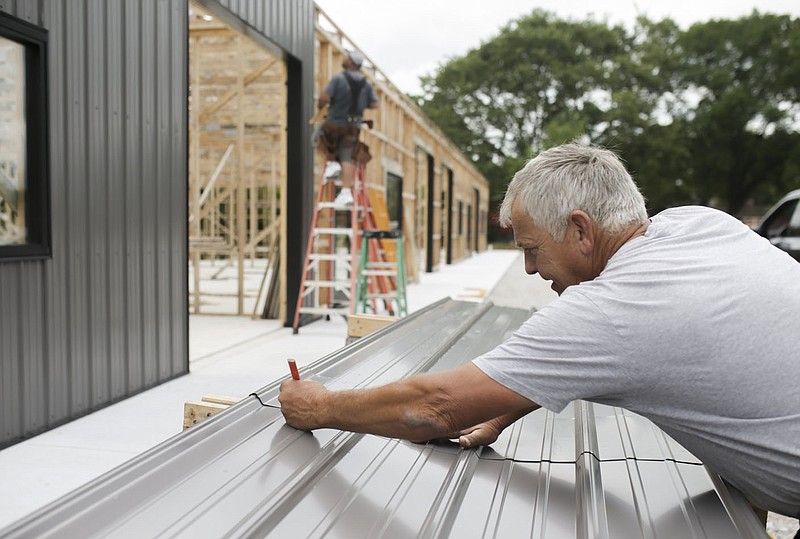 Raymond Barett of Bentonville measures a sheet of metal to cover the frame of a building, Monday, July 12, 2021 at a private property along Springvalley Rd. in Bentonville. Raymond Barett is building properties to lease out to private businesses as an income source. Check out nwaonline.com/210713Daily/ for today's photo gallery. (NWA Democrat-Gazette/Charlie Kaijo)

When word arrives in any newsroom that a local community or region has earned a spot on a "best of" or "worst of" list, a discussion almost always follows: Is this news?

Anyone can make up a list. Plenty do. And people love lists because they're sometimes helpful and because they're sometimes worth a bit of friendly (mostly) banter. It's essentially like the AP Top 25 in football or basketball -- they can be argued about or debated all day long. But did Texas A&M really deserve to be ranked higher than Notre Dame? Talk amongst yourselves ...

Tourism promoters love it when their towns or regions are listed in positive ways. They know enthusiasts of all sorts will snap up specialty magazines that include rankings of the best or worst, related to their particular interests. Here at the paper, we get notifications all the time about some outfit declaring Northwest Arkansas or one of its cities the Xth most desirable place to (insert activity here).

It gets pretty ludicrous at times, what people who create lists will create lists about. Bee-keeping? Tattoos? Quilt-making? You name it, there's probably a list of the best places to do it.

Some of these lists have more significance than others. Northwest Arkansas, for example, is enjoying some highfalutin rankings in the mountain biking world because a couple of the Waltons and some local communities decided to make serious investments in the kinds of trails enthusiasts of the sport appreciate. It's a big enough deal to occasionally be news because of the economic impacts it's had and will have on the region.

Whether these things are newsworthy often depends on who is making the list and why, as well as how solid the criteria behind the rankings are. Just because some sweatpants-wearing blogger in a basement someplace conjures a list doesn't make it news.

But perhaps one of the most-coveted designations for any region or community is to make it high on a list of best places to live.

Last week word came down from U.S. News and World Report -- a reputable magazine that would probably be at or near the top of any list of publications that makes lists -- that the Northwest Arkansas metro area has passed Austin, Texas, to claim the No. 4 spot in the annual "Best Places to Live" survey.

And suddenly, the job of all the copy writers for ads touting Northwest Arkansas got a little easier.

The magazine's list is, of course, a promotional gold mine, the kind of national exposure the region can't buy. It creates an opening for a lot of conversations with people who are thinking about a visit or, even better in some estimations, relocation. Where in the past their reactions might have been "Come on, Northwest Arkansas?" the attention from the magazine's rankings might just change the response to "Wow, maybe Northwest Arkansas."

It's a moment of celebration for those working to make Northwest Arkansas an attractive place for employers and for a workforce the growing region needs today and in the future. But the folks who devote a lot of their time and energy to developing and promoting the components that help make Northwest Arkansas a "best place" know the title can be fleeting and the effects from growth can, if not managed well, can become a detriment to the future.

Just ask Austin, Texas. Nobody in Northwest Arkansas is celebrating the Texas capital's descent on U.S. News and World Report's list. The question for our region is how to avoid the burdens that, sooner or later, sock it to these rapidly growing communities.

Mervin Jebaraj, director of the University of Arkansas' Center for Business and Economic Research, took note that higher housing prices and long commute times factored into Austin's relative decline in the ratings.

Can Northwest Arkansas figure out a way to navigate its good fortunes without allowing their effects to become a big, wet blanket on what the region wants for the future?

The good news is a lot of the region's leaders recognize the trap. The private Northwest Arkansas Council, an organization of business leaders, is focused on issues such as housing affordability along with the influential Walton Family Foundation.

Beyond affordability, hopefully Northwest Arkansas can grow the average on the region's wages, so that more people can afford to live, work and play here. Some companies don't like such talk, but taking care of employees is also investing in the region's well-being.

Mass transit must also improve, giving people in the more urban areas options other than getting into personal vehicles for every single trip around town or from one town to the next.

Maintaining great schools and making improvements as needed will be important.

Diversification of businesses is vital, as are the kinds of housing to be built. How do we maintain the look and feel that so many Northwest Arkansas residents love while also addressing the fact the cities and towns can't just keep spreading across the region's landscape? If that's how the region grows, we will indeed choke on our own growth.

All in all, Northwest Arkansas has every reason to enjoy its moment in the spotlight and to hope for more in the years ahead. But every public official, business leader and resident needs to look for opportunities to become engaged in the region's growth decisions, to ensure the "best places" designations keep rolling in.

The region’s ranking as a “best place to live” is a prize, but also a warning for the future.

Print Headline: On the rise