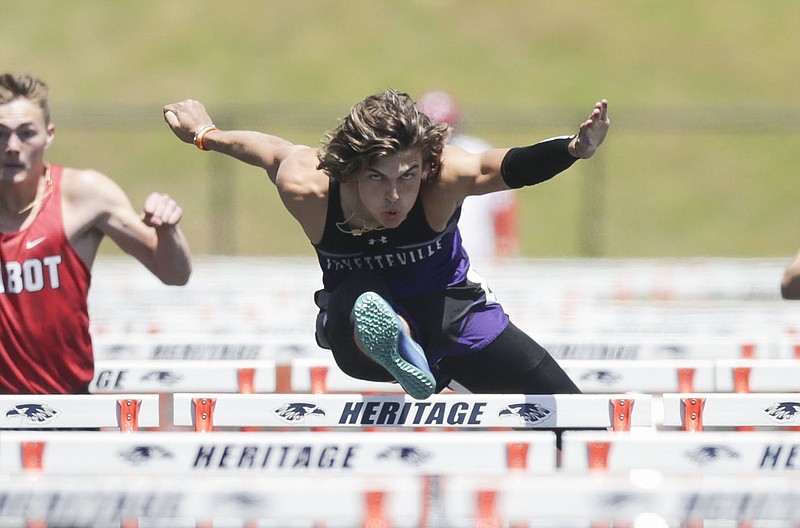 Fayetteville's Sam Hurley runs the 110 meter hurdles, Thursday, May 6, 2021 during the 6A State track and field meet at Heritage High School in Rogers. Check out nwaonline.com/210507Daily/ for today's photo gallery. (NWA Democrat-Gazette/Charlie Kaijo)

FAYETTEVILLE -- Sam Hurley is only one year away from being able to use his name, image and likeness for personal profit like other college athletes since the NCAA recently approved the measure.

It's a time the Fayetteville track and field standout can't wait for, especially since he has become a social-media sensation over the past three years.

"I've thought about it a lot," Hurley said last week. "Probably every day, honestly. I think that a big part of where I decide to go to college will be included with the whole NIL deal.

Hurley is active on many of the popular social-media platforms and has loads of followers on each of them. On TikTok, Hurley currently has 3.7 million -- that's right, million -- followers of his short video presentations.

This has all taken place since he started using the app around December 2018 when he was a freshman at Fayetteville High School.

Hurley reached 100,000 followers in a couple of months, and it quickly became 1 million, then 2 million and finally 3 million followers in a short time. He credits the success to the hard work and dedication he has put into what he calls "doing the right thing at the right time."

"I've been making videos ever since I was a little kid," Hurley said. "Whenever TikTok came out, I started posting videos on that. Eventually, it blew up and everybody started seeing it, which made me just grow and grow. TikTok is a crazy app, and I hopped onto it at the right time.

"I wasn't doing it for the followers. I started doing it because I love videos, and it was a hobby of mine. It makes no sense, honestly, but I'm forever grateful for it."

Videos of Hurley dancing and lip-synching to popular songs -- either by himself or with the help of friends -- have well exceeded 1 million views on a regular basis on TikTok. He said that he doesn't have a certain topic on his videos, and most of them come off the top of his head.

He's also done videos of himself as he rides a skateboard in a local park, and there is one where he plays a game with friends that's called "egg roulette," where a person spins a bottle and the person the bottle points out must grab an egg out of a carton and throw it at the other players as they run away. He even has one where he acts like he is playing "Family Feud."

"Most of the videos don't have a whole lot of meaning or a whole lot of purpose," Hurley said. "They're intended to maybe help your day or make your day a little happier.

"I don't care who it is that's following me. As long as they're watching me and I'm making them happy, that's all that matters.

"There are a couple of more celebrity-type people that follow me that I've looked up to, and I think that's super crazy. Whenever they started following me, I fanboyed it a little bit. Besides that, anybody who follows me, I'm excited about it."

Hurley also has an impressive following when it comes to his track and field achievements. He won three events -- the pole vault, high jump and long jump -- in the Class 6A state track and field championships and won the Arkansas high school boys decathlon, which led to him recently being named the Northwest Arkansas Democrat-Gazette boys track athlete of the year and the Arkansas track athlete of the year by Gatorade.

He has not committed to a college yet, but he said he has shown interest in UCLA, Arkansas, Texas, TCU, Stanford, Duke and "a couple of others." His final decision could be determined by how much of a role the NIL will play while he attends college.

"I'm getting quite a bit of attention," Hurley said. "I'm probably on the phone every day with different coaches across the country. I don't have anybody in any particular order right now.

"With this NIL passing, I'm sure each college will have a different kind of NIL cap. I think that will help me decide where I eventually end up going."

m Here are the number of followers Fayetteville senior track and field standout Sam Hurley has on his social media accounts as of Thursday: