Back on the White: Great day to break the coronavirus blues 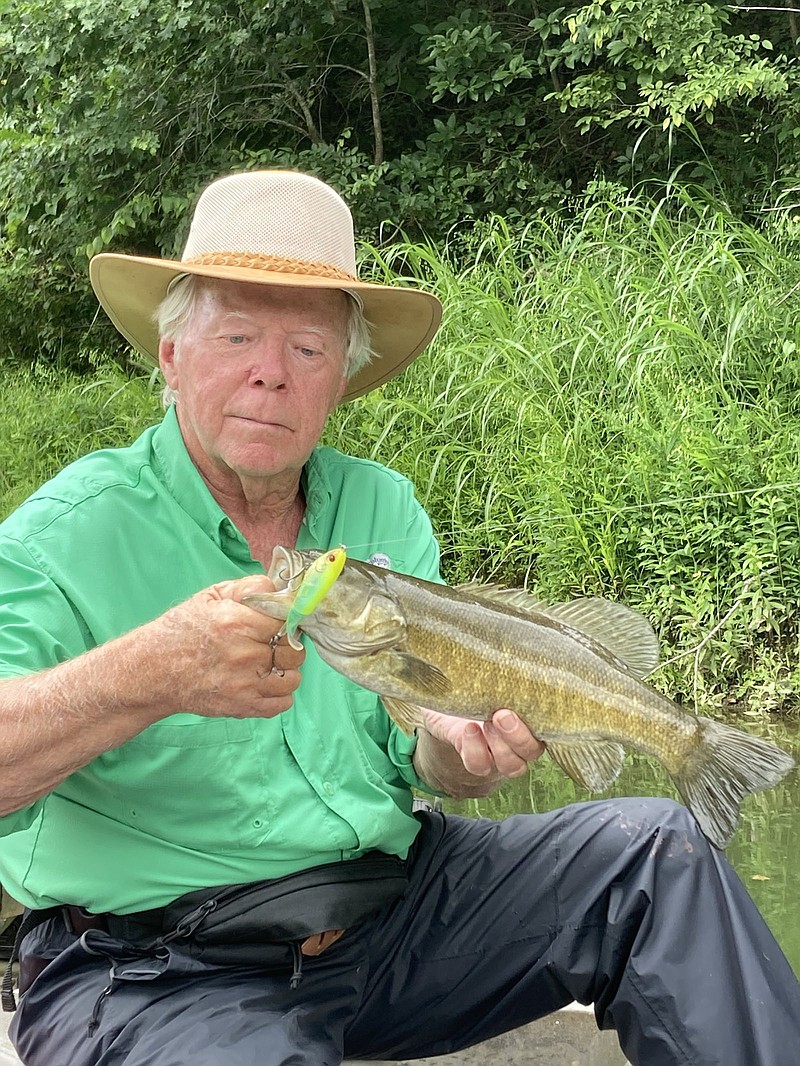 Monday was a perfect day to end a coronavirus exile.

It was better than that. Monday was a perfect day to be alive.

The last time Ray Tucker and I fished together was in the fall of 2019. We used to fish together at least twice a month, but Tucker took social distancing very seriously during the coronavirus pandemic, even after being vaccinated.

He finally had all the isolation he could stand. He was eager to fish.

[Video not showing up above? Click here to watch » arkansasonline.com/718fishing/]

Despite nonstop high water, or maybe because of it, trout fishing has been very good on the White River this year. I was also eager to run my boat after rebuilding the carburetors on my 25-horsepower Yamaha outboard during the winter, so we massed our trout gear for a trip north.

After raining all weekend in Central Arkansas, the weather was supposed to be clear, but rain follows Tucker and me wherever we go. The sky darkened as we drove north on U.S. 65, and Tucker grew alarmed when I passed the turn to Mountain View, our usual destination for White River trout fishing.

"I have a 'big fish' spot I want to show you near Shoestring Shoal," I said. "If it's unfishable, we can try our luck at the mouth of Crooked Creek."

"You're going to put this boat in Crooked Creek?" Tucker asked. "It's barely big enough to float a canoe."

"No," I said. "We're going to launch on the White. Crooked Creek enters the White between Shoestring Shoal and Rim Shoal. Trout get in there, and I've caught some big ones when the White was too wild."

The sky was leaden and low when we arrived at the Ranchette Access. The parking lot was full of trailers, but their owners were all coming home.

"Big storm on the way," said one of the anglers. "Y'all be careful out there."

Tucker was confident because he brought his rain gear. As usual, I did not.

Tucker muttered unprintables as he counted off all the times I'd endured torrential downpours without the benefit of rain gear.

"That's only when we fish down south," I said. "We always seem to get away from the storms when we fish up here."

Although I tested my motor before leaving home, I was immensely relieved when it started effortlessly at the ramp. I throttled down and roared upstream to the tail of my favorite shoal, where I tossed a Luck-E-Strike Rick Clunn stickbait behind the boat. No sooner did I close the bail when I felt hard tugs.

In low water, the entire shoal is exposed, leaving only a narrow channel between the Ranchette Hole and the deep hole above.

"During our first January trip many years ago, I came out here at sunset with Bill Eldridge and Rusty Pruitt," I said. "Lord, it was cold. Eldridge anchored in this channel and hooked a great big trout that broke him off. It broke his heart, too. He still talks about it."

My first-cast trout was a 16-inch rainbow. I made the mistake of landing it in a net of fine mesh, which caused such a hopeless mess that I had to cut the bottom out of the net with a knife. That required beaching the boat, which forced Tucker to fish out of the current. He made a long cast to the current seam, and a big fish hit at the edge of the calm water. It was a 18-inch brown trout.

After extricating myself from the net fiasco, I caught three more rainbows, including another that was about 15-16 inches.

Tucker kept talking about our trip on the White River three years ago, when we ended the day in the North Fork of Sylamore Creek. We didn't catch any trout, but we finished with a frenetic flurry of smallmouth bass action on topwater lures.

Minutes later, we were at the mouth of Crooked Creek.

"There used to be a gravel bar that stretched out into the White," I said. "Eldridge and Ed Kubler beached their boat and fished in the eddy behind it one day and slayed the trout for hours."

We entered Crooked Creek from the deep cut on the upstream side and trolled stickbaits to no avail in the deep hole at the mouth. We continued upstream and were astonished to find big schools of smallmouth bass cruising around just like the ones we found in Sylamore Creek. I threw out a Zoom Mini Brush Hawg and Tucker threw a Whopper Plopper in what is best described as mahi-mahi color. A big fish slammed the Whopper Plopper at the same moment another one hit my Brush Hawg. Tucker's smallmouth weighed a bit under 3 pounds, which gave him big fish honors for two species.

We also encountered two young men from Gassville who were bowfishing for carp. They said they use carp to bait their crawdad traps. One of the guys finally arrowed a big carp, but while the shooter was trying to display the fish for a photo, it struggled free and escaped.

"It was cutting into my hands," he complained.

Hungry, we beached the boat on a gravel bar, and Tucker produced a magnificent shore lunch of broiled shrimp and pimento cheese, the same recipe used at Augusta National Golf Course. I was traumatized at an early age by the awful goop from a plastic bucket that passed as pimento cheese in my childhood, but I am courageous. Ray's version was sublime.

As we had hoped, the storm skirted us to the southeast. The sun broke free to reveal a deep azure sky dotted with thick, cottony clouds. The temperature was cool behind a gentle zephyr.

"This feels like an early October day," I said, as Tucker nodded. "I'll take this over 100 degrees anytime."

After lunch, when it was obvious the smallmouths had quit biting, we re-entered the White River. Going as slow as I could against the current, I trolled a blue/silver Lucky Craft Pointer SP, one of my best lures for catching big brown trout.

As expected, a big fish slammed the lure as it came through an eddy. The fish stripped line, but my drag was set a little too tight. As I turned the boat into the current to follow the fish, it surged violently and snapped the loop that held the line to the eyelet.

"That'll teach me," I said, dejectedly. "From now on, I'm using a braided leader. A big fish against an eight-generator current is more than this 6-pound line can handle."

"More than OK," I said. "Ray, this is the best day I have had in a long time. The weather is perfect. The fishing is great. The company's great. I couldn't have asked for more. Let's bottle up the rest of it and save it for later."

Tucker nodded enthusiastically and said, "You worried me there for a minute. Usually you won't leave until it's dark."

"That time will come again, Ray, but it won't get any better than it is right now," I said. "Welcome back, man. I've missed fishing with you."

Print Headline: Back on the White