At 25%, Sebastian County lags in vaccinations 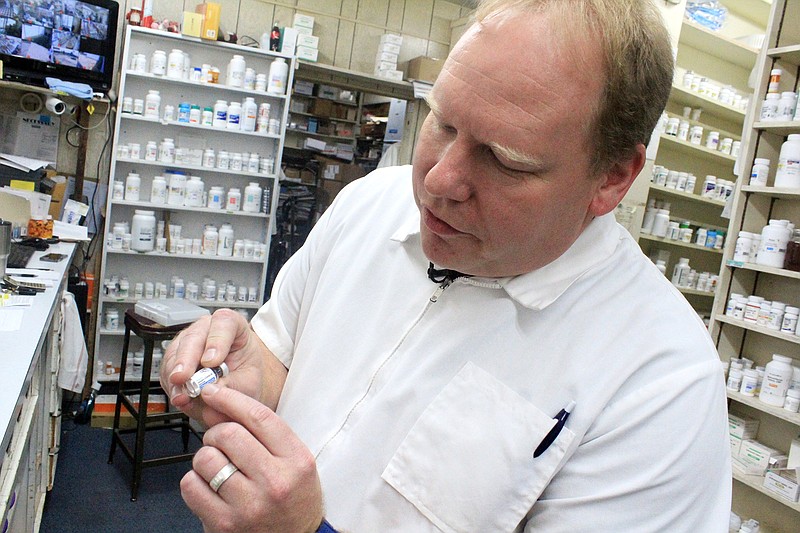 FORT SMITH -- Sebastian County is the fourth-most-populated county in the state, but only a little more than 25% of its residents were fully vaccinated against covid-19 as of Friday, according to the federal Centers for Disease Control and Prevention.

The U.S. Census Bureau estimates that 127,827 people live Sebastian County, most of them in Fort Smith.

The county's 25% rate is about 10% lower than Arkansas' overall 35% fully vaccinated rate, which itself is higher only than that of Alabama and Mississippi, according to data compiled by the Mayo Clinic.

The county's rate remains low as the delta variant of covid-19 races through the state. The variant spreads more easily and quickly than other variants, according to authorities.

The state Friday had 9,750 active covid-19 cases, including 241 in Sebastian County, according to the Arkansas Department of Health.

Dr. Lee Johnson, who is also a state representative and medical director of Fort Smith EMS, said the local case rate is tied to many factors, including the number of people who might have the virus, but aren't getting tested.

Sebastian County had 48 hospitalizations, including 20 intensive care unit patients Friday. Johnson said the number is comparable to where the county was exactly a year ago, before vaccines was available to the public.

"Our hospital is already stretched," said Dr. Paul Bean, chief of medical affairs at Mercy Fort Smith. "Adding these patients who have lengthy hospitalizations and utilize resources at a high rate will greatly strain our facilities."

Additionally, Arkansas' average age for hospitalizations and deaths from the virus have both dropped about 10 years, Johnson said.

"This is not the same covid that we're seeing a year ago. This is a different entity. This is making people sicker. It's striking younger people. It's got a high hospitalization rate," Johnson said.

All Arkansans 12 and older are eligible to get the vaccine, according to the Arkansas Department of Health.

Daniel Lunsford, owner of Prince Pharmacy in Fort Smith, said he's seen a drastic decrease since March in people wanting to get vaccinated.

"With the increase of number of cases, I think people are ... reevaluating whether they need to get the vaccine," he said.

Boyd said the politicization of the vaccines is a reason for hesitancy and has "made it hard to trust that you're getting good information."

Johnson said complacency is another reason for the low rate.

"It's this idea that, we were seeing the numbers go down a few months ago, and people felt like this pandemic was passed, and the truth is, it's not -- it's raging on right now, and it's more important now than ever to get vaccinated," he said.

Sebastian County residents cite still reasons for not getting vaccinated.

Sarah McTyre, who lives in Fort Smith with her husband and children, said the vaccine is "too new" for her to get. She said she's weighing the side effects -- which include headaches, muscle pain, chills, fever, fatigue and nausea -- against the odds of getting sick.

"Time and real data" would persuade her to get the vaccine, she said, adding that she trusts a doctor's recommendation over that of government officials.

While Johnson acknowledged that there aren't any long-term studies on the vaccine, he said a large cohort of people vaccinated in the past six months seems to be doing fine. He said the risk of covid-19 -- particularly the delta variant -- exceeds the risks associated with the vaccine.

Lunsford recommended that people get the vaccine on a Friday so they have the weekend for any side effects to subside.

Derek Baker, who also lives in Fort Smith, said the vaccine hasn't been fully approved by the Food and Drug Administration. The FDA has approved the vaccines for emergency use and are under "the most intensive safety monitoring in U.S. history," according to the CDC.

Lunsford said he has heard this concern, but "at this point, it's been researched, it's been given to the world population, and it's had pretty good results with low side effects."

Gage Carson, a plumber in Fort Smith, said he would be more persuaded to get vaccinated if leading health officials would acknowledge that hydroxychloroquine and ivermectin were "possible treatments" for the virus.

Johnson said there's anecdotal evidence that these medications have been helpful in isolated cases, but there isn't enough research yet for them to be used widely against the virus.

The vaccine, on the other hand, has been studied in tens of thousands of people, Johnson said.

Carson called the vaccine "gene therapy" because of its mRNA mechanism. These vaccines teach cells how to make a protein, which triggers an immune response in the recipient's body.

Johnson said this kind of vaccine science has been researched since the first SARS coronavirus outbreak in the early 2000s.

"This is a technology that's been heavily studied -- it's just that this is the first opportunity we've had to utilize this technology in a widespread vaccine," he said.

Carson added that it's not his obligation to worry about accidentally passing the virus to someone who hasn't been vaccinated.

"I need to get an experimental medical procedure -- an experimental gene therapy -- so that I don't kill my grandma or my grandpa? That's coercion. That's not an argument," he said.

But, Bean said "if individuals were able to see what we see in our ICUs on a daily basis with critically ill patients, they would have a different perspective. This tragedy is completely preventable if individuals get vaccinated."

Boyd added that covid-19 has long-term consequences that are not fully understood yet.

As long as a significant portion of the population is unvaccinated, Johnson said, "more people are going to contract the delta variant, which leads to more hospitalizations in our community, and ultimately, more deaths." Also, the virus will keep having chances to mutate, he said.

"We're not likely to see the end of the covid pandemic until we're able to get more of our population vaccinated," Johnson said.